The 2004 NPS led rehabilitation of Fredericksburg's famous Sunken Road and the Stone Wall, proved to be a vital element in understanding one of the Civil War's most famous photographic images. The wall had served as a ready-made breastwork for Confederate forces in both the 1862 and 1863 battles, but had over time disappeared from the landscape in the places where it had stood above grade. There had long existed a story that purports the wall was dismantled and the stones used to build the National Cemetery's caretaker residence, but that is now said to be false. The actual fate of the wartime wall is still undetermined. 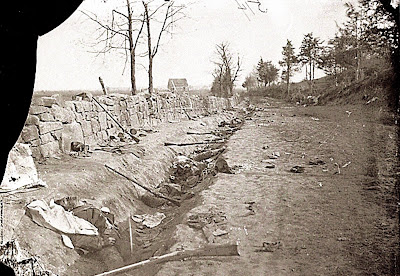 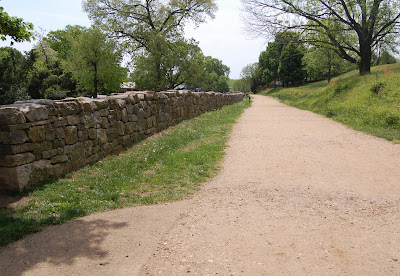 Archaeological surveys located the footings for the original wall and period images helped determine the size and shape of what was once there. Master stone masons were employed to build the approximate facsimile. Modern engineering requirements necessitated an additional four inches be added to the base width of the wall and a supplemental "cover course" of stone was added to the top as a desirable protection from the elements. All in all the new wall serves as a satisfactory visual to enhance today's visitor experience.

As mentioned in the opening paragraph, having the wall return to the landscape was a tremendous tool for determining where the May 3, 1863 image by military photographer Russell was taken. In early October 2004, I began to take test images during pedestrian surveys, gradually finding that the presumed position was far off the mark. Having the great benefit of learning 19th century camera optics from modern day wet plate photographer Robert Szabo, I returned on several occasions to re-shoot and measure until I had found the perfect fit between today's landscape and that recorded just minutes after the Federal success that routed Confederate forces from the scene. In early December 2004, Bob Szabo joined me on location to record a 8 1/2" X 6 1/2" ferrotype image with his period equipment. The resulting image was dead-on and reaffirmed that we had indeed located Russell's camera position. Writing in a 2005 issue of North South Trader's Civil War Magazine, the Park's Chief Historian John Hennessy credits our work for "determining that the location was about 220' farther north than traditionally believed. Based on their meticulous work, the site exhibit that includes the photograph was relocated."
Today's visitor can easily stand in Russell's position by facing southward, standing between the Cobb and Stephens markers, stepping slightly to the left, off center. The first body closest to the viewer lay a mere 20' or so in front of the camera. The current edge of the grass line also approximates the vicinity of the wartime "ditch" which was not feasible to recreate in the modern setting. 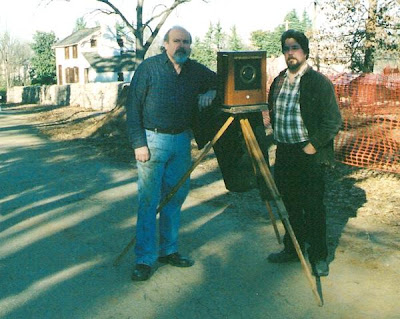 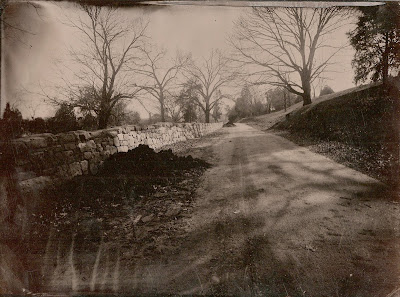 Bob's ferrotype version of the Russell image. The pile of dirt seen at
left is from the then ongoing NPS rehabilitation work.

One issue that this detailed study also helps determine, in my opinion, is that the "trench" dug approximately five feet behind the wall, is more likely to have served as a drainage ditch rather than a military instrument. The strongest support of this notion rests in the fact that it appears to have continued, outside of the camera's view, in front of the then standing structures of Martha Stephens' modest dwelling. Additionally, there had been a very obvious effort at removing all the resulting earth turned up in creating the ditch, something that just seems out of place if created for military purposes, and its depth and width are negligible if they were intended as a means of additional shelter, even for a second rank of men. Standing soldiers behind a front rank against the wall would not have attempted firing their weapons at that great a spacing.

Of note is the visible home of James Hall, seen just over the wall in Russell's image, at left of center. Hall's house was totally dismantled by soldiers (for its burnable wood) by the time of the next image taken in this vicinity the following year. 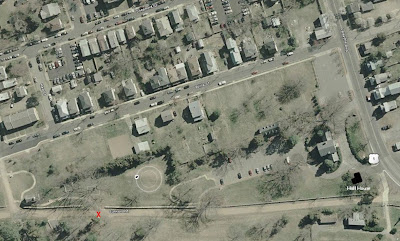 The areial image above shows Russell's camera position marked
by a red X and the location of the Hall house is indicated near the
modern day visitor center.
All images posted are clickable to provide a larger view. 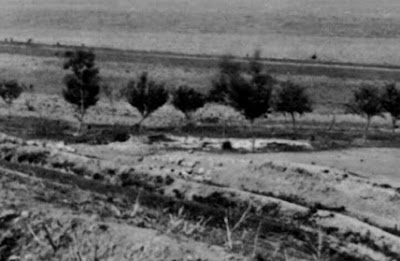 A detail from an 1864 photograph, showing the foundation
remains of the James Hall house surrounded by a cluster of trees.
Posted by John Cummings at 2:31 PM

This is outstanding work, John.

This is a great article, with solid research. However, I do not agree with the assertion that is merely a "drainage ditch" with no martial bearing. In fact, I believe you can plainly see the "relocated excavated dirt" up along the wall, thus creating the distinct "step" seen to the immediate left of the ditch itself. I should think that was created - as always assumed - so men could stand in "relative" safety while loading weapons which were then handed up to those kneeling behind the wall itself. In addition, the ditch looks to be a relatively fresh marr on the landscape, with no noticable effects from water run-off. Just the observations of a Civil War student.

Dave, I appreciate your comments. I will however offer some additional thoughts of my own as to why I will maintain that the ditch is indeed a ditch. First, as to the advantage it would have provided for additional cover, that would have been minimal considering that it is hardly a foot deep toward the middle of the road. Second, it is dug like a trough or gutter with a rounded bottom better suited as a channel for runoff. I believe that what we see was an effort by the locals to create a somewhat elevated pedestrian "sidewalk" so that the entire roadway was not a mire during periods of rain. If seasoned veterans had been dispatched to create an improved defensive position I think the construction of it would reflect characteristics of other earthworks, chiefly squared off sides and bottom and at least another foot deeper.
What could be construed as a firing step on the left edge is strictly coincidence. Bear in mind that the road grade we see today is not a reflection of the wartime grade. The ground closest to the wall was higher than the middle. John Hennessy went on further in his article to state that the present road surface "rides between six" and twelve" above the original level."
That's my take on it.

One more thought regarding the ditch behind the wall. Logic would hold that the "relative" safety of men in the rear would not have been achieved at the expense of those on the actual firing line. Placing the removed dirt of the "trench" on top of the ground to the front would have decreased the protective height of the wall and compromised the men crouched behind it.

John, Good thoughts, and knowing the grade has changed does matter. The idea of a "separate pedestrian walkway" makes sense, but I am still puzzled by the depth of the ditch. Would sem to be a public nuisance in some ways. It seems too deep for a mere drainage ditch, but then I am hardly an expert on drainage patterns at the foot of Marye's Heights. Either way, your work remains a great piece of detective work and you are to be applauded for your effors. Keep up the great work.