The current class of newly commissioned United States Marine Corps officers visited the Chancellorsville Battlefield on March 22, led by one of the expert historians from the Marine Corps University. During the twenty-six week long Basic School, or TBS, the new officers are provided with extensive classroom, field, and practical application training on subjects ranging from weapons and tactics to leadership and protocol. The TBS mission statement explains they will "Train and educate newly commissioned or appointed officers in the high standards of professional knowledge, esprit de corps, and leadership in order to prepare them for duty as company grade officers in the operating forces, with particular emphasis on the duties, responsibilities and warfighting skills required of a rifle platoon commander." 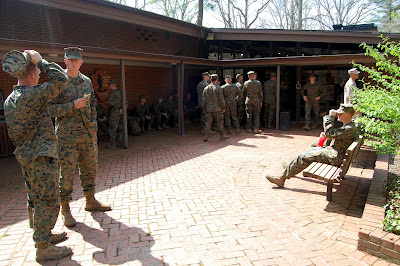 After their tour the class had an opportunity to relax and check out the Visitor Center. 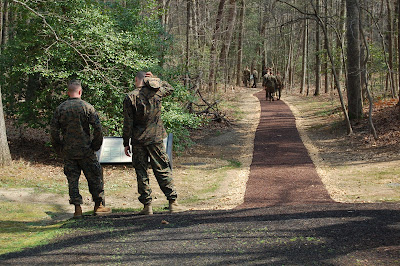 Many visited the site of General Stonewall Jackson's mortal
wounding and associated monuments and markers. 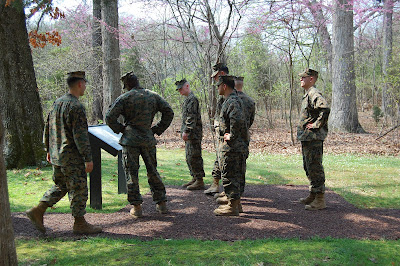 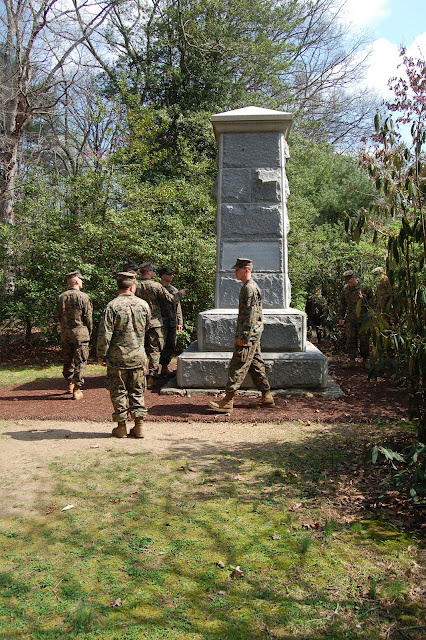 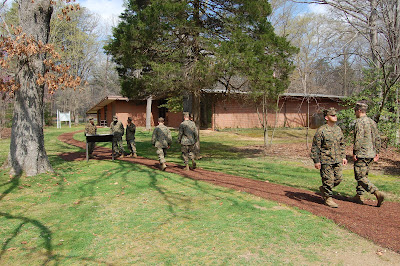 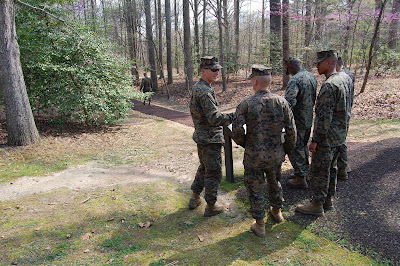 They were particularly interested in the circumstances that led
to Jackson being accidentally fired on by his own men. 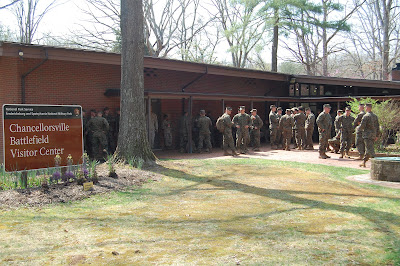 The discussions continued on the front lawn at CVC. 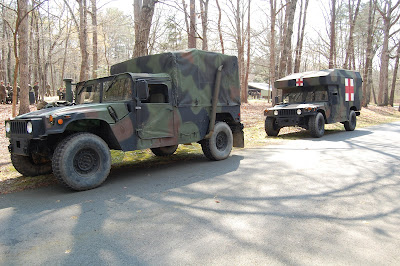 Support vehicles followed the convoy of six buses, as seen below. 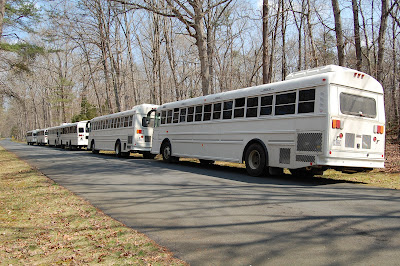 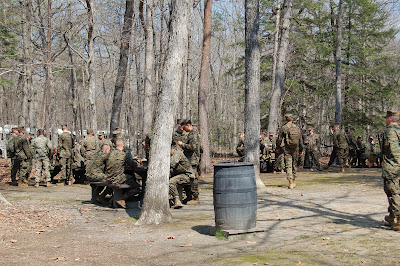 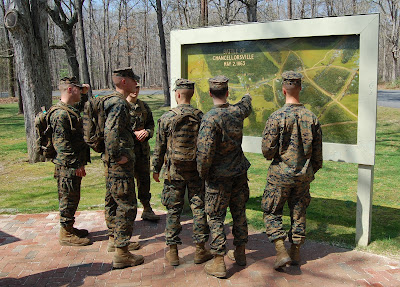 They were very impressed with the battlefield and the park's interpretive signs. 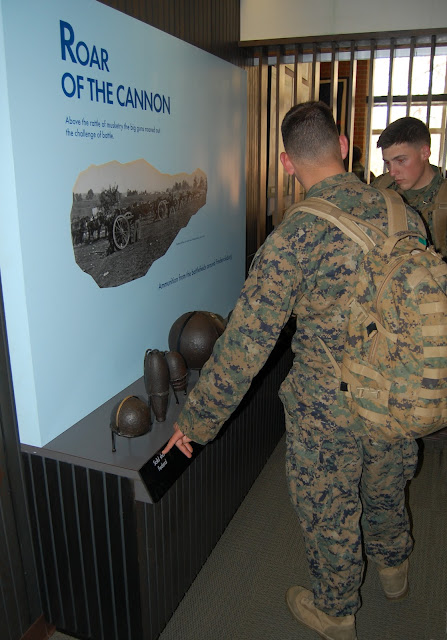 This display of Civil War artillery projectiles got a lot of attention. 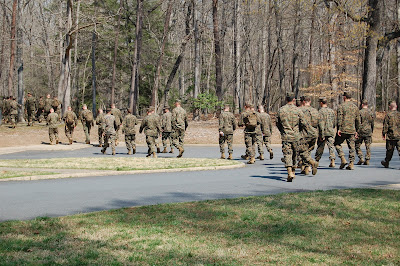 Around 1:30 PM, it was back to the bus convoy for the return trip to Quantico.
﻿
Posted by John Cummings at 4:35 PM No comments:

Along the North Anna River - Then and Now

The 20th Annual Meeting of the Civil War Fortification Study Group provided a rare opportunity for members to visit the site of one of the Civil War's rare images of entrenched soldiers during an active campaign. This was originally a Confederate fortification, known as Henagan's Redoubt, which served as a means of protecting the north shore approach to the North Anna River at the Chesterfield Bridge crossing of the Telegraph Road. This vital position was captured by Hancock's Union forces on the evening of May 23rd, 1864. The photograph below was taken by Timothy O'Sullivan on May 25th, as the armies glowered at each other. By this time the works were occupied by men of Burnside's Ninth Corps. The next day the Union army, having tired of what was essentially another stalemate similar to their experiences of the Wilderness and Spotsylvania, pull out and swing to the left in their continuous effort to get closer to Richmond. The fields around Cold Harbor awaited them. 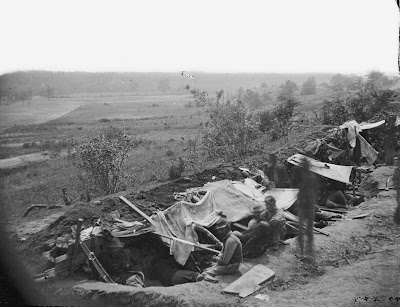 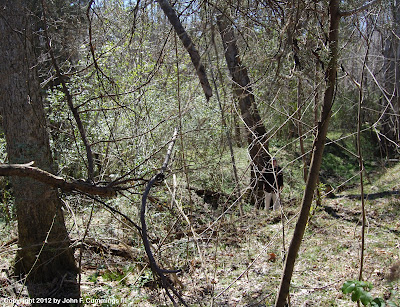 March 10, 2012, the silent position is now overgrown.
A member of the C.W.F.S.G. stands at right of center to provide scale.
NOTICE: This is private property, DO NOT TRESPASS.
Posted by John Cummings at 12:41 PM 3 comments:

Be sure to visit the October 12, 2012 post by clicking here.
It contains the most current information.
Also updated in the body of this post below. See red text.

Yesterday, in a comment to my initial post on the Harvest of Death images, blog reader Phil Spaugy said...
"The problem I have with this view, is the lack of confederate dead, or the signs of freshly dug graves."

This is a very good point, and one that I had not given much thought to during my examinations of these images since my concentration has been, till now, on the exposures taken by Timothy O'Sullivan which include what I believe is the Thompson house on the north side of Chambersburg Road, rather than the James Gibson exposures which do not include the house. The O'Sullivan images suffer from an as of yet firmly explained lack of strong detail beyond the fence running across the middle ground. This fence is what I consider to be the northernmost of two fences that contained a field running roughly northwest to southeast, toward Seminary Ridge, from the woodlot where General Reynolds was killed on July 1, 1863. Now, looking at the Gibson exposures, I notice that the area beyond this fence is a slight bit richer in detail than O'Sullivan's, and seems to contain what may be the solidifying clue to this series' location.
Mr. Spaugy's point is well taken, and I answered his comment by pointing out the lack of detail where the graves of the Confederates should be, simply based on the O'Sullivan exposures, however, now considering the Gibson exposures, I believe we have indication of the Confederate burials right where they should be. I had also suggested that the Confederate dead had been buried in the days following the fight on Seminary Ridge as the ground remained under Confederate control. The Union dead were left in situ after being relieved of usable clothes, valuables and equipment. A print from the Library of Congress collection is seen below. 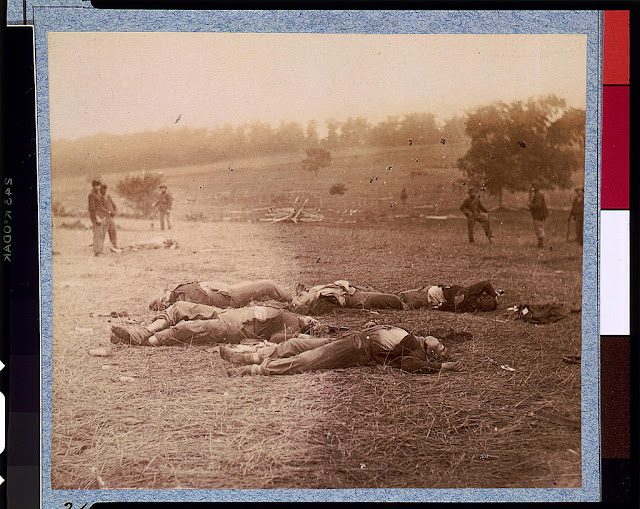 The contrast is sharper and the details stronger in this print of James Gibson's exposure.

An enlargement of the middle area of the above print reveals a potential clue...

Beyond the fence pile, running at a diagonal, as indicated by the annotating arrow, are we able to see crudely marked grave rows? Elliott's burial map places graves within this proposed field of view.

Continuing right, along with the possible graves, are we also able to see a breastwork, or more graves? Based on Elliott's map, these would all be Confederate burials.
Update: 2/25/2013, based on more current consideration, the suggested "breastwork" noted above, may in fact be the Chambersburg Pike and a few visible fence posts. This study continues to be fluid. 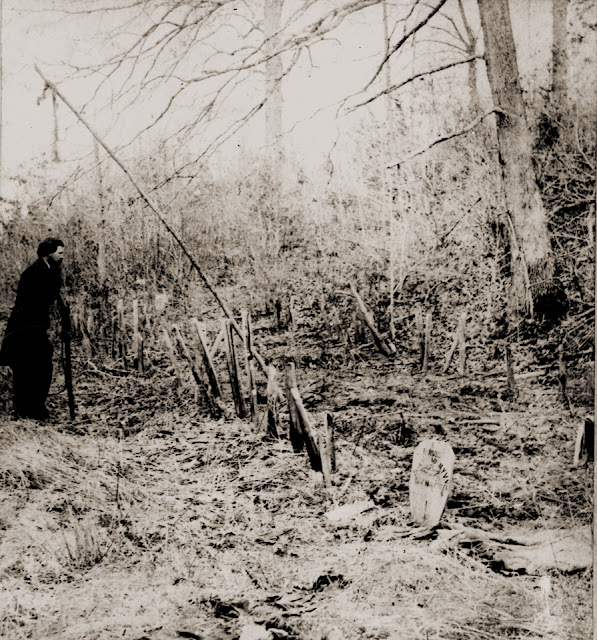 Note the similarity of crudely marked graves from this 1866 image taken near the Wilderness Battlefield. This image and its location are examined in this blog's previous post from 2-29-12.