The Imprint of Human Experience and the Juxtaposition of Place and Time. Back to the Future. 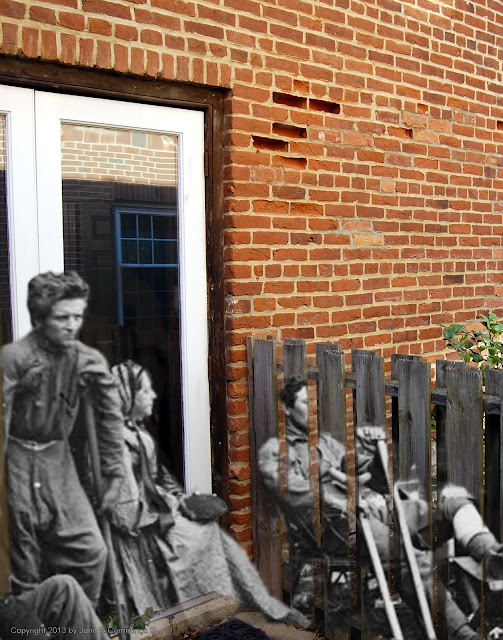 Behind a Charles Street warehouse, Fredericksburg, Virginia. Wounded soldiers of the Union Sixth Corps, May 20, 1864. Obstructions at the location today severely limit the scope of a then and now comparison, thus the radical degree of cropping from the original exposure, seen below, by James Gardner. 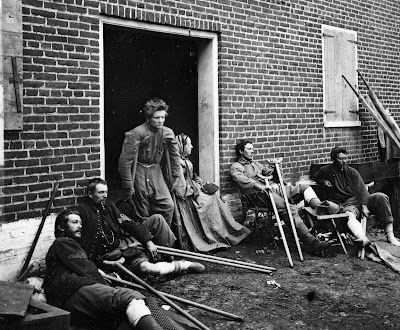 Below, taken diagonally northeast across a former courtyard from the above scene, the Fredericksburg Baptist Church on Princess Anne Street. The courtyard today serves as a parking lot for local merchants. This composite photograph illustrates a car occupying this precise location, seemingly drawing the attention of the 1864 onlookers. What an experience that would be. Where is Marty McFly? 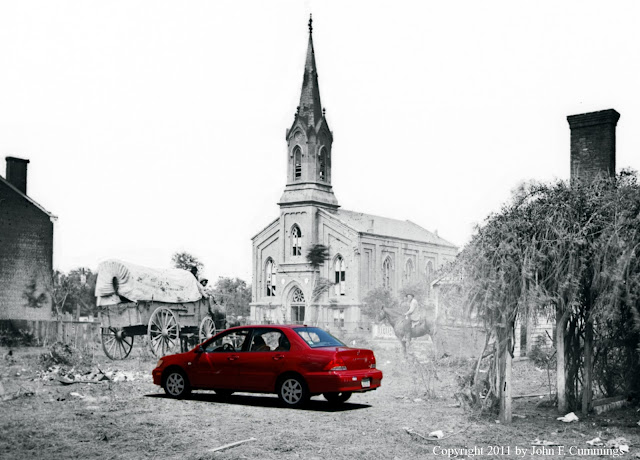 Friday, May 3, 2013. The village of Spotsylvania Courthouse is preparing to host a rather large-scale, commemorative reenactment of the Battle of Chancellorsville for the 150th Anniversary. The scale of the event is immense. Traffic into the region is anticipated to be very heavy, with tens of thousands of spectators anticipated over the two day event. Meanwhile, on the actual Chancellorsville battlefield, about six miles directly north of this site, the National Park Service has been hosting wonderful tours and interpretive programs.
Your blog host will be on hand with camera at the ready. We shall see what we shall see. 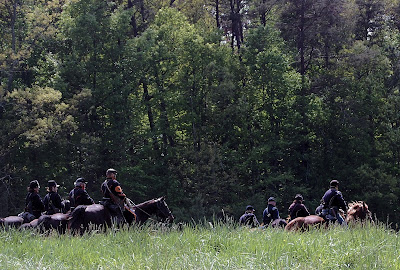 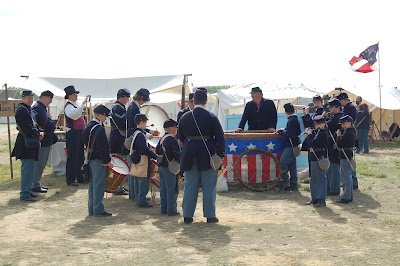 Military musicians of all ages gather to entertain the troops. 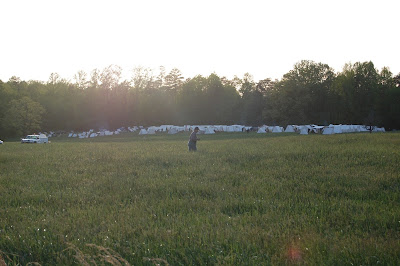 Huge camps begin to cover the landscape. This one is right to next to a Spotsylvania Battlefield,
National Park Service border, near Burnside Drive and Route 208. The open field is NPS property. 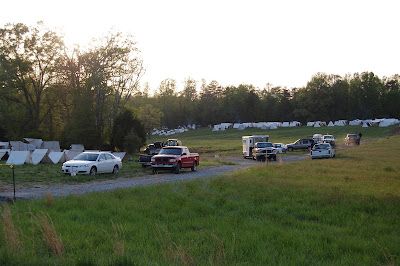 "Union" camping area is separated from the NPS property by this gravel road put in place for the event. 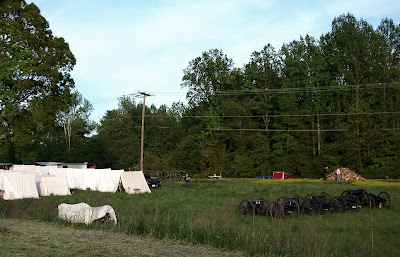 In a wedge of land recently created by the Courthouse Bypass, an artillery page has moved in.
With perhaps four thousand re-enactors now expected to attend, this will be the largest gathering of the blue and gray on this ground since May 1864. It will be an interesting weekend to say the least.

Posted by John Cummings at 7:28 AM No comments:

Thursday, May 2, marked the 150th anniversary of Stonewall Jackson's famed Flank March as well as his accidental mortal wounding by the 18th North Carolina Infantry. Stevenson Ridge and the Friends of the Fredericksburg Area Battlefields marked this Sesquicentennial moment by presenting their second annual Civil War symposium. Forty-five registered attendees and others convened in the basement meeting room of the Riddick House, an 1812 Plantation House moved to the site from Como, North Carolina in 2003.
Guest speakers at this year's event included, Daniel T. Davis, Chris Mackowski and Kris White, all up and coming historians and noted bloggers from the collective, Emerging Civil War, which features a stable of writers. Mackowski and White have recently coauthored a long awaited volume on the battle of Second Fredericksburg, entitled Chancellorsville's Forgotten Front, published by Savas Beatie, and released just this month.
Next year's symposium will be held in a new venue, the historic Spotsylvania Court House itself, and cover the 150th anniversary of the battle fought there. Check this link for updates. We have already begun to assemble our lineup of speakers. It promises to be exciting. 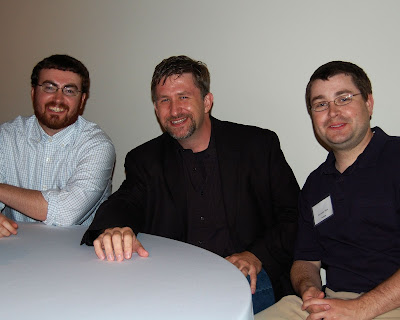 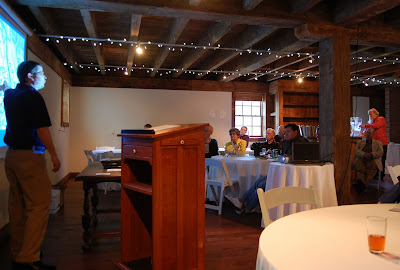 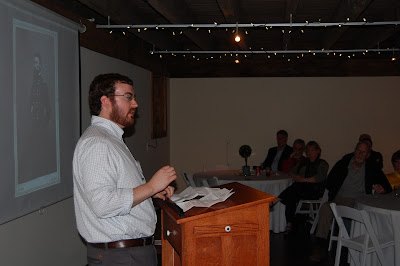 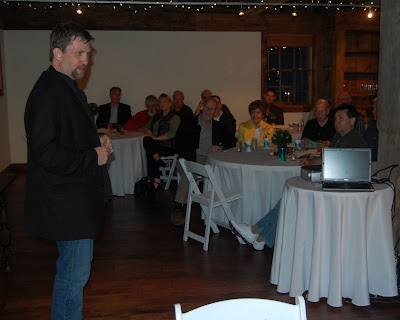 Chris Mackowski transported the audience through the last days of Stonewall Jackson.
Posted by John Cummings at 8:40 AM No comments:

On May 3rd and 4th, 2008, the 145th anniversary of the Battle of Chancellorsville was commemorated on the actual ground where the opening engagement had occurred on May 1, 1863. The site had recently become one of battlefield preservation's greatest victories. A coalition of local and national organizations had come together to campaign against a Northern Virginia developer that was seeking a rezoning of the property. The proposed "Town of Chancellorsville" was offering 2,000 homes and 2.2 million square feet of retail and office space on 781 acres along Route 3, the historic Orange Turnpike. The debate became a national concern with a press conference by he Civil War Preservation Trust in July 2002. The collective efforts of the "Chancellorsville Coalition" tirelessly campaigned against the threat. Finally, in March 2003, the rezoning request was denied by the Spotsylvania County Board of Supervisors.
Five years later, the largess of the Civil War Preservation Trust, in cooperation with the Spotsylvania County Government, and Tricord Homes, permitted the commemorative event seen here, acted out in the very footsteps of the soldiers engaged in 1863. It was a rare opportunity for the reenactment community to hold such an event on the very ground where history happened. Click any of the pictures for larger viewing.

Today, the property is open to visitors as the First Day at Chancellorsville site. An extensive trail system, with detailed interpretive signage, vividly presents the drama of the engagement. Visit the Civil War Trust's animated map of the opening battle by clicking here. 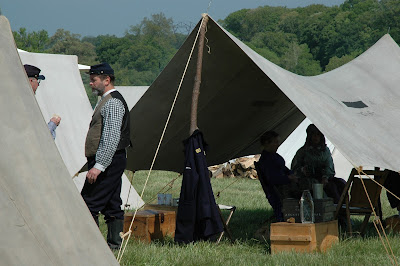 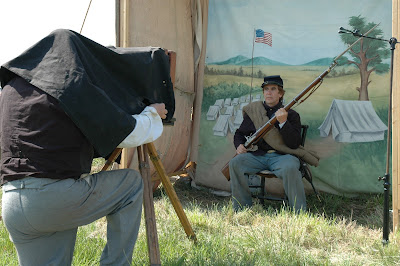 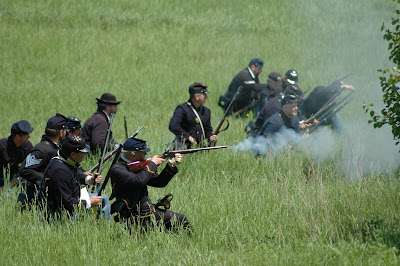 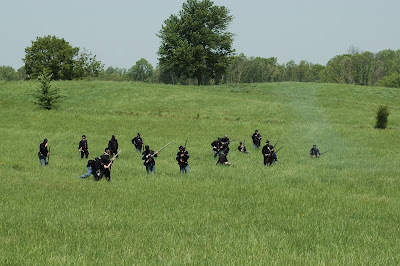 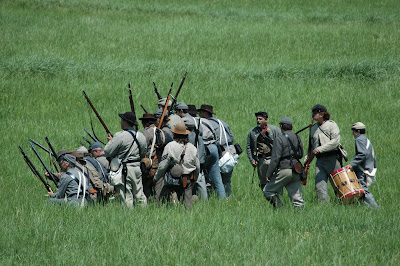 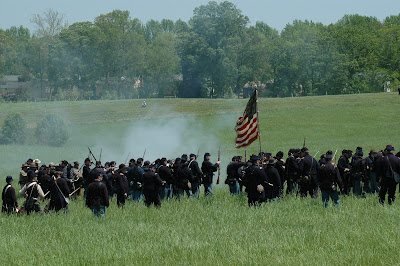 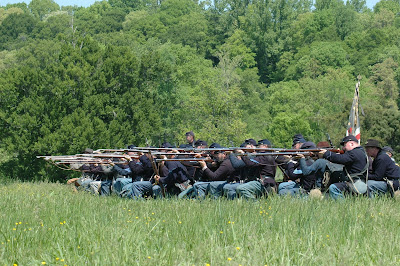 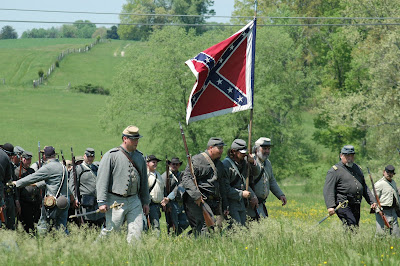 Posted by John Cummings at 8:59 AM No comments: