I would like to let my readers know that today is the official release date of my latest book, Spotsylvania County, published by Arcadia Publishing of Charleston, South Carolina. If you live in the Fredericksburg/Spotsylvania region it will be available in many local outlets. I will be doing signings over the 4th of July weekend, at the Spotsylvania Courthouse area and in downtown Fredericksburg. Also, if you are local and would like to pick up a copy ahead of time, or reserve one from the stock I have on hand, please send me an email. I have also included a direct link to order from my publisher at the right hand side of the blog. I have included over 200 images, many never before seen in book form. 128 pages. The retail price is $21.99.


Highlights from the book include:
1. The story of the formation of the county and its namesake Alexander Spotswood.
2. Photographs of structures no longer standing in the community.
3. Photographs of structures that have withstood the test of time and war.
4. On-site sketches by newspaper artists that witnessed the Civil War’s battles and their aftermath.
5. Photographs of local citizens that endured the hard times of post-war recovery.
6. The story of the memorials placed to honor those who fought here.
7. Highlights of the formation of the National Battlefield Park.
8. The local experiences of the Civilian Conservation Corp during the Great Depression.
9. Visual reminders of the Civil War still impressed upon the landscape.
10. Preservation efforts and the regional approach to good stewardship of historic and cultural resources.

The book is an honest assessment of a community dealing with a historic past not so warmly embraced. The Civil War was a debilitating, horrific period that left the region deeply scarred, socially and economically. To this day the County hesitates to commit resources toward encouraging tourism as a viable means of generating revenue.

Here is my author's bio from the new press release:

John F. Cummings III, 50, is originally from Fairfax County, Virginia, where he developed a lifelong passion for history, particularly the Civil War era. He moved to Spotsylvania in 1999 with his wife Karen, living on land that saw action during the Overland Campaign of 1864. Before moving south, John had worked as a Loss Prevention Auditor for a major DIY retailer in the National Capital Region.

A researcher and writer, John’s specialty is image analysis. His work as a visual historian has been published in national and local publications.

John was a member of the former Spotsylvania Courthouse Tourism and Special Events Commission, and serves as chair of the Friends of the Fredericksburg Area Battlefields, providing assistance to the National Park Service through support of educational programs, films and publications.

John spent his first decade in Spotsylvania documenting the local efforts of preservationists during one of the most active periods of battlefield encroachment by developers. He has witnessed the County government attempt to strike a balance between good stewardship and respect of personal property rights, all the while trying to maintain a sufficient tax base.
Posted by John Cummings at 5:13 AM 1 comment:

After much speculation and debate, there seems to be an answer in the case of the "Susan Alsop" photograph discovered in the attic of the Alrich house in Spotsylvania. See the original post here. Is this an early portrait of Susan M. Read Alsop, widow of James Addison Alsop? 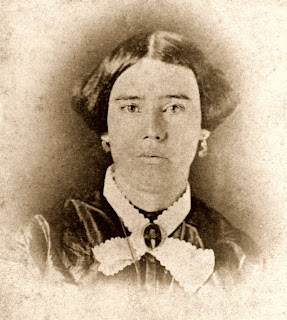 I would have to give an emphatic "Yes" based on caparison to a known post-war portrait kindly supplied by Alsop family genealogist Jerry D. Alsup. Jerry is currently working on volume three of his monumental family study, Alsop's Tables. The first volume was published in 1986 with the second volume following in 1994. 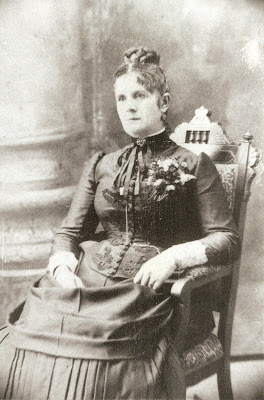 This identified image shows Susan M. Read Alsop sometime in the 1880s based on her clothing. She would have been in her 40s during that decade. The earlier image of which we have been uncertain shows a young woman dressed in the fashion of the 1850s. Susan M. Read Alsop was born on September 25, 1840.

I took both images and produced a superimposition to compare facial features. I was delighted to see an easy comparison of the craniofacial landmarks. At 50% transparency it is clear that there are no readily apparent deviations in the placement of the eyes, nose and mouth, suggesting very strongly that they are of the same woman with perhaps a separation of three decades. Both images even show a possible asymmetry of the nostrils, her left appearing larger than the right. 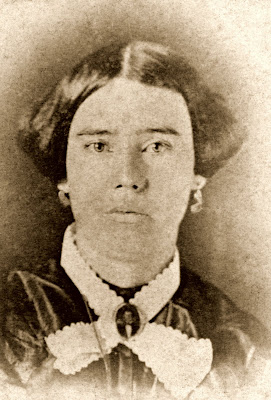 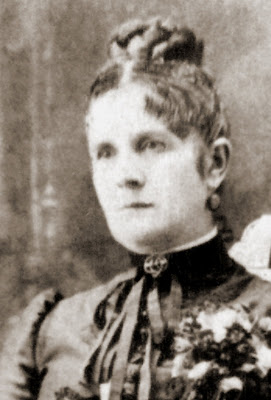 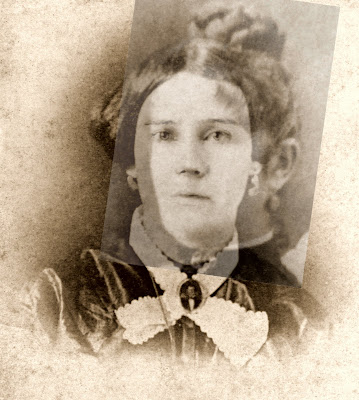 The only remaining questions regarding the older image would be as to how long prior to her marriage to James Addison Alsop was it taken, and who may the image be in her broach? One thing is probably most certain is that this was not an image of her in mourning following James' death in December 1860.
There is also the question as to how she was related to the Alrich family? Her son, John Addison Alsop had been married to Florence Chartters, a relation to the Chancellor and Leavell families. Hopefully the connection will become apparent soon.
Posted by John Cummings at 12:58 PM 4 comments: