Placing Some of the Dead at Widow Alsop's

Note: All images can be clicked for larger viewing.
Certainly, any battlefield photograph that shows the dead in situ has intrigued the public ever since Mathew Brady first displayed images of the dead of Antietam at his New York gallery in October 1862.
The May 20, 1864 images of Confederate dead on the Susan Alsop farm in Spotsylvania are a prime example, and have been most engrossing. For the twelve years I have lived near the site, and have studied Timothy O'Sullivan's series, I have been hopeful that I could make some solid determination as to where at least some of the images were made. The first obstacle in doing so was the uncertainty as to the precise location of the Alsop farmhouse. National Park Service Historian Noel Harrison and I have pondered this over the years  and together have become fairly comfortable with an approximate location. Only one image in the series had clearly specified that it showed the house and a small barn/stable, nearby. Using the official government map produced in 1867 by Nathanial Michler, I compared the terrain features depicted and found what seems to be the most logical match against a modern topographic map. Working with the Michler map, one has to be aware of the potential for distortions which occur when an individual surveyor's notes are married to a fellow surveyor's set. As an illustration, sometimes a farm field would be included by both men in their individual surveys, and instead of overlapping, the area is mistakenly plotted twice on the compiled map. One area of clear distortion is unfortunately within the sector of the Alsop and neighboring Peyton farms, making a simple overlaying of period and modern maps impossible. Fortunately, once the pattern of the distortion is recognized, one can compensate for the problem and adjust as needed. This has allowed for a reasonable placement of the house upon the modern landscape, one which we will examine later in this post. 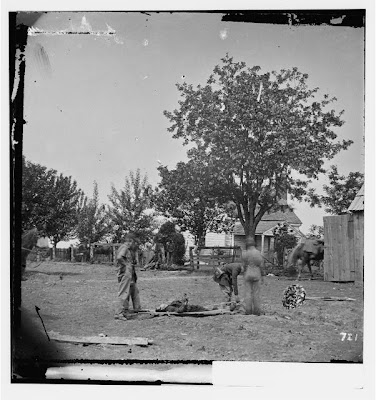 Another image in the series, taken prior to the one above, depicts two of the Confederate dead nearby on the property. The soldier immediately behind the pile of fence rails is clearly the same body as the one on the stretcher as was indicated by William Frassanito in his 1983 book, Grant and Lee, The Virginia Campaigns, 1864-1865.
A long overlooked yet vital clue as to the relationship of this image and the one of the Alsop house, is seen in the upper right of the horizon line. There, though not in sharp focus, appears to be the west exposure of the Alsop house, along with the surrounding trees that are readily discernible from the full house image. 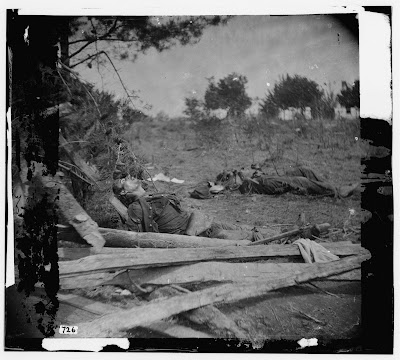 An enlarged detail of that portion of the photograph shows the
open window at right, and the surrounding trees of the home's western
face, making this approximately 80 yards to the east of these bodies. 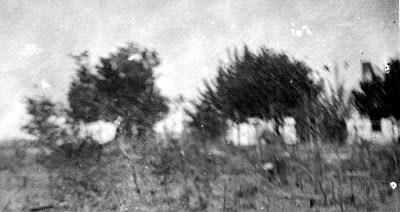 In the detail below, note the window and row of fanlike trees within the
fence, as well as the larger trees inside the field. The tree on the left edge
below is the tree at right of center in the above detail. 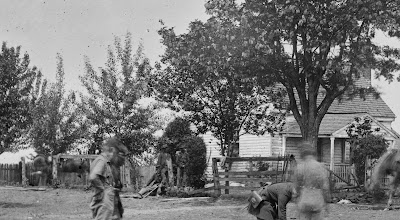 Below is my hypothetical interpretation of these images placed on the landscape.
The tree line to the north of the property is most likely where the original
image caption, "Scene at Mrs. Allsop's Pine Forest", was derived. When
viewed in stereo, there appears to be a sunken lane between the fence and
the woods, but I have opted to leave this possible feature out of my drawing. 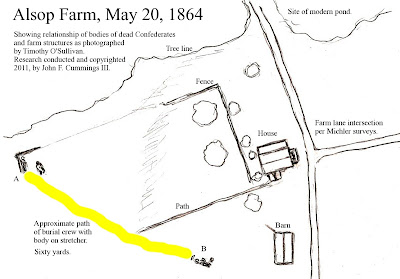 Based on this hypothesis, here are "then and now" comparisons.
Set One: Looking East From "A" 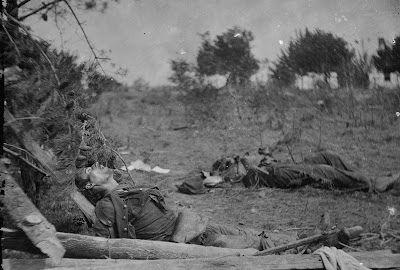 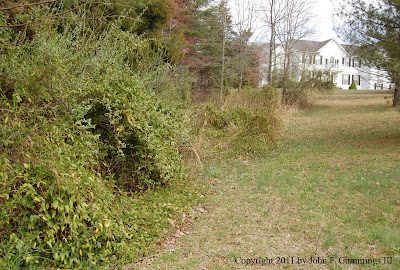 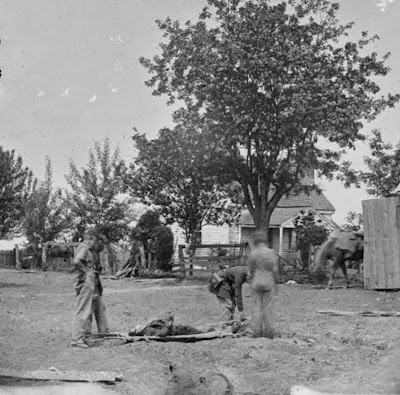 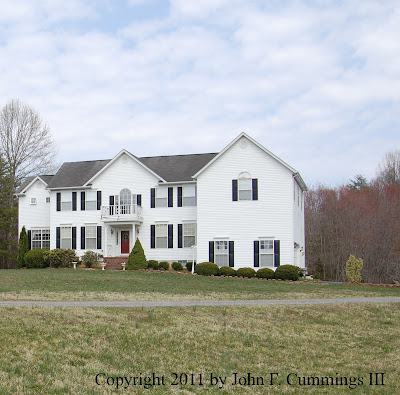 Over at the F&SNMP's "unofficial" blog Mysteries and Conundrums, Chief Historian John Hennessy has recently weighed in on his interpretation of the Alsop Farm images. You can read that here, at this link.
A satellite image of the area involved as it looked in 2009.
Note: The roads seen in this view are modern driveways with no historical significance,
and have no correlation with the farm lanes I have indicated in my diagram. 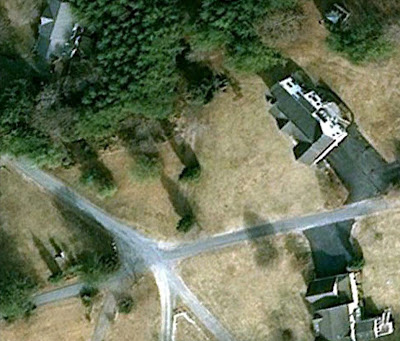 BE AWARE: all of this property is privately owned.
Please respect the owner's right to privacy.
Posted by John Cummings at 11:59 AM 20 comments:

Building the Spotsylvania Exhibit Shelter: Mission 66 - A Then & Now Look

In preparation for the fiftieth anniversary of the National Park Service in 1966, the Department of the Interior implemented a ten-year program of enhancement projects﻿ designed to improve the visitor experience. The program was dubbed "Mission 66." Among these tasks were the construction of modern interpretive facilities, replacing the rustic Contact Stations of the CCC era. In the Fredericksburg & Spotsylvania National Military Park, two new Visitor Centers and three Exhibit Shelters would be constructed to coincide with the anniversaries of the battles they'd interpret. The Chancellorsville Visitor Center was set to open on the first weekend in May, 1963. By July of that year, construction was underway for an exhibit shelter on the Grant Drive entrance to the Spotsylvania unit. By the end of April, 1964, the shelter was nearing completion, in plenty of time for the hundredth anniversary of the Spring Campaign of 1864. 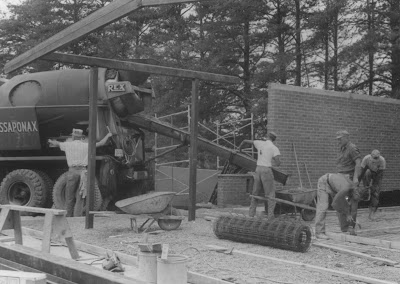 This September 1963 photograph documents the pouring of the concrete floor and patio of the Spotsylvania Shelter. It was built on a substantial cinder block foundation with brick walls and a heavy steel framework that emulated residential architecture of the day. The roof had four skylights to provide additional ambient light to the open air design. 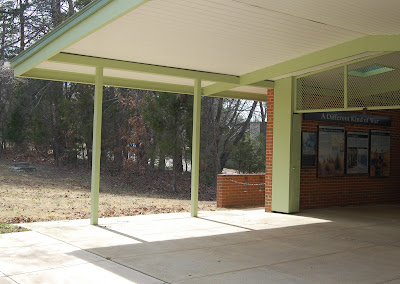 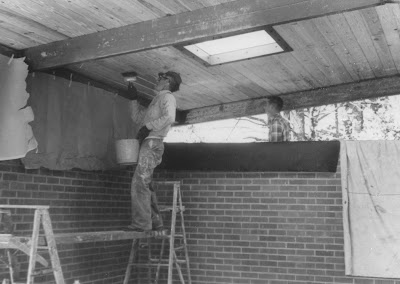 Prior to the installation of wire mesh to the open gable ends of the rafter
system, workers are seen here applying a clear sealer coating to the
natural wood ceiling planks inside the interpretive area. 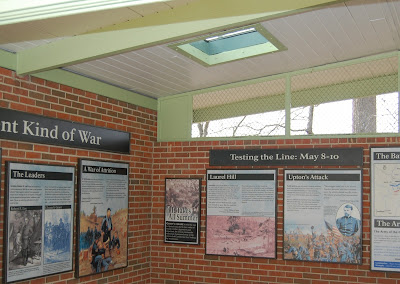 Over time, the natural wood look was replaced by a heavy coating of
white paint, providing durability and easier maintainance. Note the
skylight and wire mesh enclosed gable end. 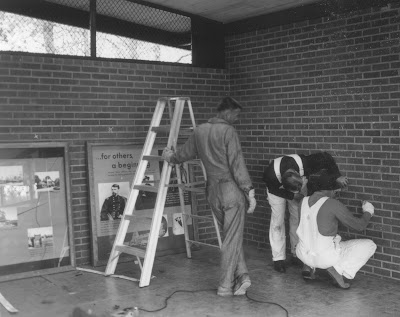 On April 28, 1964, the interpretive display panels were being installed. 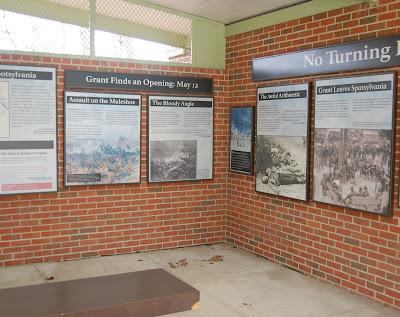 This approximate view of the same corner shows updated panels

and more engaging graphics installed around 2004. There is a continuing
effort to enhance the visitor experience. Photo taken February 22, 2011. 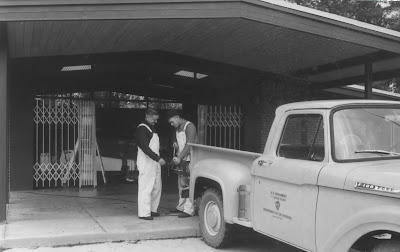 In another April 28, 1964 photograph by NPS historian Ralph Happel,

Peder Kitti and Frank Philips of the Department of the Interior's Branch
of Museums, prepare hardware for the mounting of the interpretive panels.
They were assisted by Freddie Paytes of the F&SNMP maintenance department.
Note the accordian style, gate enclosure for the shelter, rarely if ever, used today. 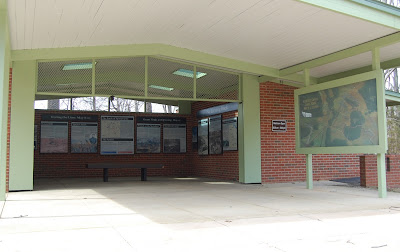 Approximate same view, February 2011.
The one-hundredth anniversary of the National Park Service will be celebrated in 2016.
Black and white photographs seen here are from the files of the F&SNMP.
Color photographs copyright 2011 by John F. Cummings III