Tomorrow is the 152nd anniversary of the death of the men seen in this photograph, taken by Timothy O'Sullivan, and published by Alexander Gardner. This is the image that has caused countless clamorings, as to its precise location on the battlefield, since first examined in a scholarly form by William A. Frassanito in his groundbreaking work, Gettysburg - A Journey In Time, published in 1975. The print below is most typical of published versions as they appeared in Gardner's Photographic Sketchbook of the Civil War. 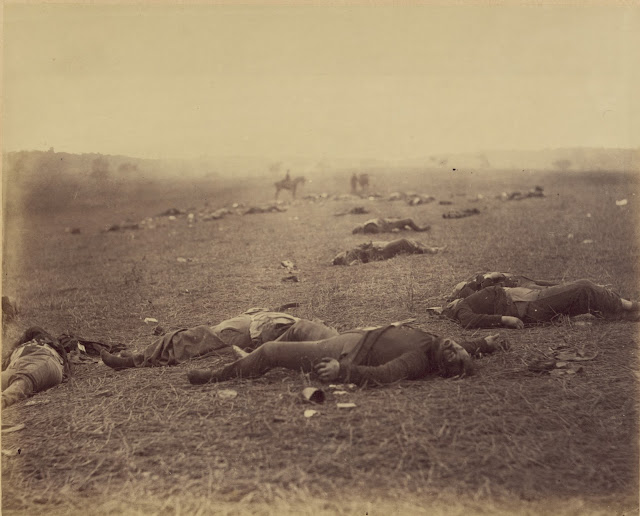 Below we have, as described by Frassanito himself, in his 1995 in-depth study, Early Photography at Gettysburg, "one of the best versions currently available, courtesy of the Chrysler Museum, Norfolk, Va.". Its merits are owing to the rich tone and thorough burning of the "horizon line, much sharper than prints in other collections. However, this horizon line is not true, it is a fabrication created by an opaque masking applied to the glass negative as well as artistic embellishments made to multiple print copies that were rephotographed to achieve a marketable composition from a less than stellar original exposure. I offered this subject in a previous post in September of 2012. But, after nearly three years, and the virtually ignored sesquicentennial recognition of this image's honored dead, it is time that these facts are incorporated in our understanding of the true nature of its creation. 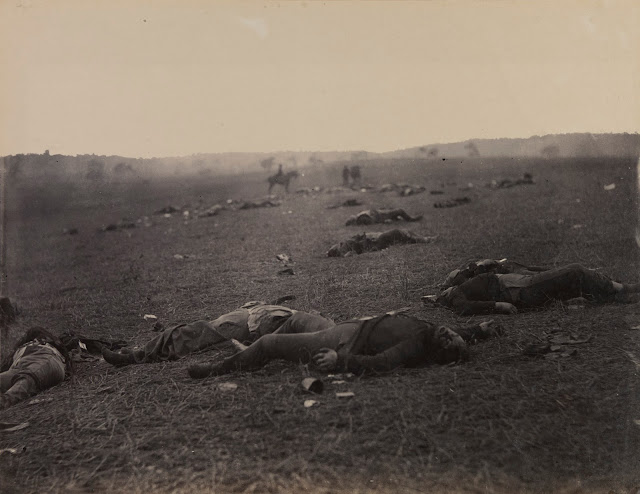 In the copy below I have drawn a black line to delineate the upper third of Gardner's creation. This is the area that was contrived. The process is clearly evidenced by magnification and the existence of progressively modified prints in two other collections. 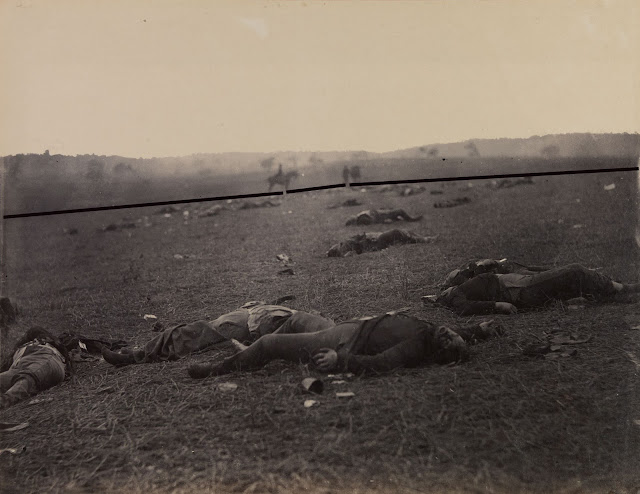 The first print we will examine comes from the collection of the Herbert F. Johnson Museum of Art, Cornell University, in Ithaca, NY. This version shows some of the first steps in defining distant ground as well as the appearance of a smudge or stain that will eventually become the basis of the "standing" figure. Notice the nonexistence of the mounted figure usually seen at left of center. Very evident pencil markings are seen, used to help define the horizon. This is one of the earliest stages in the creation of what was to become a century and a half old con job. 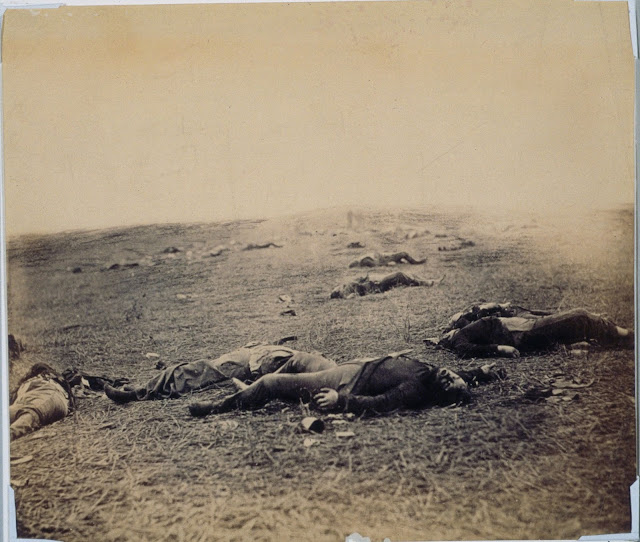 The next image, this time from the Library of Congress, Prints and Photographs Division, shows the continued progression of the ruse. The identical pencil markings seen in the previous print can be seen along with penciled in suggestions of what would become shadow trees in the final version. Also evident is the further enhancement of the standing "smudge" man and the suggestion of a riderless horse. To the left of center is the crudely drawn beginnings of what will become the mounted figure. Over burning has begun to fill in the sky below an initial masking, creating the false horizon. 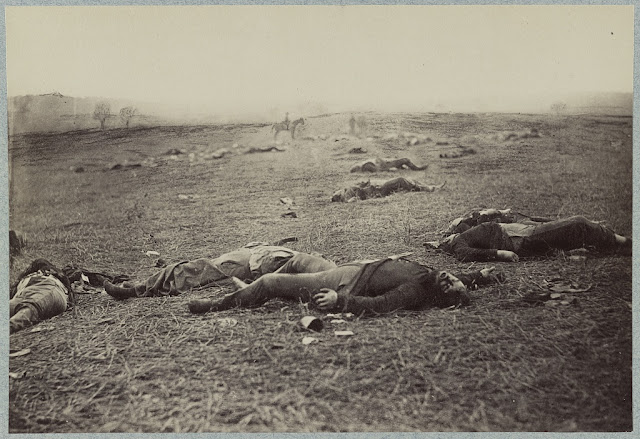 For clarification purpose, here are the tops of the two prints so that the reader can see the gradual building up of the composition that we have come to know as A Harvest of Death. 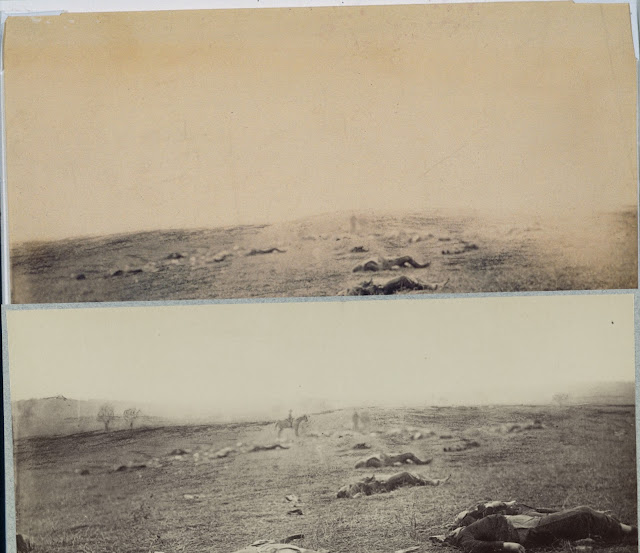 Below, I have enlarged a detail of the Cornell print, showing the pencil work and the origins of "smudge man", and the clear absence of the mounted figure. Note the bright, artificial sky. 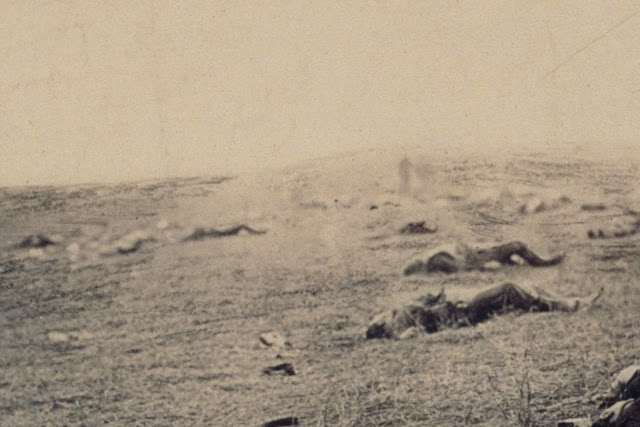 Here is the Library of Congress print with the same enlarged area. Identical pencil work, and the first suggestions of the additional mounted figure. 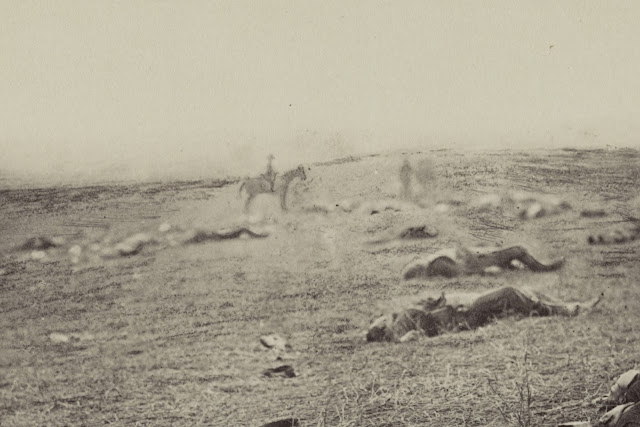 The next three enlargements are from the Chrysler Museum print. There is a very obvious painted edge of the false trees, created by the application of opaque material to the glass negative. These are not real trees silhouetted against a bright sky, They are a darkening of the area not covered by the opaque masking with a longer exposure during the print out process. The pattern made by the brush bristles is evident as well. The remaining print has no strong, contrasting white area. It is muddied. Opaquing the sky was a common practice with Gardener. Many of his negative show this, and in this case the process was used to essentially create a piece of art from an otherwise flawed negative. Note also the shadow trees against the false tree line, identically place where the penciled trees appear in the Library of Congress copy. Gardner's stereo version was created with a similar process as I also documented in a post from June of 2013. 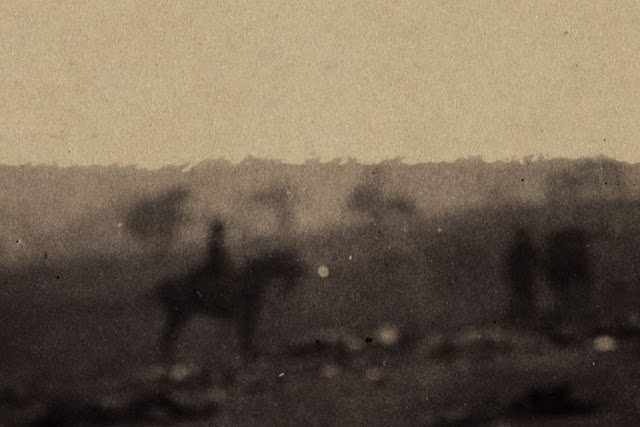 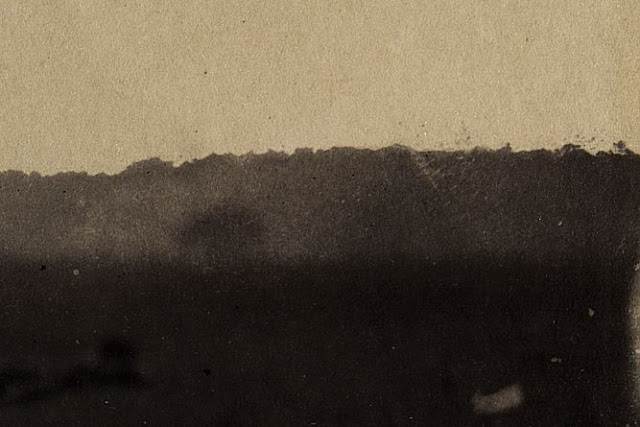 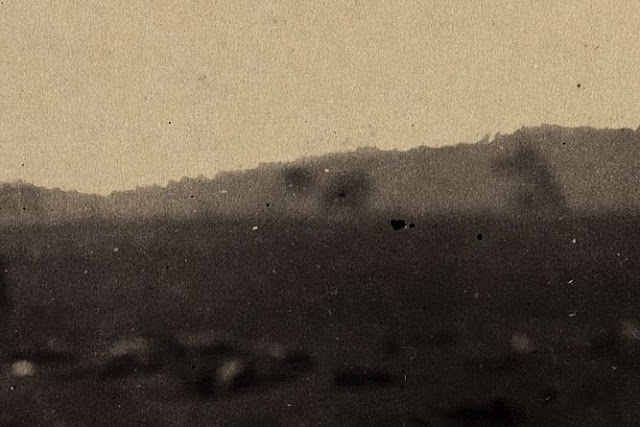 Additional material on this and its companion photograph are available at the links below: