In the late summer of 1864, as Union General Sherman was pressing his forces around Atlanta, there was cause for concern that the POW stockade at Andersonville, Georgia could be overrun, allowing the liberation of the Union men held there. In an effort to prevent this, a stockade was prepared in Florence, South Carolina, approximately 90 miles north of Charleston, and it was to there that the able bodied prisoners of Andersonville were to be transferred by train. The first prisoners would arrive in September. In the five months this stockade was in operation, as many as 18,000 Union soldiers were held there. With an initial death rate of 20 to 30 men a day, a total of about 2,800 would perish. Among them were as many as 14 of the Pennsylvania and New Jersey soldiers captured on May 14, 1864 during the fighting on Myer's Hill, near Spotsylvania Courthouse. Accurate death and burial records failed to survive the war, and these men may likely be interred in the 16 burial trenches containing 2,167 "unknowns", at what is now the Florence National Cemetery.
We visited Florence on Monday, October 18, on our journey back to Spotsylvania from a family gathering in Charleston. My special thanks to NPS historian Eric Mink for his last minute trip advice as we traveled up Interstate 95. 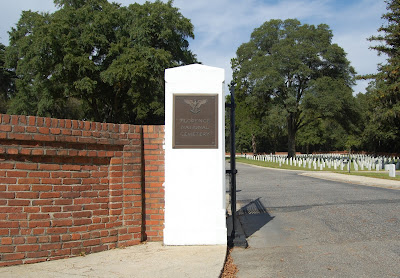 Entrance to the Florence National Cemetery 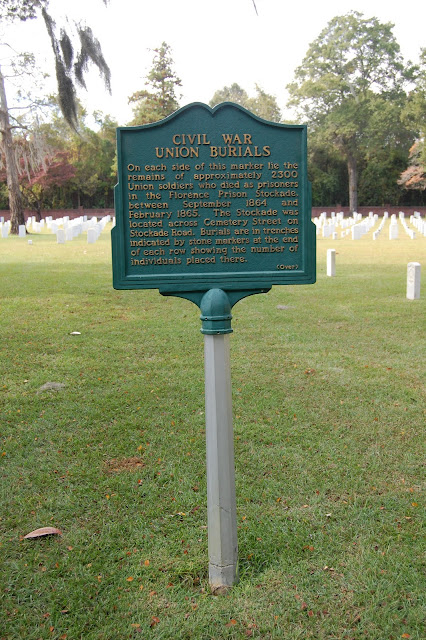 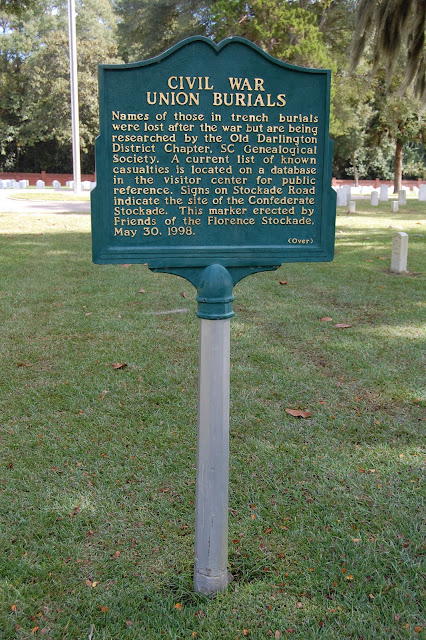 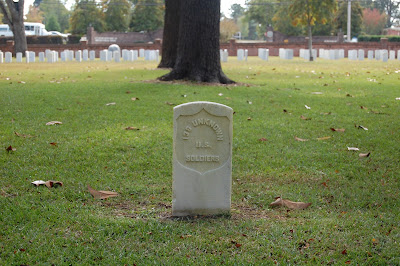 One of the 32 upright marble headstones that mark sections of the 16 burial trenches. 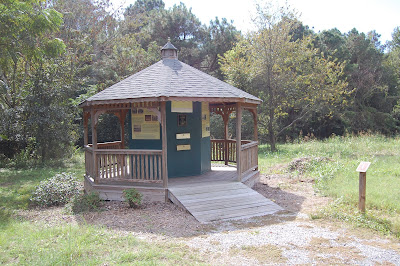 On the south side of the cemetery, at the end of Stockade Road, is the site of the former prison camp, maintained and interpreted by the Friends of the Florence Stockade, who have a Facebook page currently here. The above photograph shows an informational Gazebo with numerous illustrated panels detailing the history of the site. It is stop # 1 on a 16 stop walking trail. 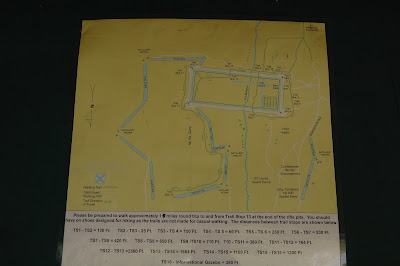 Map detailing the stockade and surrounding defensive works.
The stockade itself was 23.5 acres, 3 acres smaller than Andersonville. 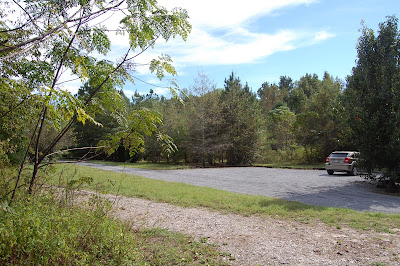 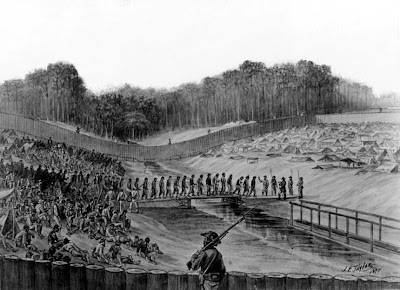 This illustration looks from the south wall along the sole water source for the prison, the Pye Branch of Stockade Creek. The drawings were created by James E, Taylor for Ezra Hoyt Ripple's published account of his experiences as a prisoner of war. Drinking water was taken from the northern (far) third of the creek, the middle was used for bathing, and the final third was utilized for the latrine, a wooden, open air facility seen at lower right, running along the creek length. Conditions are said to have been at least equal to and in some estimations, worse than those suffered at Andersonville. 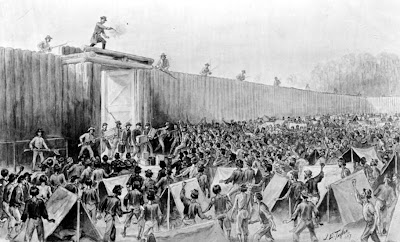 An incident at the Stockade, also illustrated by Taylor. Note the similarity to Andersonville's construction and prisoner living conditions.
Posted by John Cummings at 7:59 AM 5 comments: 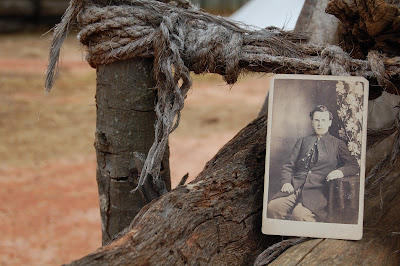 On May 14, 1864, Pvt. Jesse A. Adams of the 10th New Jersey Infantry Regiment was captured by Confederate forces overwhelming his unit during fighting on Myer's Hill, near Spotsylvania Courthouse. The above image features an original photograph of Adams taken shortly after his enlistment, November 14, 1861, by the regimental photographer, J. B. Brown. 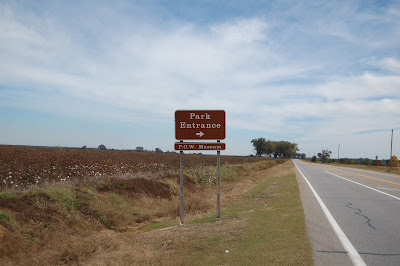 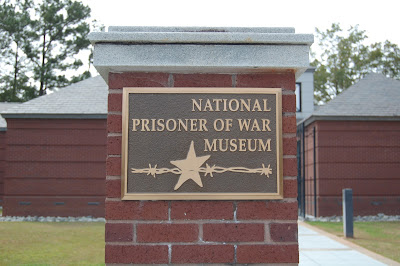 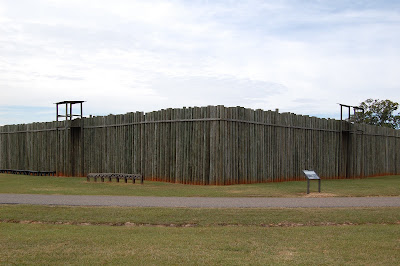 This is the reconstructed northeast corner of the stockade that contained the prisoners. The view is looking southwest. Towering above the walls are representatives of the guard towers that monitored the prisoner activities inside the compound. 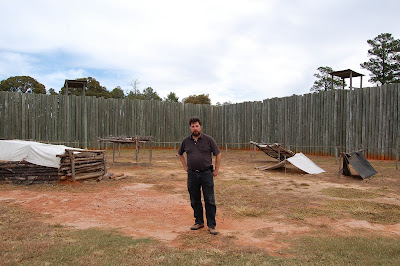 Inside that compound today are a sampling of makeshift shelters that prisoners struggled to maintain inside the 26.5 acre rectangular enclosure. Barracks that had been originally planned to house the prisoners were never built due to shortage of materials and manpower. 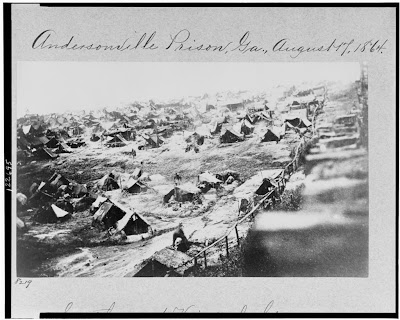 A photograph taken on August 17, 1864 from one of the guard towers, looking northwest. The top of the stockade wall is running along the right hand edge of the image. At ground level, just to the left of the stockade, is the infamous "dead line", which if crossed, would mean being shot by the guards above. 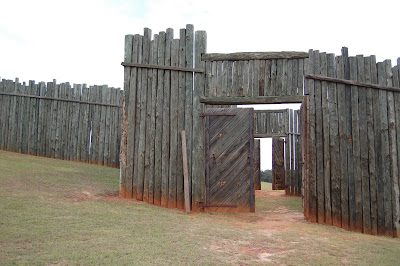 Here is the rebuilt "north gate" into the compound on the west wall of the stockade. Its name derives from being on the "north" side of a creek that flowed through the compound. A fellow inmate of Adams wrote of the horrors new prisoners witnessed upon arrival, "Once inside... men exclaimed 'Is this hell?' " 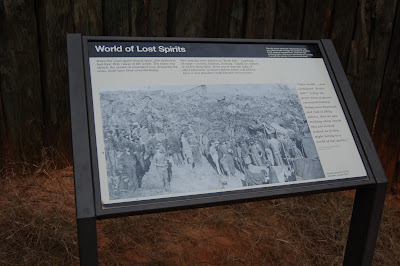 One of the NPS interpretive signs inside the gate. 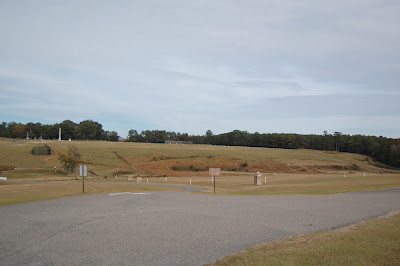 Looking across the site of the compound from near the southwest corner. The location of the stockade walls and dead line are indicated by white stakes. The location of the rancid creek flowing through the prison runs along the low area between the high ground. It served as a drinking and bathing water source as well as the latrine. Dysentery was rampant. Of the near 45,000 men held here, 12,913 would die from starvation, malnutrition, and disease. 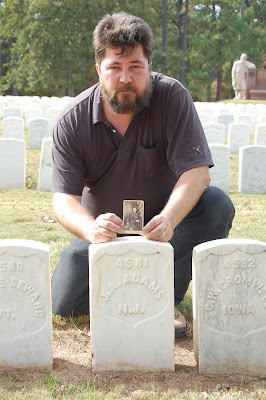 Among the dead was Jesse Adams, who succumbed to pneumonia on August 2, 1864,
a mere eleven weeks after his capture. His remains rest under the soil of Georgia.

For myself, as a student of the Civil War for now over forty years, my visit to the Andersonville Prison site in 2008 was a profound experience. I have visited many battlefields and had been to the location of POW facilities in Richmond, Virginia, chiefly Belle Isle, where approximately 1,000 prisoners died out of 30,000, and the former location of Libby Prison, but visiting Andersonville changed it all for me. I can't see the war in its entirety in the same light as I did before. It is no longer simply the strategy and tactics of battles or the clash of political ideals. It is no longer "Still Rebels, Still Yankees" as Donald Davidson opined.
Posted by John Cummings at 8:31 AM 9 comments: