The Battlefield of First Manassas - Then and Now, Isolating the Details, and Camera Location

This post contains REVISIONS, based on continued examinations of the ground on March 31, 2018. These revisions are made to clarify and correct certain aspects that were made two years previous. The chief factor that lead to these corrections was the mowing of a field covered with five foot grass. The tall grass was an unfortunate obstacle that caused a misperception as to the camera position assumed in March of 1862. The misperception did, however lend itself to a better understanding of the terrain beyond the ravine seen running across the middle ground of the photograph. This did enable certain features to be identified in their present condition, and better understand the visual aspect of the fighting on July 21, 1861. I would like to thank Keith Knoke who patiently discussed with me my errors prior to a return visit to the site. The important correction is the confirmation of the original camera position, which was indeed some 140 yards straight back from the position I utilized, as originally determined by Keith Knokes and James Burgess.

The camera location for this March 1862 photograph by Barnard and Gibson had been speculated on for many years, and in the March/April 2004 issue of Military Images Magazine it was examined by historians Keith Knoke and James Burgess. Their work correctly placed it along a former fence line on the Robinson Farm, overlooking Henry House and the ground to its east. In October of 2015, The Center for Civil War Photography ventured to Manassas for its annual seminar, taking their attendees along the same tree/fence line, to a similar location selected by the group's vice president, Garry Adelman, and published previously in his 2011 book, Manassas Battlefields Then and Now. In December of 2015, the National Park Service installed numerous new interpretive signs throughout the Manassas National Battlefield Park, including one based on the work of Knoke and Burgess, but located some what off because of obstructing trees. Bottom line, for all intents and purposes, it is the correct camera location, give or take a few feet, here or there.
Beginning on October 29, 2015, and concluding on December 4, I began my own investigations of the site, with the initial intention of duplicating the necessary elevation of the camera suggested by Knoke, Burgess, and Adelman, a height all had postulated was made by the Barnard and Gibson camera being placed on the roof of a barn or similar structure. My idea was to work along the fence line, beginning at the furthest southeast corner of the suggested Robinson fence, and make adjustments as I went. It was easy, going into the project, to automatically assume the fence seen in the foreground of the original stereoview was indeed the same site found today, just as my predecessors had done. Start with what seems to be the obvious. However, even with mounting fences, and using my fully extended tripod as a pole mount for my camera, the topography of the ground got in the way, all along the line, in varying degrees of obstruction. The one solid detail in the image, without a doubt, and agreed on by all, was the ruins of the Henry House, anchoring the right horizon line. The foreground fence, and seeming orchard, were problematic, as period maps of the battlefield certainly suggested it should be the Robinson fence, but at the time of my examination extremely tall grass obstructed the view,  causing confusion as to the foreground of the 1862 image, and compelling me to move forward to the next rise, approximately 140 yards further south. This location provided a much more realistic view of the ravine-like feature that runs through the middle ground of the 1862 image. There are only finite possibilities when dealing with this image when accounting for the angle with which we see the Henry House chimney, and the clearly defined topographic features of the ground beyond the ravine. One realization from my March 2018 return visit is that the cluster of trees seen in the left middle ground, are indeed very probable witness trees or their descendants. That is a happy realization, and one that correlates to another image take from the opposite direction in the 1880s for the Century Magazine's article series, Battles and Leaders. 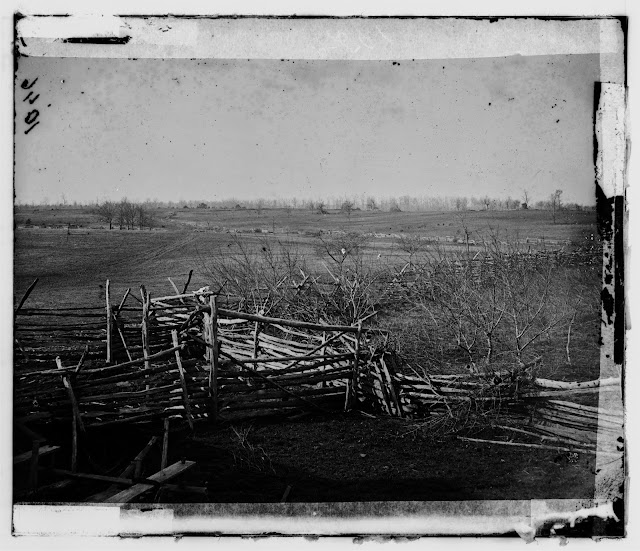 One side of the original stereographic negative, Library of Congress. 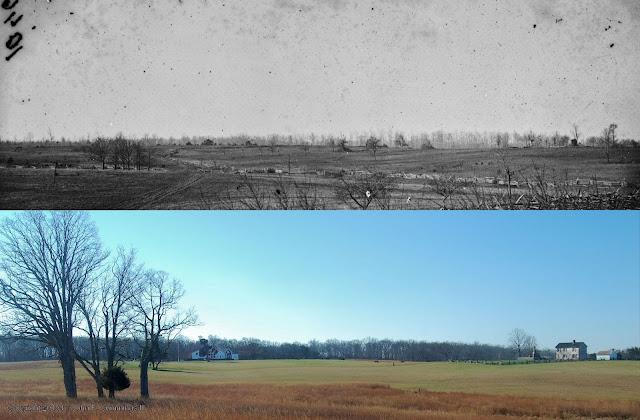 Then and Now comparison of the far side of the ravine. Extremely tall grass obstructs all of the foreground in the modern view. This modern view is taken roughly 140 yards further south than the 1862 camera position, however it does allow for vivid comparisons of the terrain features beyond the ravine. The following three details, both period and modern, are crops taken from a direct overlay of the two, resulting in remarkable matching. Zoom in detail of the Henry House ruins. Notice the topographic features still visible today, below.
Scaling was based on an 8 ft approximate height for the chimney base and toppled framing timbers. 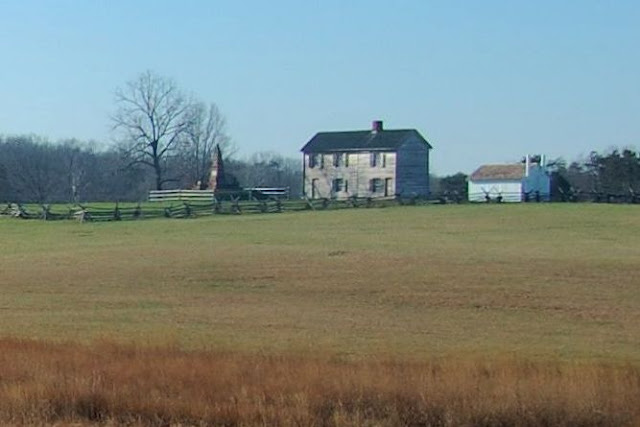 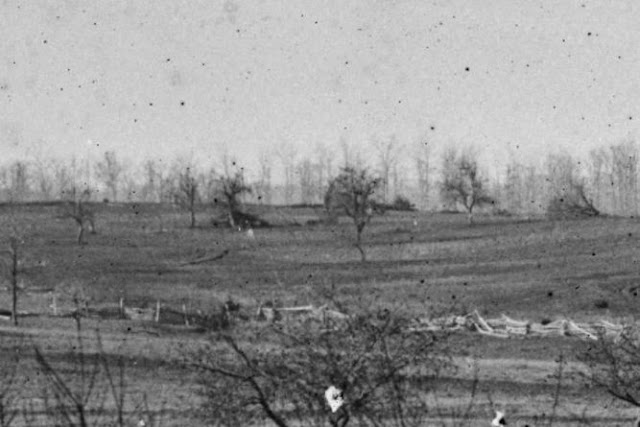 Zoom in detail of the ground occupied by Rickett's Battery. The topographic features remain, below. 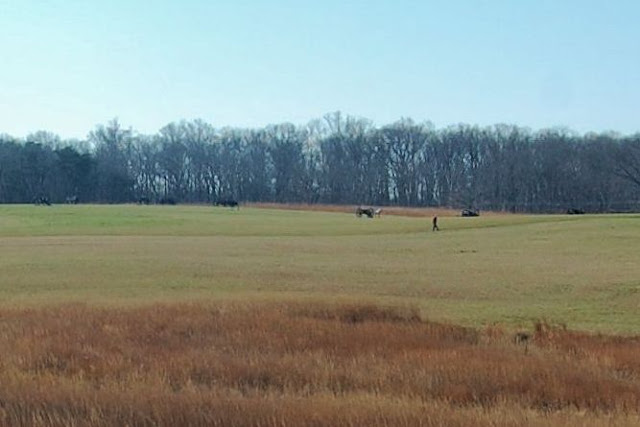 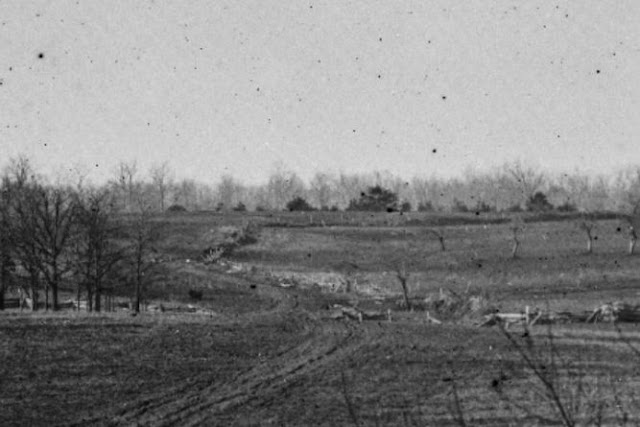 The Bartow marker location at left of center, along the documented fence running toward the modern Visitor Center, as seen below. Notice the small white objects in the period detail, near where the base of the original monument sits today, wedged between two small trees. These are in all likelihood the scattered pieces of the monument, (the largest possibly being the base itself) having been broken up not long before by Union soldiers, and documented by one who witnessed the incident, in a letter to a friend, and linked here:  On one part of the field I saw a monument erected by Beauregard to the memory of a rebel general. On it was the following inscription, “Boys, they have killed me, but don’t give up the fight.” At the time I saw it, it was standing & whole, but after a short time, I saw that it had been torn down & the boys were busily at work smashing it in pieces for mementoes. 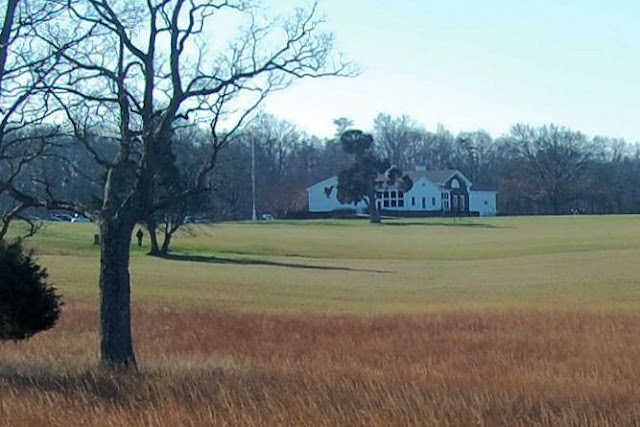 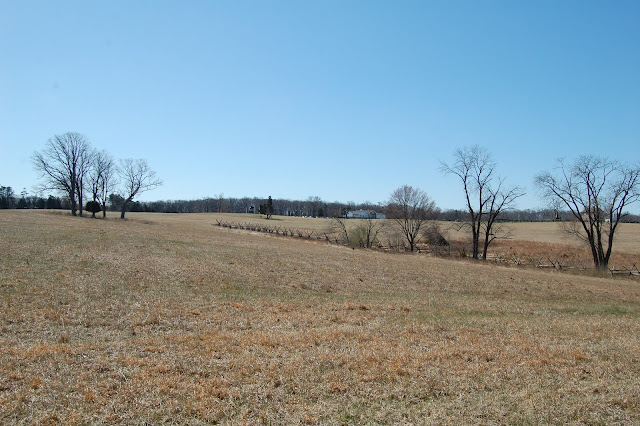 The CCWP/ Adelman suggested site, based on Knoke and Burgess, and revisited March 31, 2018, after tall grass had been removed. The topography does not work, as it is too far to the west along the Robinson fence line. It is uncertain why they chose this location for their 2015 Seminar stop. 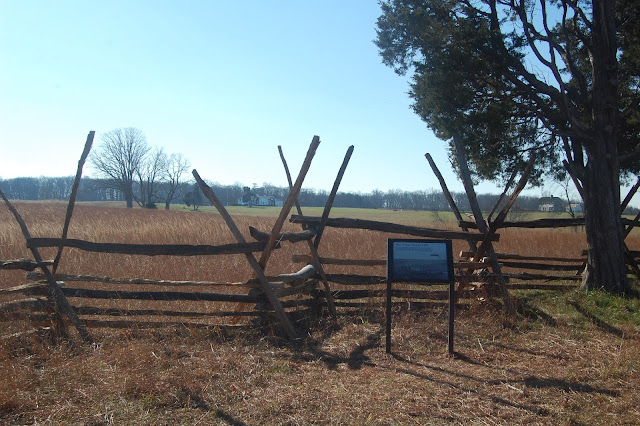 The new MNBP wayside marker, based on Knoke and Burgess. Slightly off, per Keith Knoke due to tree obstruction, but close enough for this purpose. 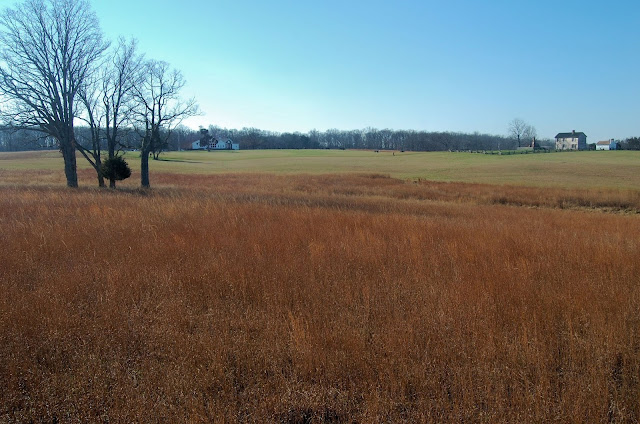 Full frame of my originally suggested camera location, December 2015, however the tall grass made the foreground perception difficult. Elevated camera height is approximately nine feet.
Grass in foreground, to beyond ravine, is extremely tall, more than five feet in some areas. 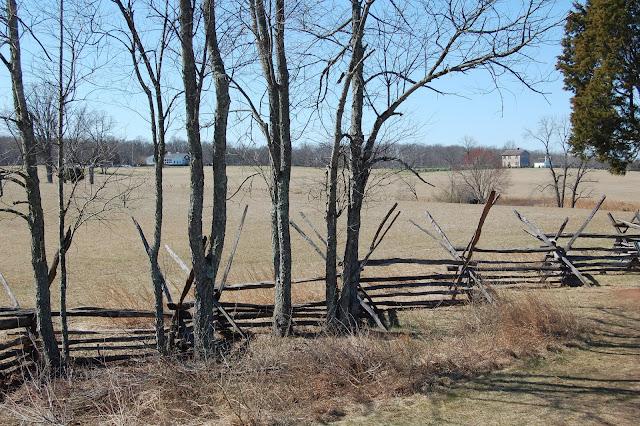 March 2018. My corrected view from near what would have been the 1862 camera position, roughly 140 yards further north than my initial efforts in December 2015, and slightly east of the NPS marker. Barnard and Gibson would have to have been on top of a Robinson Farm outbuilding to have achieved the middle ground details seen in their March 1862 view, as well as the downward angle perspective on the fence, an effect I attempted to achieve by raising my tripod above me. 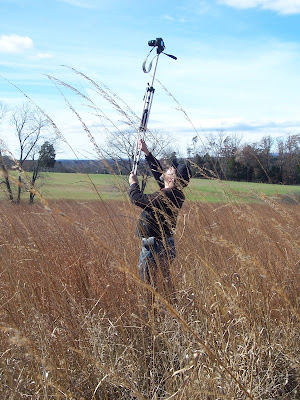 The author, working on the site, elevating camera, December 2015. Photo by James Anderson. 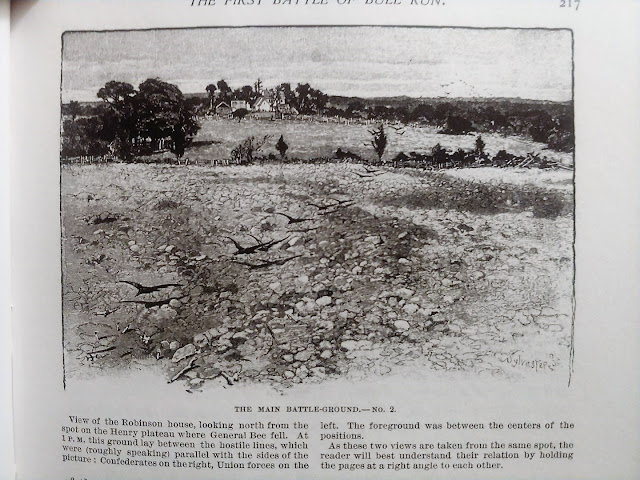 This engraving from Battles and Leaders, taken from an 1880s photograph, looks from the fields of the Henry Farm, looking northward, toward Robinson, seen in the middle distance. It is possible that the furthest left structure was utilized by Barnard and Gibson to get the elevation needed for their March 1862 view.
The cluster of trees seen at far left, above the ravine line, are the same trees seen in the middle left of  the Barnard and Gibson view, but here twenty some years after the battle.