Today is the 155th anniversary of the action known as Second Fredericksburg, fought along the Stone Wall. It is also the same day this image of the Confederate dead behind the wall was taken by Captain A. J. Russell, official photographer for the United States Military Railroad. 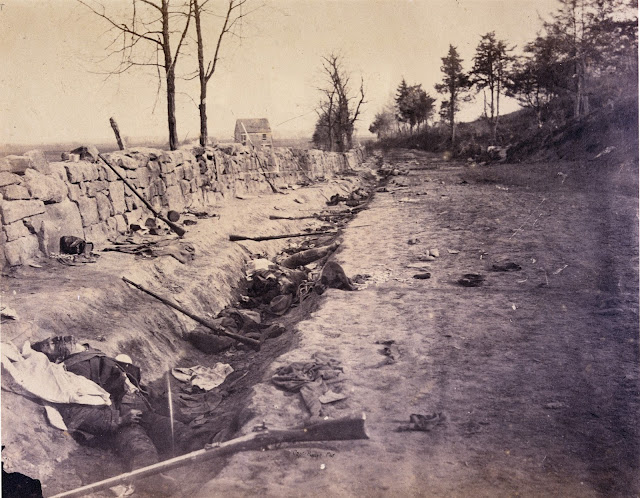 It is certainly an intriguing documentary image, and the only one known to have been taken of dead soldiers during the Chancellorsville Campaign. It would not be until three years later that skeletonized human remains were photographed on the former battlefields west of Fredericksburg, by the photographic entourage of Dr. Reed Brockway Bontecou.

The question has remained though, "How soon after the action was Russell able to take this image?"

Popular belief has stated that it was taken within 20 minutes of Sedgwick's men sweeping the surviving Mississippians from the ground, and pressing them toward the eventual engagement at Salem Church.

A hand written note, signed "H. H.", most certainly Herman Haupt, Russell's boss, per se, does indicate the ground behind the wall was held in Union hands for a couple hours. There is no doubt of that, but there are still no details of the timing for this and other images taken that day.

It is said that a telegraph message was sent to General Hooker at 10:50 AM, advising him of Sedgwick's success. If we go with the "20 minute" suggestion as to when Russell was in place exposing the glass negative, we can begin to examine 11:10 AM. For this, we need to adjust, in simplest form, our clock by an hour to account for the hour gained by Daylight Saving Time, thus, without other smaller adjustments that can be taken into account, we will use the addition of an hour. In the three days leading up to this anniversary, I began the process to determine the timing of Russell's iconic photo. This advance examination was done to bar the possibility of rain, or overcast skies preventing the following of the sun's path. This effects the timing by only minutes. My investigative photographs taken just this past April 30th, at 12:14 PM, an hour and four minute adjustment, reveals that the shadows present along the wall at that time make the 20 minute suggestion impossible. As you can see, the entire west face of the wall is in shadow. 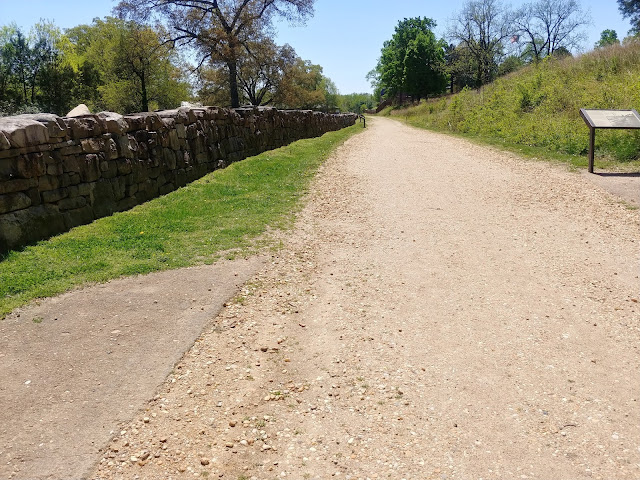 On May 1st, I produced the following photo at 1:16 PM, which again, for simplistic adjustment, would serve close enough to the appearance at 12:16, on May 1, 1863. I added pieces of dimensional lumber, cut to the exact length of an Enfield Rifled Musket, the predominant weapon seen strewn about in the original image, as markers to indicate scale and how shadows would be cast against the stones of the wall. The ground is brightly illuminated, and there is a lack of shadows on either side of the road. 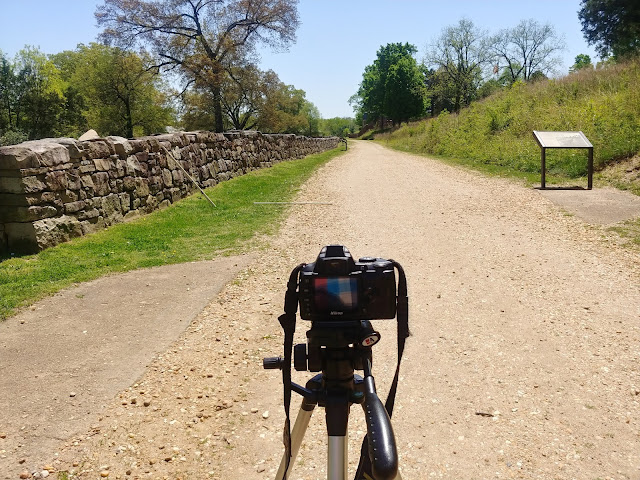 I waited till 1:36 PM to see how the shifting sun might change the shadow issue, as seen below. The shadows were not sufficient on the west, or right, side of the road, nor were the trees on the hill strongly illuminated on their west face. Additionally, the structures on the far end of the image, similar in position to the Hall house at left of center in the Russell view, remained in strong shadow. So, 12:36, in 1863 time, is still incorrect. This is now an hour and twenty minutes after the suggested exposure by Russell. 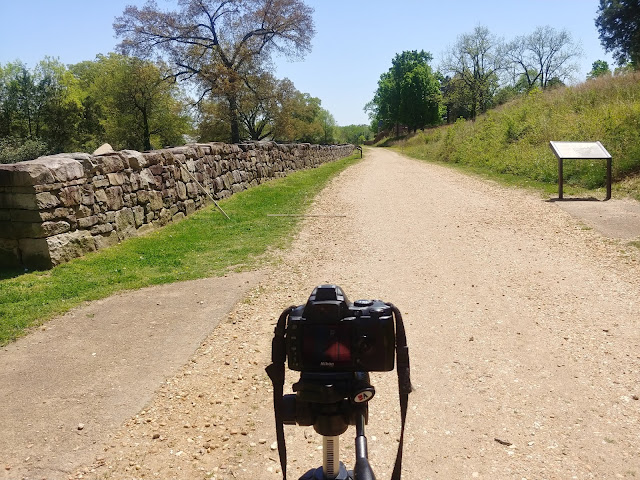 Returning yesterday, May 2, now one day ahead of the anniversary, I took the following image at 3:02 PM, yes, 2:02 1863 time, and found that the shadows were finally looking closer to the time required to replicate the original, making it 2:02 PM, Civil War time, three hours beyond popular belief. 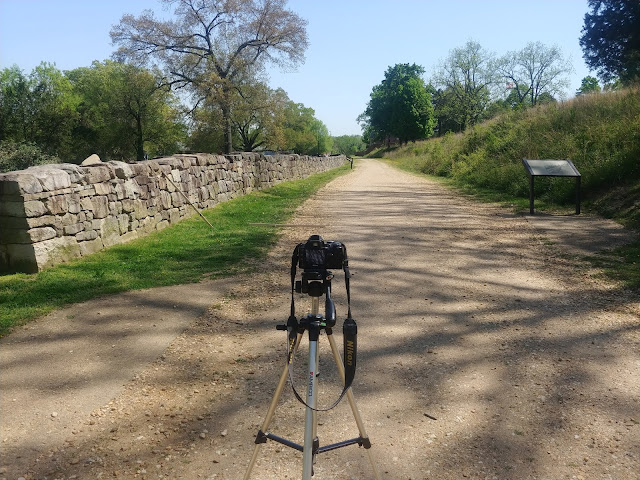 Shadows were beginning to build on the west side of the image with still sufficient strong light against the wall, and the ground in front of it. The east face of the trees on the hill are darkening, and if the height of the trees just out of view on the right margin were not as great as they are presently, the left foreground where the bodies are seen, would not have the dappled shadow, although some are present in the original as well. The shadow cast by my leaning "rifled musket", produces as near identical a shadow line as needed to place the Russell exposure around 2:00 PM on May 3, 1863, still about an hour and a half before Sedgwick's advance would come upon dismounted Confederate Cavalry near Salem Church. The day was far from over. 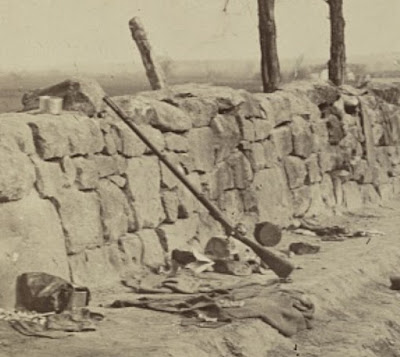 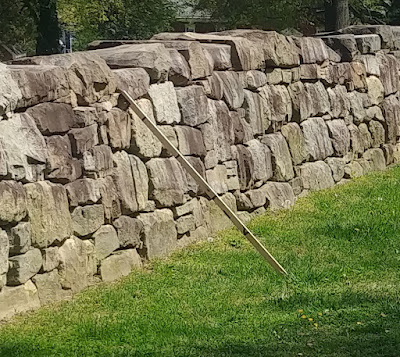 Make note: The current wall, built by the NPS contractors in 2004 is one course of stone taller then the one which stood here in 1863. This was done partly for stability, but chiefly as a "cover course" from the effects of weather directly to the top of the wall.

Within reason we can say we are near the correct time for this image. It may still be a little early, but I will be revisiting the site today so as to monitor the shadows as the sun sinks lower in the west. The shadow cast across the face of the stones by the rifled musket and its modern representation are well within acceptable proximity. 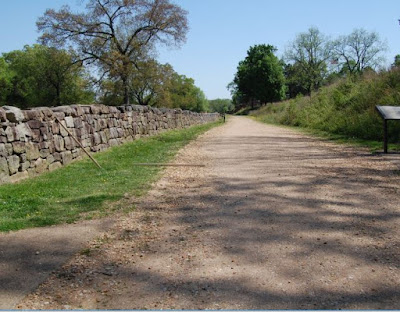 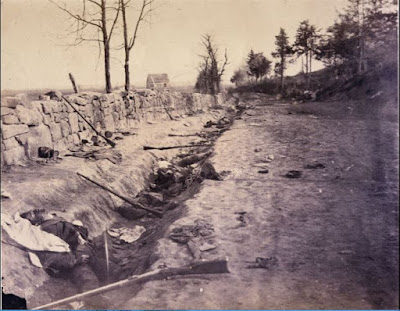