Is This The Widow Susan Alsop? A treasure from the attic.

When retired museum professional Terry Dougherty entered the attic of the Alrich house near Spotsylvania Courthouse, he knew he had stumbled upon a goldmine of Spotsylvania genealogical material. Last summer, Dougherty paid a visit to the house and Alrich descendant John Alrich-Altman. The majority of the home's contents had been sold off in an estate auction in June, but the attic had remained untouched and as it turned out, packed with an archive of historical images and memorabilia of the family. Many of the items are now on temporary loan to Spotsylvania County for a museum exhibit being prepared by Dougherty as a volunteer to the County. It is a Herculean effort, but one that Dougherty relishes. The display is scheduled to open in late May of this year in the Courthouse Village government office building.
Perhaps one of the most intriguing finds was a photograph with the inscription, "Sue Alsop, Old Aunt, a lovely Christian woman". Immediate speculation is that this is a photograph of the matron of the Alsop Farm of the May 19, 1864 battle fame. Susan M. Alsop was only twenty-one in December 1860 when her husband James Addison Alsop died from the effects of a carriage accident. Susan and her six month old son, John, continued to live on their Spotsylvania farm, witnessing the horrors of battle virtually on the threshold. Susan lived out her days there until she passed in 1915. This copy of the photograph may in fact have been made as a memorial keepsake for family members in 1915 as it is an enlargement of the 1860s period original, mounted on a "cabinet card stock", typically done after the turn of the century for such purposes. 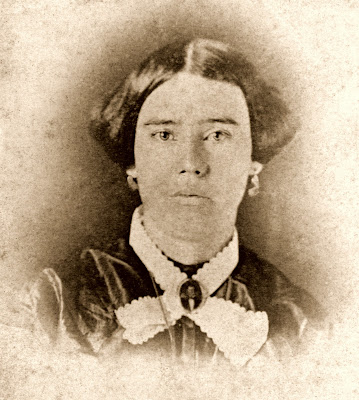 The image of "Sue Alsop", enhanced and restored from a
scan of the original by John F. Cummings.
The inscription on the back is shown below. 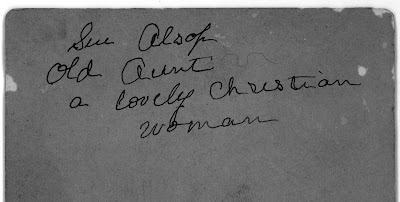 The interesting features of the photograph are the trappings of mourning etiquette that the woman is wearing, which taken by themselves are supportive of this being the "Widow Alsop". She is wearing a photo broach of her deceased husband, pinned to her collar, a tradition of Victorian era mourning practices. Considering that the collar is white, this indicates that the photograph would have been made after the end of "Full Mourning", which was to last for a year and one day. In full mourning the widow was required to wear all black for the entire period. After entering second stage mourning, a widow could add some color to her clothing, usual a white collar and cuffs. This being second stage mourning would indicate that it was taken no earlier than late December of 1861. Considering the distance to photographers in Fredericksburg from her Spotsylvania home, it is even likely that the photograph was made in early 1862 with the arrival of weather conditions more hospitable to travel on country roads.
It should be noted that the hairstyle this woman is wearing is typically that of the 1850s era, a style consisting of padded wings over the ears. If this is indeed THE Susan Alsop, widow of James Addison Alsop, one has to consider that she is wearing a hairstyle that would have been out of vogue by the early 1860s. This does not mean that she could not have opted to continue this style, but typically a young woman as she was then, approaching 23, would have been more inclined to keep up with fashion of the day.
Further scrutiny will be required of this and the hundreds of other images found in the Alrich attic. We are fortunate that they have survived to provide a window into the county's past. 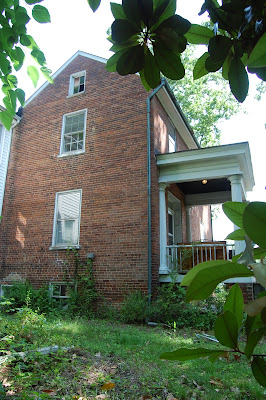 The south western exposure of the Alrich home,
(Dabney house during the Civil War), and the lone attic window.
Photographed June 5, 2010 by John F. Cummings.
Posted by John Cummings at 3:36 PM 6 comments:

Stafford Post of April 2: Technical issue with images is fixed.

For some reason, the images in yesterday's post on the Review Site in Stafford County were displaying square, thus they looked compressed. I have corrected the problem and they should be easier to look at on the blog page now. They are still clickable for enlarged viewing.
Thank you for visiting the Spotsylvania Civil War Blog.
Posted by John Cummings at 12:02 PM No comments:

A Look at Lincoln's April 8, 1863 Review of the Troops in Stafford County: By Request

In January and early February, NPS historian Noel Harrison made two in depth posts at Mysteries and Conundrums, the first here, and the later one here. Noel and I exchanged thoughts regarding the location of the sketch by newspaper artist Alfred Waud, seen below. Please read the articles over at Mysteries and Conundrums to get the whole gist of this discussion. In February, Noel graciously asked if I would post more details on my thought process of interpretation via the Spotsylvania Blog, so now, after many other distractions have been dealt with, I will now provide my thoughts on what I believe we are seeing in this image. First, I have to point out that I hold Alfred Waud in high regard as an artist and firmly stand by his abilities to  translate what he saw to paper, especially with regard to landscapes as will be the strongest part of my argument here.
At this point, to avoid repetition, I will simply use the images below to provide my premise. The first image is the original Waud sketch. Please click on any image presented here for larger viewing. 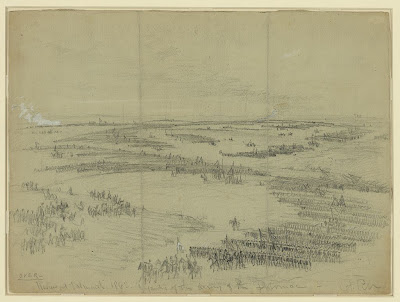 Waud's sketch had to have been drawn from an elevation such as a signal tower near headquarters. Waud was not in the habit of presenting  false, elevated views such as those Edwin Forbes was inclined to do in his work.
The sheer number of troops involved in this presentation would have required them to be formed by Divisions, in columns of Brigades. If they had been formed with an entire Division front, each front would have stretched about a mile in length based on mid war regimental strengths. A mile long line could not have moved in a graceful parade formation with any ease, as was described and praised in accounts of this review for the President. 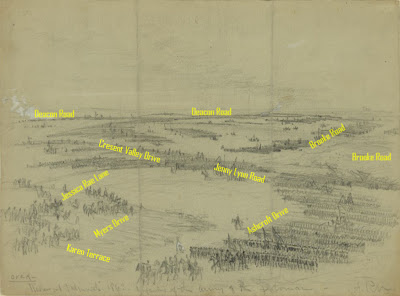 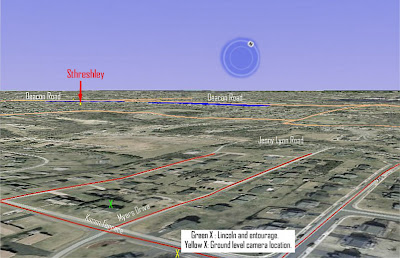 Satellite image indicating roads and landmarks relative to Waud sketch. The blue lines seen along Deacon Road demonstrate the Divisions formed by columns of Brigades. A newspaper account describes the area as having been cleared of most trees for the occasion as well as the bridging of water obstacles. This facilitated the fluid movement of the large masses of troops. The Review could not have been conducted in a smaller area than what is presented here. These observations are important toward the historical understanding of the site, otherwise lost within the residential development that has covered the once larger tracts.
Please do enlarge this one so that the annotations are legible. 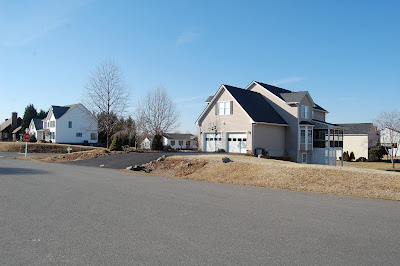 View across the modern neighborhood from the yellow X indicated above. 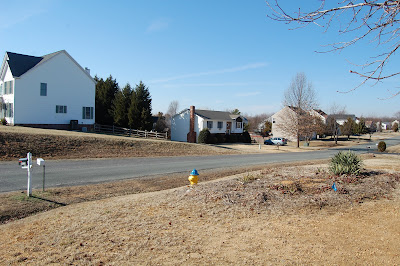 Closer view of hill at left from which the Lincoln entourage watched the
review, as indicated in the satellite image by the green X.