About 6:30 on Friday evening, July 16, a freak storm took a powerful smack at downtown Fredericksburg, leaving many busted and uprooted trees, downed power lines, and damaged property in its wake. Weather forecasts had not predicted the event, and many visitors to the City were caught up in the tempest while attending a music festival along the Rappahanock River. The storm was over in less than half an hour. One woman was taken to the hospital for "a gash on her head, and another person was hit by a tent and treated for cuts by EMTs at the scene", according to the local newspaper, The Free-Lance Star.
On the other side of the City, to the west, a large tree uprooted in the Confederate Cemetery, tearing into the grave of Private Benjamin M. Blackwell, and busting numerous headstones. Blackwell had served in the 48th Virginia Infantry before being killed on May 5, 1864 in the battle of the Wilderness at the age of twenty-eight. The 1860 census shows he was a farmer, living with a relative who was a blacksmith. In the same record, Benjamin Blackwell claimed a value of $50 in personal property, not a rich man by any standard.
An interesting, and revealing article referencing Blackwell, in the journal "Civil War History", can be viewed here. A letter Blackwell wrote to his brother in late 1863, demonstrates his unease at the course of the war, and the Confederate nation's fate.
In September 2003, Hurricane Isabel left similar damage in the National Cemetery on Marye's Heights, tearing open the graves of two Union soldiers interred there. 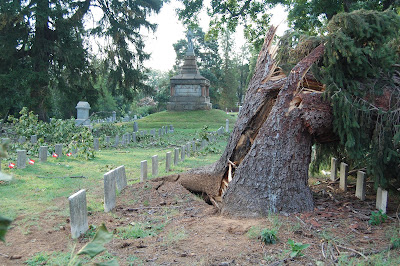 The grave of Private Blackwell is seen here, burst open by the large tree.
A monument to to the Confederate dead is seen at center distance. 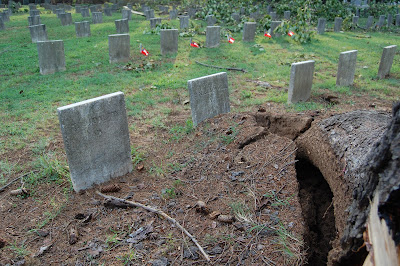 The ruptured grave is marked by a simple stone with the inscription,
B M Blackwell
VA 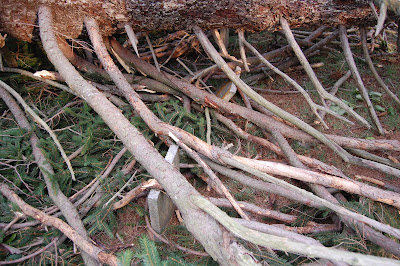 In amongst the branches of the fallen tree can be seen numerous other broken stones. 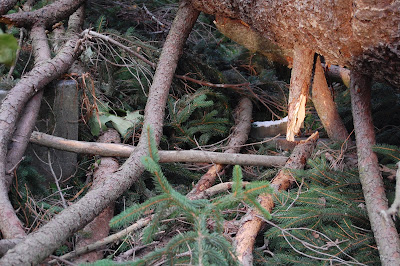 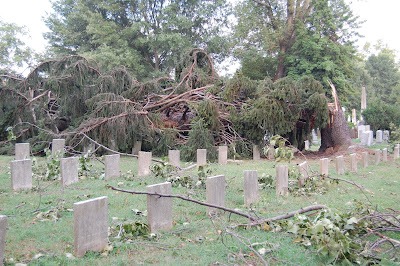 This view shows the overall size of the tree and the extent of the damage.
All photographs shown were taken approximately 24 hours after the storm, Saturday, July 17, 2010.
Copyright 2010, by John F. Cummings III
Images are clickable to allow for larger viewing.
Posted by John Cummings at 9:08 AM 2 comments:

In late November 1863, during the opening days of the Mine Run Campaign, newspaper special artist Alfred Waud sketched Union troops exploring the newly abandoned Confederate fortifications overlooking the Germanna crossing of the Rapidan River. The crossing at Germanna dates back to the colonial-era as a major transportation route, and also served heavily throughout the Civil War as a crossing point on the Rapidan for both armies in the campaigns of 1863-1864. In the Waud sketch below, looking north, the Germanna Highway (Modern Route 3), can be seen in the middle distance. The similar, present day image below that, is taken from approximately where the soldier is standing on top of the parapet of an artillery redoubt (quad 7-3). The quad graphing was added to the original sketch for the newspaper engravers that prepared the image for publication. Click on the images to enlarge. 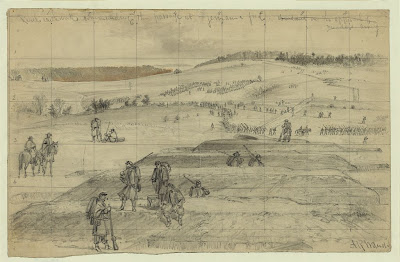 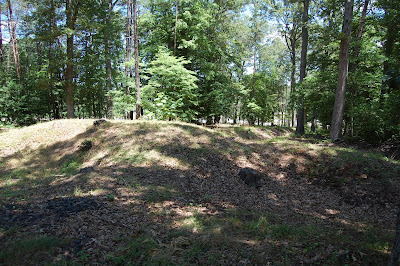 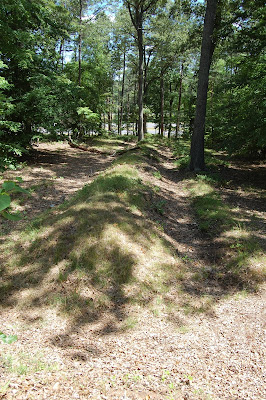 From atop the redoubt, looking downhill toward the highway. 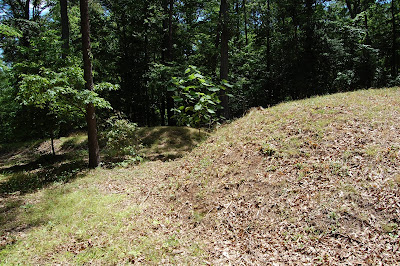 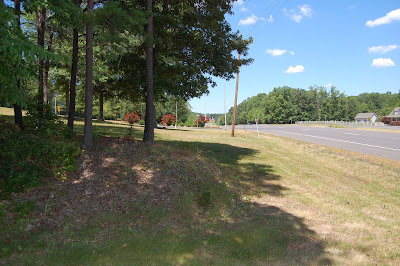 Looking northwest at about 300 degrees, along the south side of the Germanna Highway. The terminus of the long trench section stands in the shade at left foreground. The remains of these works are today on the campus of the Germanna Community College. Other remnants of earthworks can be found in the wooded area just north of the Germanna campus parking lot, but these are not as well maintained, and tend to get lost in the landscaping efforts around them. 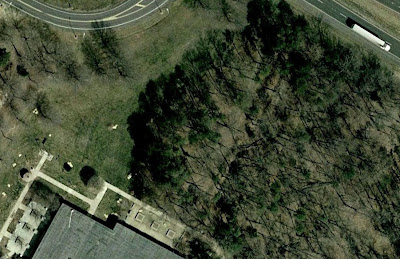 An aerial photograph shows the trenches running through the woods at center. A sidewalk runs up to the area, alongside the College building. 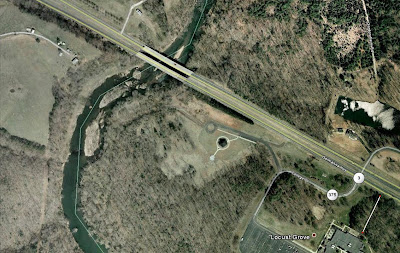 An overall view of the area with the works outlined at lower right, above the main building of the Germanna Community College. The Germanna Ford crossing site is now obscured by the modern, double span bridge near top left. The site of Alexander Spotswood's Germanna Colony, circa 1714, is located in the woods on the north side of the highway, at center. Although it is now in Orange County, this was the location of Spotswood's manor house (1722-1750). Spotsylvania County derives its names from the former colonial Governor. The University of Mary Washington Department of Historic Preservation maintains a website about the Germanna Colony here.
Posted by John Cummings at 4:48 PM 1 comment:

Future Eagle Scout, and bridge designer, David Mattes, reviews his plans before starting the crew on their next day of work, Thursday, July 1. The crew did a great job in getting everything stabilized before laying the planking down and installing the uprights for the handrail. Friday should be the final day on the project. 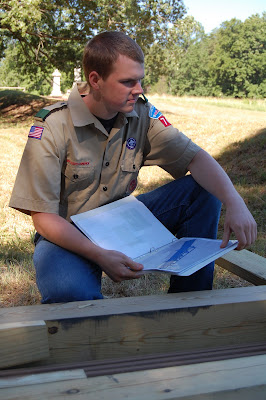 This 9:58 AM view at left, shows the results of the previous day's work.
The view at right, taken around 6:19 PM, shows the bridge now ready for the handrail. A fine job by the Scouts. 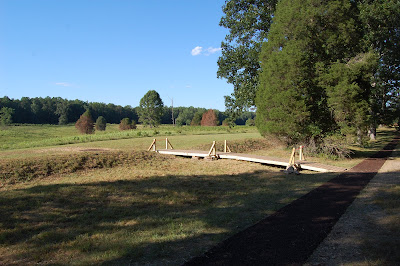 The nearly completed bridge sits in the evening sun, after the end of another volunteer day.
This view looks toward the north east and the Landram Ridge, from inside the Salient, at 6:23 PM.
Posted by John Cummings at 11:49 PM 1 comment: