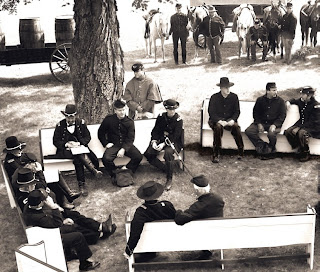 Terry took both glass negatives and tintypes with his period process camera. They will be posted at a later date.
Terry and I would like to thank all the fine re-enactors and members of the church for participating in this event which helped celebrate the 220th anniversary of the church congregation.
Please visit the Civil War Life Museum at this website: http://www.civilwarlife.org/ and when you are visiting the Fredericksburg area.
Posted by John Cummings at 6:27 PM 1 comment: 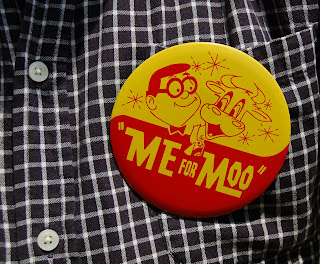 Remember that old ad line? It meant you could buy bread and milk at odd hours of the day. The babies would be nourished and wouldn't have to go to bed hungry. I remember when the Southland Corporation opened their first store in my area, just around the corner from our neighborhood in suburban Fairfax, Virginia. It was somewhere around 1968 or so, and the opening day my mother and I walked up the street for the first of what would be uncountable times to come. The clerk greeted us with toothy smile and handed me a big button with a cartoon store clerk and a dairy cow on it. "ME FOR MOO" was their slogan then. Remember, it was the all important milk at any hour. This was the novelty. Quite an experience for a seven year old, sucking down his first "Slurpee"!
What does all this have to do with Spotsylvania? Well... in a thinly veiled way... My wife and I were visiting our local place of purveyance last weekend, just inside the historic Spotsylvania Courthouse Area, and what was I buying for us? Coke Slurpees! As I was paying at the counter two bookish young men came in behind and asked the early twentyish clerk how to get to the Spotsylvania Battlefield. The clerk stammered and shrugged, and told them he was sorry but he had no idea! Now I know this young man is a local as he has worked behind that counter for better than a year but I guess he has never noticed the Park Service signs practically across the street from his employer. Hmmm... Well, as I turned to exit, two frosty 28 ounce cups in my hand, I caught the eye of one of the visiting fellows and directed them to follow me out the door. "Yes sir," he said politely, assured I held the secret to their quest. "Just take a left here, and go to the light. Take a right and follow the signs. You'll eventually see the monument where Sedgwick was killed." I felt comfortable they knew who Sedgwick was. "Thank you sir", they said and off they went. Interesting.
Posted by John Cummings at 2:26 PM No comments:

What we see daily... 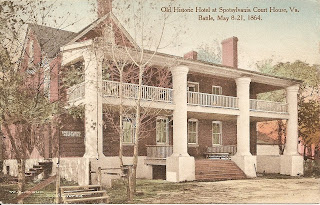 Here's a postcard dated August 27, 1918. The building is something that is seen in the course of many Spotsylvanians' day to day routine. It is the old hotel that was once owned by local big shot Joseph Sanford. The balcony/porch on the second floor did not exist at the time of the Civil War and has been removed since the latter part of the 20th century. Early screen actress and travel enthusiast Louise Closser Hale visited the area and stayed here in 1916. Part of her recollection goes like this:
"When we arrived at Spottsylvania it was suggested by the old inn keeper that he accompany us to the 'Bloody Angle' to tell us of the dreadful slaughter, but I was so distressed that the Illustrator (her husband Walter Hale) rescued me. We had come upon the old gentleman very agreeably. I was going around to the side door of his beautiful old hotel for I knew it had a history, and there is more history at the side door than the front---like the inside of people's lives. The old gentleman was inviting a solitary chick into the Summer kitchen for its evening meal. Now I come to think of it he was the third or fourth nice person I met who was looking after poultry---if poultry can be a single chick.
He admitted that it had been headquarters, 'his' headquarters while he planned the battle of this vicinity; he had slept in one of the great rooms above. I knew that he meant Lee, of course. The old gentleman wasn't running the hotel then. He was only sixteen and was carrying a musket at the Bloody Angle. He had stayed with his mother for a while but he couldn't endure it. They lived in the country that Sheridan raided, and after he swept past them the boy went into the army."

After additional regaling of the innkeeper's war experience, Hale described the old jail nearby. "Some negroes laughed in the little 'calaboose' opposite. An order was painted over the jail door: 'No talking with prisoners allowed under penalty of law.' Children passed in a farm wagon with jingling bells at the mules' heads. 'He's gassing about the war,' one of the girls said. They knew his weakness--or mine."

The above quotes came from Hale's book We Discover The Old Dominion, published by Dodd, Mead & Company of New York.
Posted by John Cummings at 9:40 AM No comments: 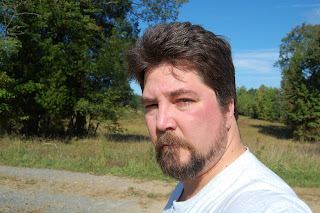 I have great plans for this blog, and anyone who knows me knows I have plenty of material. I am currently working on several projects that are taking most of my days, but I am developing a strategy that will perhaps allow me to force some early AM hours as devoted blog time. Discipline my friends. That's what it will take. With a little interaction, things should take off.
With that said, I welcome you to my Spotsylvania Civil War Blog. It shall be devoted pretty much to the subject for which it is titled, but once again, those who know me will attest to the fact that I can go off on tangents. Everything is relative.
I wasn't trying to look like Joe Mantegna in the picture here, it just happened.

Posted by John Cummings at 6:04 PM No comments: