The Spotsylvania County plantation house known as "Ellwood", was the site of an informative living history event on Sunday, September 26. The threat of rain kept some of the planned displays from attending unfortunately, but those that did set up provided a top notch presentation. Hosted by the Fredericksburg and Spotsylvania National Military Park and the Friends of Wilderness Battlefield, the theme for the day was "Taming the Wilderness: Featuring some of the key trades, skills, and crafts necessary to build a house and provide for a family on the Virginia frontier in the late 1700's." 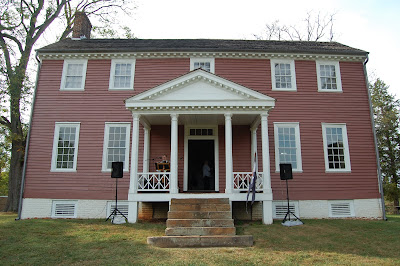 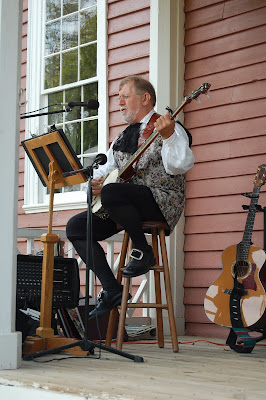 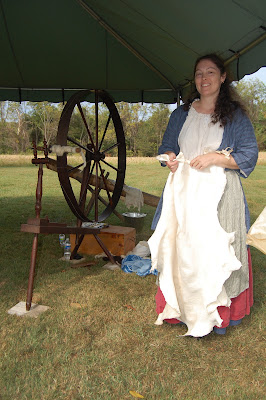 On the lawn, Melondy Phillips demonstrated the preparation of animal hides.
Here, she discusses the softening of deer skins. Very informative. 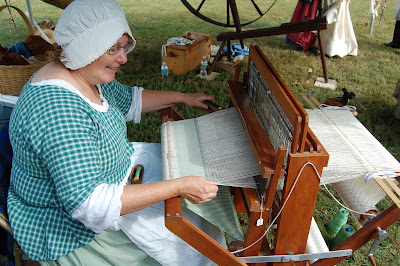 A member of the Fredericksburg Spinners and Weavers Guild
demonstrates a loom, using cotton threads to make kitchen towels. 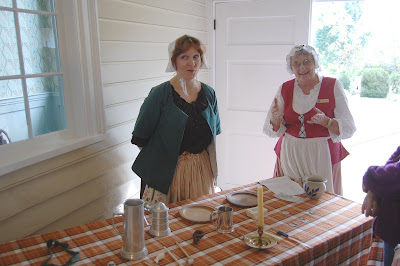 "Wenches" Elaine and Robin discuss the contributions of 18th Century Tavern
Life to our modern day language, with idioms such as "mind your P's and Q's",
"bottoms up!", and "he's not playing with a full deck." 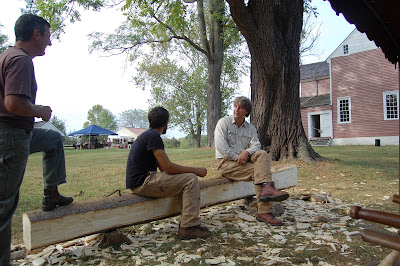 Craig Jacobs, owner of Salvagewrights Ltd., chats in the afternoon shade with
some of his friends who presented information on log hewing, architectural and
decorative details, and antique woodworking tools and their applications.
Here, they are sitting on a partially hand hewn beam, which that morning had
been a standing tree. They are masters at their craft.
Posted by John Cummings at 2:13 PM No comments:

The Rain.... a music video by a native Virginian, Scott Miller

Here's a song about the Battle of Spotsylvania. I happened upon this video just about an hour ago. Shortly thereafter I visited Scott Miller's website so I could see who this gentleman was. I was surprised to find that he is actually playing this evening, September 17, 2010, in Ashland, Virginia, just down the road a bit from Spotsylvania. From what I gather he currently lives in Tennessee and is presently on tour, making only two more stops in Virginia this time around.

It takes a minute and some eighteen seconds to get beyond the storm clouds and lightening, but for the rest of the video (and I can not tell if this is an official video released by the artist, or one assembled by a fan), but the remainder does have some footage of soldiers firing from a fixed position and then advancing into a dark and misty morning light. From the bio information I can find it appears Scott is a big fan of history, and a native Virginian from the town of Swoope, in the "breadbasket" of the former Confederacy. 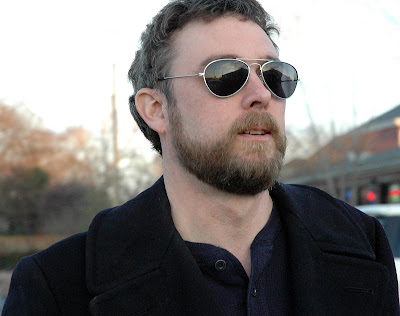 Singer/songwriter, Scott Miller
Posted by John Cummings at 7:48 AM 5 comments:

Seventy-one years ago, and seventy-five years after the conflict that raged over the landscape, the National Park Service treated visitors to extensive restorations of battlefield earthworks at the Spotsylvania unit of the F&SNMP.

The planning and construction of these sections has been recently detailed by NPS Historian, Eric Mink, in a three part series at the web blog "Mysteries and Conundrums". Readers can follow Eric’s presentation by clicking, here, for the first installment.

In the “then and now” slide show below, I reveal how the landscape has progressed over time. Most profoundly, the viewer will notice the disappearance of the hard surface road that had also been built in the 1930s. This view looks over the trench restoration, looking essentially south, toward the intersection of Bloody Angle Drive, Gordon Drive, and Burnside Drive. In the 1930s, Burnside Drive was called Grant Drive East. Bloody Angle Drive has been totally removed except for the grading over which it ran. The creation of a level base for the road to follow involved numerous, intrusive alterations that remain in place today, and can confuse the pedestrian experience. Unfortunately, it does not seem that detailed working plans of the 1930s road construction exist in archived files, otherwise a more thorough return of the 1864 terrain could be attempted.

The initial, black and white photograph seen here, was taken in April, 1939, for a collection of images to be displayed at the 1939-1940 World’s Fair in New York. It was part of the Commonwealth of Virginia exhibit in the Court of States.
Please click on the image, it will take you to a larger screen for greater detail viewing. When the "Picasa" window opens, click the "Full Screen" button at upper left to easily see a rolling slide show of the five images that make up the "then and now" transition.

The photograph below, taken around October of 1935, shows workers nearing the completion of the project. The view is looking roughly north from inside the salient. One has to speculate on the degree of arbitrary features built into this particular "restoration", despite documentation of a careful and studied process at other locations. A concerted effort was made to construct this in a deliberate perception of an 1866 photograph, although no hard evidence existed to substantiate the notion. A rendering of the 1866 photograph was later displayed in a weatherproof frame nearby, and undoubtedly led many visitors to believe they were witnessing a restoration of the genuine article. The 1939 photograph in the then and now study, shows visitors standing in front of the frame. Exactly when this restoration was dismantled is not clear, but its misleading features, without the log revetment, remain as a part of the present day visitor experience. 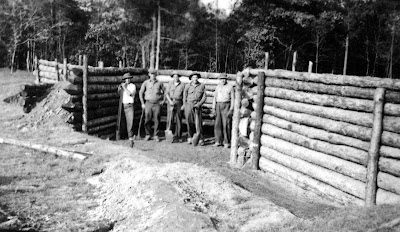 In the aerial photograph below, taken in October 2008, the red arrow points in the direction of the camera for the slide show image. This view also shows the pedestrian trail created by the removal of Bloody Angle Drive. 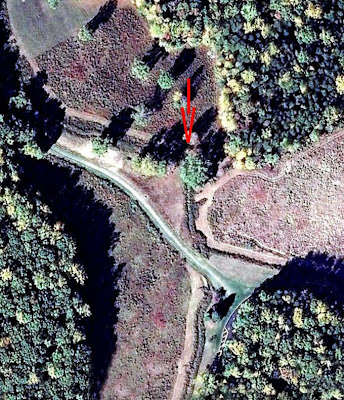 Beautiful weather made for a pleasant weekend at the Spotsylvania property of Dan and Debbie Spear, the proprietors of a unique bed and breakfast facility, offering rich historic charms as well as a soldier trodden landscape. Known now as “Stevenson Ridge”, a tribute to Union General Thomas Stevenson who was killed nearby on May 10, 1864, the 87-acres includes an extensive system of military entrenchments built by soldiers of the Union IX Corps, and later occupied by V Corps troops. National Park Service historians regard the trenches as some of the best preserved in private hands.
Dotting the landscape is a collection of 18th and 19th century structures that have been painstakingly moved from threatened sites and reassembled with expert craftsmanship. They are available for overnight accommodations and special events. Please visit their informative website by clicking here. 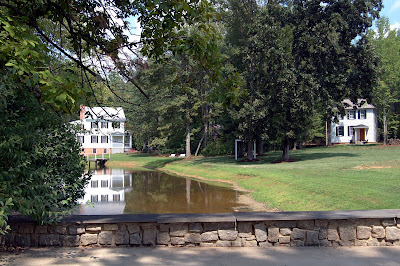 Two of the historic buildings brought here, the Riddick House at left and
the "Spy" House, are seen from a bridge spanning a stream fed pond
on the inviting pastoral landscape. 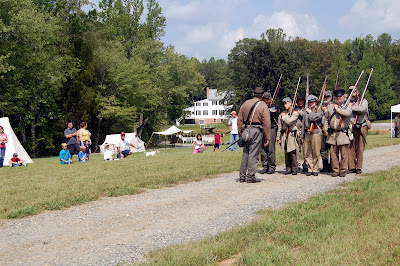 Members of the 13th Virginia Infantry, Company A, demonstrate Infantry
Drill for some of the Saturday visitors. Many Fredericksburg area residents
and numerous out-of-town travelers came by for the experience. 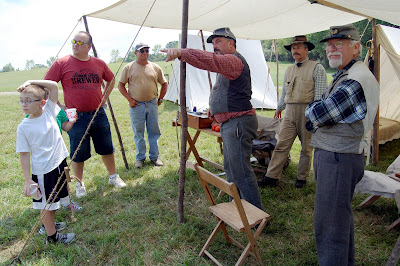 Colonel Troy Fallin, commander of the 3rd Regiment, Army of Northern Virginia,
is seen here with some of his staff members, providing background details to
enthusiastic visitors. Many parents brought their young children who displayed a
burgeoning interest in the history of the American Civil War. This young man was
seeking information on how to become a drummer boy with a reenactment unit. 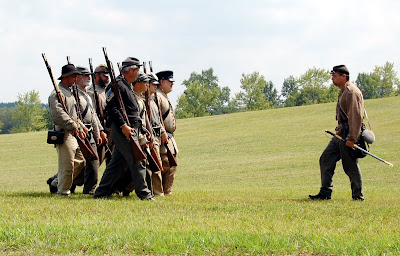 The well trained members of the 13th Virginia, Company A,
provided an impressive window into the past. 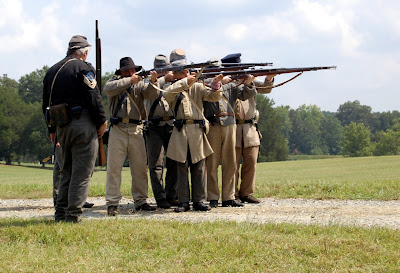 The grounds of Stevenson Ridge provides an ideal setting for quality
"living history" events. The site served as a foothold of the Union IX
Corps during the opening days of the Spotsylvania Campaign. 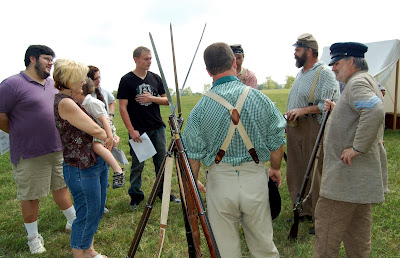 All weekend long, visitors learned what soldier life was like in the 1860s. 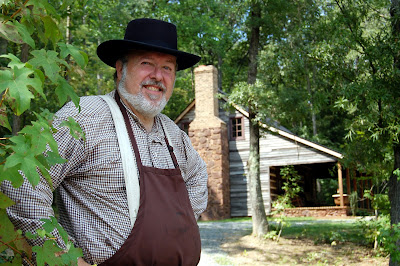 Terry Thomann, of the National Civil War Life Museum and Foundation,
http://www.civilwarlife.org/, came out to demonstrate the wet plate photo process that
was used at the time of the Civil War. The majority of battlefield images recorded
during the war were made as stereoviews, and were sold to a fascinated public. 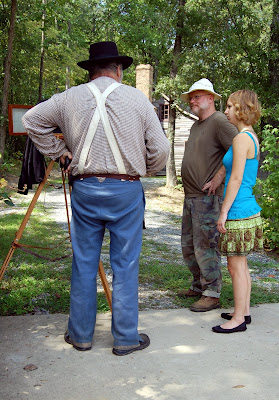 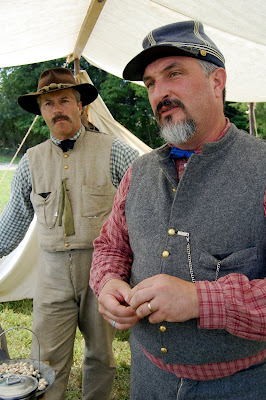 Colonel Fallin and his Adjutant, Captain T.J. Bartel.
Learn more about their organization by visiting
the 3rd Regiment, ANV, by clicking here.
Posted by John Cummings at 4:29 PM No comments: