After thirteen episodes on the website Gettysburg Daily, Garry Adelman and Tim Smith concluded their debunking of assorted theories as to the location of the series of images collectively now described as the "Harvest of Death", taken by the photographic team under Alexander Gardner's employ, specifically Timothy H. O'Sullivan and James F. Gibson. In the final episodes they focused attention on the work of Gettysburg National Park historian Scott Hartwig, and that of myself which was inspired by Hartwig's investigations, detailed on the Gettysburg Park's blog. My work has focused on the opinion that the home of Mrs. Thompson, otherwise known as "Lee's Headquarters", is visible in the upper right hand of O'Sullivan's exposures. This was advanced for the first time in my blog post dated January 12, 2012. My investigations have shown that the images were taken about 190 yards closer to the Chambersburg Road than Scott Hartwig had believed. Further considerations were made over time, also posted on this blog, and after several additional trips to the site, I have concluded what I can realistically produce with the evidence. It must be pointed out that Adelman and Smith focused on my initial investigations and, by the time of their May 10, 2012 posting of their on-site video journals, (filmed in February), they had stood on one that had been changed and corrected in posts during my then ongoing investigations. Furthermore, in Garry's Video #27, he suggests a wartime fence line, running roughly north to south from where he is standing, should have been visible, at least partially in the 1863 view. The only problem with Garry's suggestion is that the wartime fence he speaks of was actually one field further back from where he is. Other fences are a concern to Garry and Tim as well, including the one that would be running along the Chambersburg Road. Due to the issues with depth of field and sharpness of image, that fence, should it still be standing at the time of the images, even if just the posts, would be impossible to make out. Nothing in that background as small as single fence posts would be discernible. This brings to mind another complaint of theirs which is to point out that my theorized Thompson house appears to be too white to be the stone material it is built of. When viewed in the context of the "whiteout" effect of most of the background of this image, we know the trees along the distant ridge would be darker, but they are "bleached out", so to speak, just as the darker stone of the Thompson house is. And, still examining the Thompson house, my assertion that the broad surface of the white picket fence to the left of the structure is visible was challenged. All I can say, and with support of an image taken days later by Matthew Brady, the picket fence was still standing, and due to its broad surface area, would stand out clearly, a simple matter of contrast next to darker surfaces. This whiteout effect takes its toll on the image looking to the south as well. The Brady image of Mrs. Thompson's house is included further down in this post.
As of this posting I have determined, as best as the current condition of the ground allows one hundred and forty-nine years later, a comfortable approximate location for the series to have been taken, still within the confines of the field identified by Gardner as the one "where Reynolds fell", between McPherson's and Seminary ridges. Click any image to enlarge for better viewing. 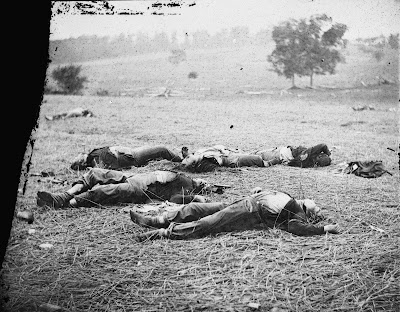 The O'Sullivan photograph, said to be taken on the first day's field. 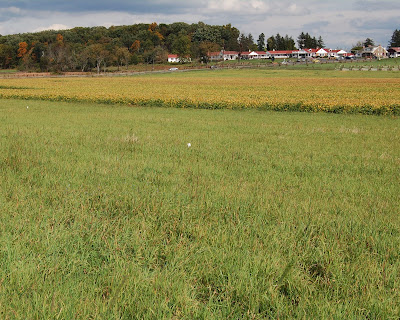 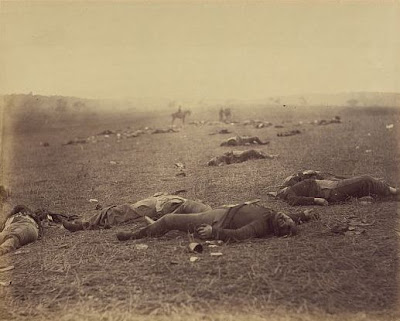 The companion image titled "Harvest of Death", showing the same bodies
as the previous image but from the opposite direction, nearly due south. 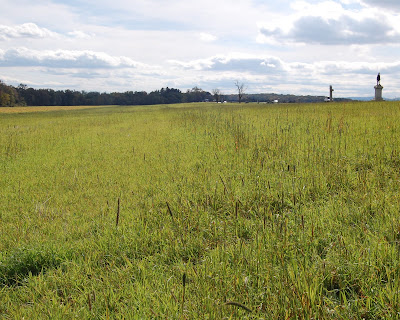 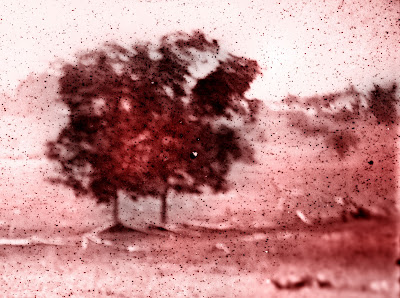 An enlarged and enhanced detail from the O'Sullivan image, of
the ridge rising toward Chambersburg Road and the Thompson
House at far right. Garry states this is "far from convincing." Really? 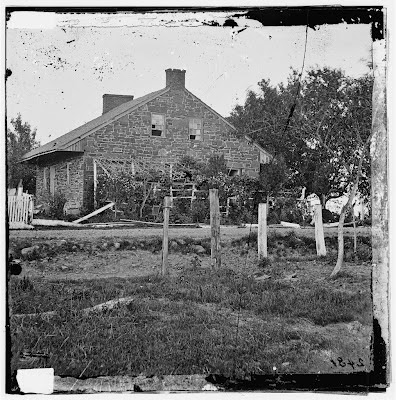 The Thompson House as photographed by Matthew Brady.
Note the large tree to the right and the white picket fence to
the left. Also, note the arbor at center is heavy with foliage.
The image below is annotated to point out these
features within the earlier O'Sullivan photograph. 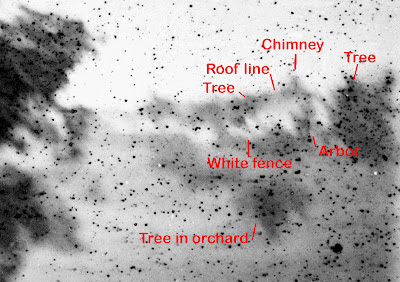 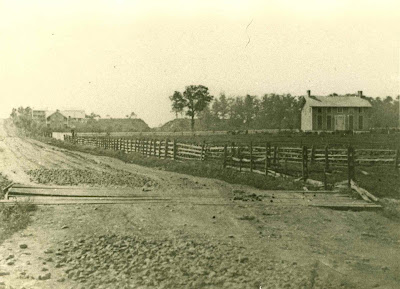 Above, the Tate, Sheads, and Dustman houses, are seen from right, closest to furthest
in this photograph by Frederick Gutekunst, taken from west of intersection with Springs
Avenue, looking up the Chambersburg Road, toward the railroad cut at left of
center. The Thompson house is obscured in the view by trees on the rise at
far left, along the north side of  the Chambersburg Road. Photo courtesy GNMP. 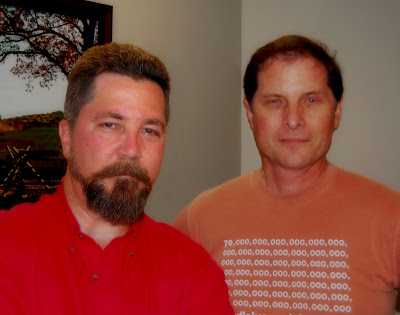 Your blog host, and National Park Service historian Scott Hartwig at right,
met to further discuss the series of images during the June 14th investigation. 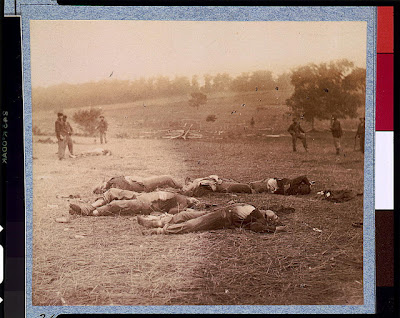 Enlarged area of Gibson image, where Confederate grave markers are visible.
They are the short, white strokes just above the fence remnant. They are even
more clearly discernible when viewed in the original stereo format.

Here, highlighted for clarity, are the positions of a portion of the grave markers.
See my post regarding a similar line of crudely marked graves at Chancellorsville,
by clicking here. 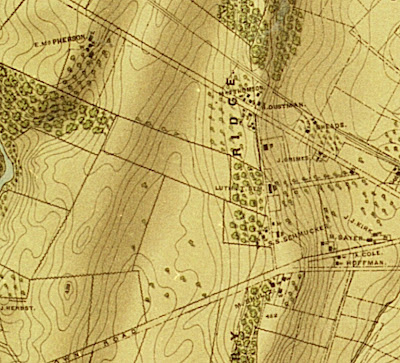 Here is a detail section of the 1874 Warren map showing the surrounding
area, including fences, trees, and orchards, based on 1863 information.

I will conclude here in stating that I consider both Garry and Tim my friends, as they say of me in their postings. This debate is not one of anger, it is differences of opinion and an exercise in learning. I anticipate their reply, and again extend a desire to sometime walk the ground in question with them, in greater depth. 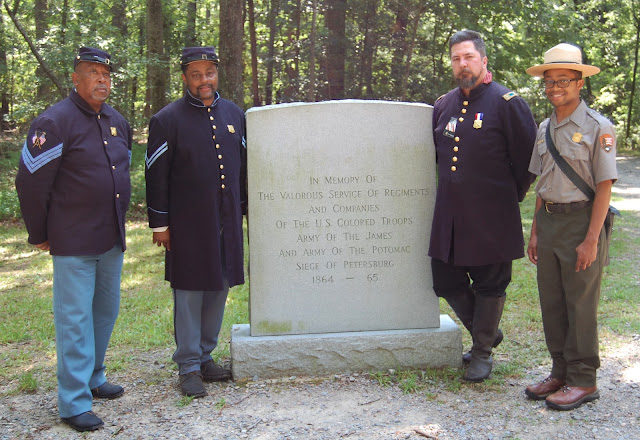 From left to right, members of the 23rd, Hashmel Turner, Steward Henderson, John Cummings, and historian Emmanuel Dabney at the U.S.C.T. Memorial near Battery Number 8. Confederate Battery 8 was captured by the 1st and 22nd Regiments of United States Colored Troops and renamed Fort Friend for the nearby Friend House, on June 15, 1864. 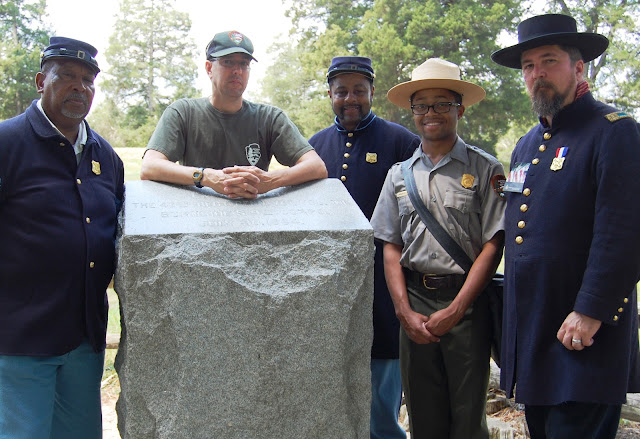 The tour visited the site of the Crater, which was exploded on July 30, 1864, and later attacked by members of the Union 9th Corps, including the 4th Division under General Edward Ferrero, which sustained heavy casualties. Left to right, Hashmel Turner, Chris Bryce, Steward Henderson, Emmanuel Dabney, and John Cummings, your blog host. 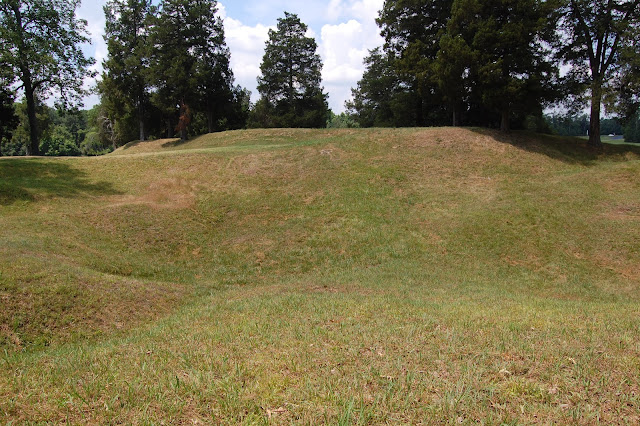 A view looking into the remains of The Crater, originally 170 feet long, 100 to 120 feet wide, and at least 30 feet deep. Casualties from both sides during the engagement here totaled 5,289, killed, wounded, missing and captured, nearly three quarters of which were suffered by the Union attackers. 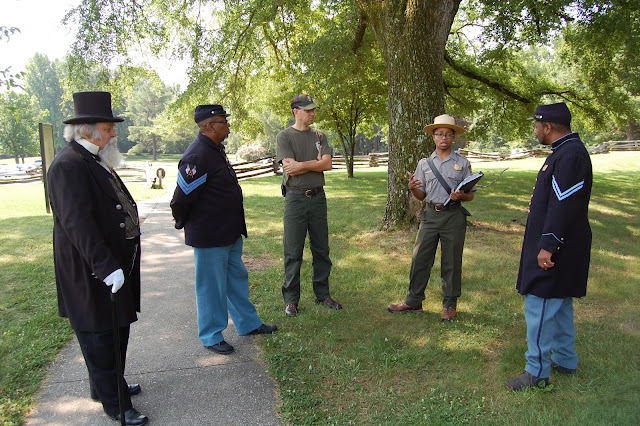 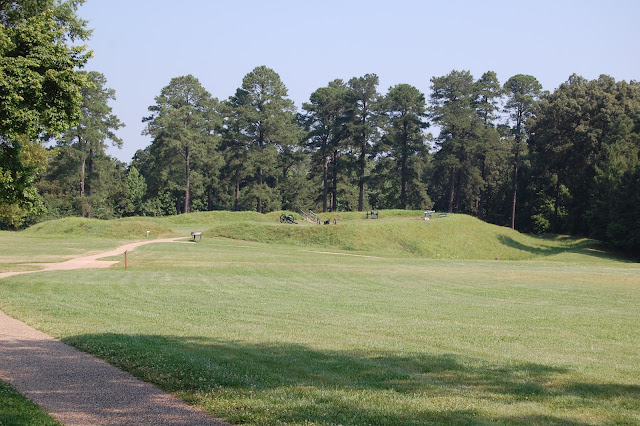 A view toward Confederate Battery Number 5.  It was the first to fall on June 15, 1864 during the opening engagement at Petersburg, along the Dimmock Line, the ten-mile Confederate defensive work around the city, built by slave labor in 1862 to protect the backdoor to Richmond. U.S.C.T.s played a significant role in its capture.
Posted by John Cummings at 5:03 PM No comments:

Recently, Ramona Martinez, our friend over at National Public Radio, visited the Spotsylvania area to discuss battlefield preservation, tourism, and the Civil War Sesquicentennial observances for a future, independent project. Readers of this blog will recall she had done an investigative piece on a soldier's photograph with initials carved in the stock of a rifle he held, an image from the Liljenquist Family Collection in the Library of Congress.  We met at Stevenson Ridge, to beat the early summer heat inside the "Spy House", one of seven, finely appointed, antique structures moved to the property by owners Dan and Debbie Spear. There, we talked for about an hour before she continued her investigation by heading over to Chatham Manor in Stafford County, to talk with historians of the National Park Service. 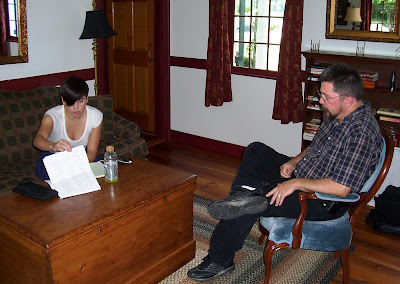 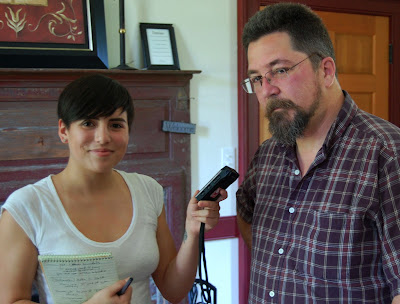 Posted by John Cummings at 2:50 PM No comments:


The Petersburg Campaign began on June 9, 1864, and would last nearly ten, destructive months. On April 2, 1865 Union forces broke through along the thinly defended Confederate works surrounding the city. Inside fallen Fort Mahone, photographer Thomas C. Roche documented the aftermath in a graphic series of images, offering grim testament to the human cost that war exacts. Some of those scenes are compiled in the video above by Dave of Shorpy.com. Created from high resolution scans of the original glass negatives in the Library of Congress collection, the video details the mud caked bodies of the fallen southern defenders, strewn across the landscape. Visible amongst the human wreckage are the numerous elements of war debris. Empty cartridge papers, frantically discarded in the heat of battle, carpet the ground in one close-up. A pile of coal, used by the fort's occupants for warmth in the cool evenings preceding the battle, is featured in another.