One hundred and forty-nine years ago yesterday, the town and surrounding landscape of Fredericksburg, Virginia was crowded with ﻿two massive armies. Over one hundred and eighty-five thousand men participated in a slug fest that left nearly two thousand dead and close to fourteen thousand wounded. Along with the human wreckage, the town itself had been severely damaged by an artillery exchange and resulting fires. Private residences and businesses were looted and ransacked by unrestrained factions of the Union Army. In the months leading up to the battle, Confederate forces had destroyed connecting bridges with Stafford County, across the Rappahanock River, as an impediment to anticipated Union occupation. 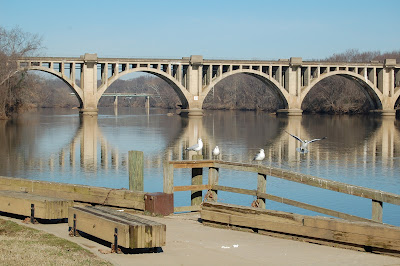 December 13, 2011: The view from City Dock where Union men massed prior
to funneling through the town streets, toward a severe defeat on an open plain beyond. 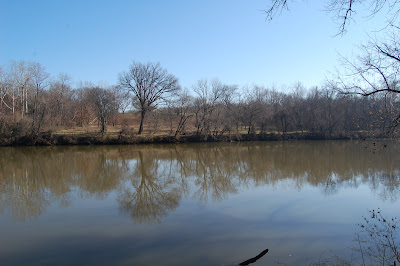 Looking toward the location of the middle of three pontoon bridge crossings
that streatched along four miles of the riverfront.
The boyhood home of George Washington, Ferry Farm, is on the opposite side. 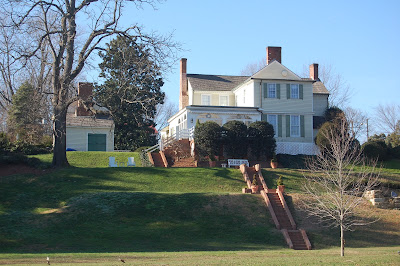 "The Sentry Box", built by Revolutionary War general George Weedon,
sustained extensive damage during the Union bombardment of December
11, 1862. It was repaired in the years following the war, and remains a
private residence and landmark within the historic district of today's city. 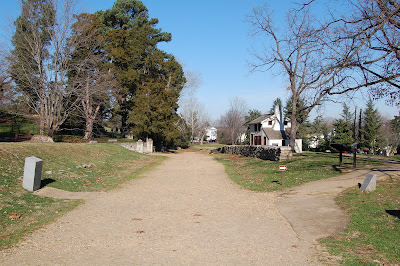 A little under a mile beyond the dock, across the former open plain, the
infamous stone wall and sunken road along the base of Marye's Heights
is a silent reminder of the horrific exchange between North and South.
Confederate defenders took shelter here and poured a decimating hail
of lead at approaching Union brigades who were time and time again
repulsed by the withering onslaught. 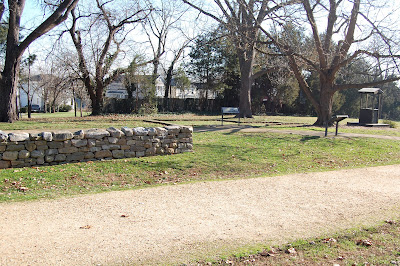 The site of the Martha Stephans house along the Sunken Road.
Legend holds that she remained in her home during the battle
so as to provide aid for wounded soldiers. 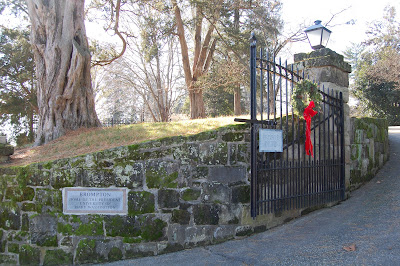 The moss covered, stately entrance gate to Brompton, the former
home of the Marye family, and the heights that bear their name. 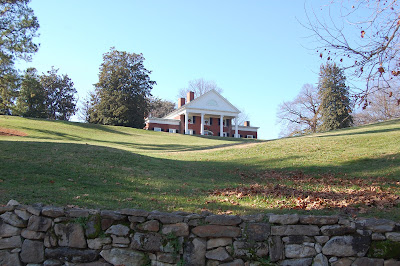 Brompton, now the residence of the president of the University of
Mary Washington, stands atop the heights where Confederate
hellfire once rained down on the approaching blue waves below. 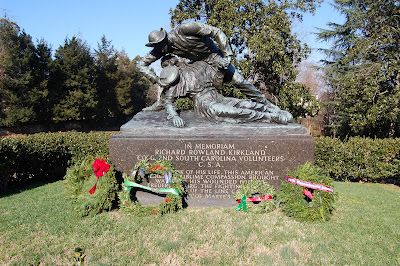 The monument to South Carolina soldier, Sgt. Richard R. Kirkland,
who, it is said, gave water the morning after the battle to the Union
wounded in front of the stone wall, earning the nickname, "The Angel
of Marye's Heights. A commemorative ceremony is held each year here. 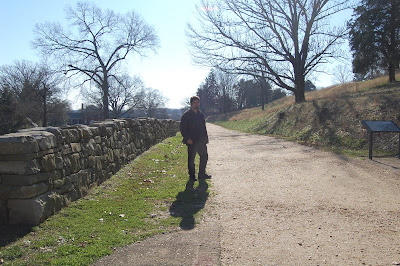 Your blog host casts a long shadow around 11:30 AM with the camera
looking south, along the road. At that time, one hundred and forty-nine
years before, the wall at left (rebuilt in 2004) was lined with thousand of
Confederate defenders who successfuly repulsed the Union attacks as
the day wore on.  Near this spot, Confederate general Thomas R. R. Cobb
was mortally wounded. A small monument marks the location where he fell.
Earlier posts on this blog provide further information regarding the Sunken Road:
http://spotsylvaniacw.blogspot.com/2010/04/sunken-road-and-captain-russells.html
and
http://spotsylvaniacw.blogspot.com/2010/05/sunken-road-and-captain-russells.html
Posted by John Cummings at 3:41 PM 1 comment:

Legomania 1993 Presents: The Battle of Fredericksburg

I post this with tongue-in-cheek. Nothing serious here folks. As simplistic as this little film is, I couldn't pass up the opportunity to post it as we are in the anniversary days of the December 1862 battle. I came across it on the Internet, and I have nothing more to say about it. It is what it is, in the tradition of stop-motion classics of the Christmas season, Rudolph and Frosty. Take a gander.

Update to Alrich and Alsop Family Connection: From An Anonymous Tip

An Anonymous comment to our post of May 31, 2011, added 12/4/2011, points out the widow Alsop's obituary in the Daily Star, December 6, 1915. That obit clearly states that she died "peacefully at the residence of Mr. S.R. Alrich". This may indeed be a clue as to the connection with the Alrich family. That clue had remained embarrassingly unobserved by your blog host until this anonymous tip. An immediate assumption would make this "Mrs. S. R. Alrich" to be Annie, the wife of Samuel Alrich, but his middle initial was "W" according to census records. Those fine details remain still uncertain, but there is now a good indication that Susan M. Alsop was at least a friend of the Alrich family, possibly considered an "Aunt", as many times older friends of a family are called "Aunt" or "Uncle" by children, even if there is no blood or marriage connection. We shall persevere.
Our post of Jun 23, 2011, found here, provides other details in this story.
Our first post regarding this image appeared April 5, 2011, and can be found here. 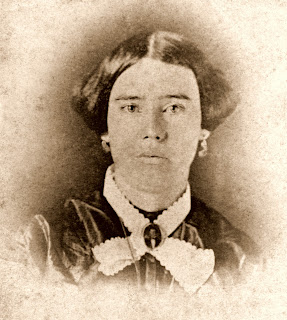 The image found in the attic of the Alrich home.
Collection of Spotsylvania County Museum.
Image restoration by John Cummings. 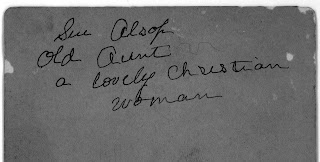 The inscription on the back of that image. 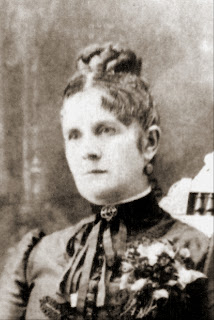 Susan M. Alsop in her later years.
Courtesy of Jerry Alsup.
Posted by John Cummings at 8:50 AM No comments: