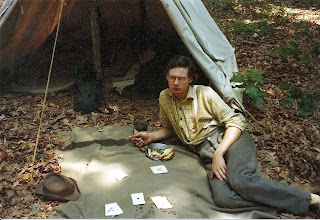 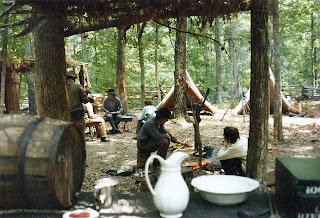 The above images were taken in July of 1975 while my family visited a living history presentation of the Fredericksburg and Spotsylvania National Military Park.
Situated in the woods near the Chancellorsville Visitor Center, the “camp” was designed to portray pickets of Company C of the 2nd North Carolina Infantry. The park sponsored this display for several years and it had been featured in an article in National Geographic Magazine’s November 1974 issue, Vol. 146, No. 5.
A sign at the head of the trail leading to this display explained that after the Confederate victory at Chancellorsville in May 1863, small detached picket posts like this were placed strategically across the vicinity to monitor Federal activity along the Rappahannock River.
My family arrived around lunchtime and watched the soldiers cook and consume their rations which included a recently “foraged” chicken.
Volunteers for these camps consisted of seasonal park employees, some of which ended up making a career with the National Park Service.
Demonstrations like this were inspirational to many kids like myself. I was fourteen at the time and would have enjoyed nothing better than to have been able to hang out in the camp all day and soak up the history.
I would enjoy hearing from former participants in these NPS sponsored camps at Chancellorsville.
Posted by John Cummings at 7:34 AM 4 comments:

Snow On The Field - Seventy-four Years Ago 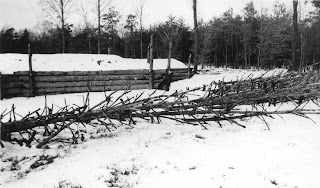 From the National Park files, here is a photograph dated February 1936, showing the exterior slope of a restored section of Confederate trench near present day Burnside Drive. Note the inclusion of slashings in front, and a heavy log revetment to the exterior wall. The park had built this section of restoration the previous summer. It is no longer maintained in a restored condition and has not been for quite some time.
It is interesting to note that on February 7, 1936, the Northern Virginia area received fourteen inches of snow which would caused a great deal of flooding in March, when rains and warmer temperatures attacking the snowpack further west in the Skyline Drive area.
The snow seen here does not look very deep since grass is poking through. As of this posting I have not found more detailed information on the Fredericksburg area snow accumulation that year.
Posted by John Cummings at 1:59 PM No comments: 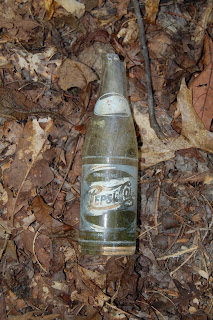 An "artifact" on the battlefield. Here lies a carelessly tossed 8 oz Pepsi bottle, near the Bloody Angle. In the early days of the battlefield park, visitors could drive a full circle around the "Mule Shoe" Salient and pull off on the south side of the road, across from the Union monuments and a now long gone "ranger shack".
Sometime in the late 1940's a visitor took pause to refresh his thirst and then pitched his empty soda bottle into the woods. The specimen happens to be what bottle collectors would call a "DD, ACL" which in layman speak means a double dot, applied color label. A "double dot" refers to the doubled dash or colon between the words Pepsi and Cola. The two color label (perhaps hard to distinguish in the photo) is considered a second style for the era, simply red and white, while blue had been included in its predecessor. Along the base of the bottle, just below the label, it indicates in white lettering the product had originated from the Richmond, Virginia plant.
It is interesting, I think, that somewhere around eighty-five years after the fierce engagement that was fought here, someone thought so little of the human sacrifices that once covered the grounds around them that they left their "modern" litter behind. Now, perhaps sixty plus years after that act of carelessness, that discarded "empty" had assumed a place as "artifact". The Pepsi bottle is not alone. A simple pedestrian survey will reveal a small assortment of beer cans and bottles. One hundred and forty-six years have come and gone since the days that the debris of war dominated the landscape.
Posted by John Cummings at 12:19 AM 1 comment:

One Out of Thirty Thousand By the opening campaign in the spring of 1864, twenty-one year old Benjamin A. Merrill was a veteran soldier and had reenlisted in one of Massachusetts’ four Veteran Infantry Regiments, the 59th. Merrill had previously served nine months with the 50th Massachusetts Infantry Regiment, but saw relatively little action while on assignment in Louisiana.
After a six month rest, Merrill’s reenlistment fated he would be more heavily engaged in combat. The eastern theater was heating up as spring blossomed in the Virginia Wilderness, and after less than two weeks since leaving Massachusetts, the 59th was fighting in the thick of it on May 6.
Attached to the 1st Brigade of the 1st Division of Burnside’s “Independent” IX Corps, the regiment reached the Spotsylvania Courthouse area on May 9th, but was initially not heavily engaged. Three days later, while the Army of the Potomac boldly attempted to penetrate and cripple the Confederate forces within the “Muleshoe Salient”, the IX Corps was tasked with a diversionary thrust at the Confederate right, north of the Courthouse Road.
Merrill did not emerge from that action on the 12th, and was reported killed, but the nature and region of his wound was not stated in the official army Certificate of Death. His body was either never recovered or he was buried as an unknown.
His photograph, from my private collection, was taken by the Lane studio in Haverhill, Massachusetts, seven miles northwest of Merrill’s hometown of Georgetown, both in Essex County. Sadly, the existing census and military records tell us very little of Benjamin A. Merrill’s life other than he was a shoe maker and had been living with his parents and siblings before entering the service. According to the Company Muster-in and Descriptive Roll, we learn that Benjamin stood five feet, eleven inches tall, had black eyes, dark hair and was of dark complexion. Even his photographer remains a mystery as of this writing. The photograph itself had been acquired, like so many others, from an internet auction, a small remnant of what was in all probability someone’s family album. Whether it was from Merrill’s immediate family or perhaps that of a friend, it bares his signature in period ink on the reverse. Annotated in pencil beneath the signature is the note, “Killed on battle field in Civil War”. Judging by the lack of a printed border around the pasted image, it could be surmised that this was taken in the summer of 1862 prior to Benjamin’s first term of service with the 50th Regiment, when he would have been around nineteen.
Posted by John Cummings at 1:25 PM No comments: