Seventy-five years ago at the Bloody Angle... Then and Now

In 1935, the F&SNMP was not yet a decade old, but work was being done to optimize the visitor experience. A road was under construction to bring vehicles around the entire inside of the Mule Shoe Salient, soon to be named Bloody Angle Drive. A large orientation sign had been placed near the Angle, the first of many that would, over time, be installed, removed, rewritten, replaced by something better, and then, repositioned numerous times, only to now be declared obsolete. The black and white photograph below, was taken in September of 1935. Interestingly, the camera position is directly in front of the McGowan's Brigade Monument, installed in May of 2009. The view looks roughly 33 degrees north east.
As you watch the slide show, notice the subtle changes. The roadway, not yet completed in the 1935 view, is in today's shot, totally removed in favor of the more intimate, pedestrian experience.
The trees in this slide show are interesting to take note of, particularly the three oaks that dominate the right hand side of the image. The left and center of the three are still with us today, now probably at or approaching their own centennial anniversary. They flank the path that takes visitors to the bridge crossing at the monuments. The third oak, at far right, has been gone for many years, having stood near the orientation compass at the top of the rise. Also profoundly changing over the years are the trees of the distant horizon line, and barely visible in the oldest image. Today, they create a wooded buffer, separating the Park from its new subdivision neighbor to the north. Other trees that were permitted to grow out in the swales, beyond the trench line, can be seen achieving their stature on the landscape. Currently, some of those trees have borne the extremes of conditions and  have succumb.
Soon, the wooden bridge across the Bloody Angle will be removed. Time marches on.

Please click on the image, it will take you to a larger screen for greater detail viewing.
When the "Picasa" window opens, click the "Full Screen" button at upper left to easily see a rolling slide show of the five images that make up the "then and now" transition.

The post-war business of John Henry Myer and Frederick Brulle, one block up William Street (aka Commerce Street) from the Myer residence and bakery at 212. The Germania Flour Mill was one of the highly successful businesses that helped Fredericksburg pull itself out of the financial wreckage wrought by the Civil War.
Myer himself is standing to the left of the center doorway, wearing a light colored suit and a derby hat. The viewer will note how the center doorway was later converted to a double width window. At one point, William Street was also lowered, which required the addition of two steps leading up into the doorway at right, whereas it used to be at street level.
The older image used for this slide show was taken in the late 1880s or early 1890s, after the mill converted from traditional stone grinding to a more productive roller system.
The actual mill structure stood on upper Caroline Street, across from what is today, Old Mill Park. It had stood in ruins since a fire gutted it in October of 1980, but it was totally leveled in late 2009, after many years of proposed adaptive reuse failed to take hold.
Please click on the image, it will take you to a larger screen for greater detail viewing.
When the "Picasa" window opens, click the "Full Screen" button at upper left to easily see a rolling slide show of the five images that make up the "then and now" transition.

Even If Etched In Stone...

Along the edge of the Wilderness Baptist Church cemetery, lie a cluster of graves belonging to the Todd family, a lineage dating back to the mid eighteenth century in Spotsylvania County. One of the stones marks the final resting place of Richard Lewis Todd, b. May 8, 1836, d. May 29, 1911. Sharing this marker is Charles Robert Todd, bearing the lines:
Killed By A Shell
October 7, 1865
At Rest
The inscribed date of death has led many visitors to speculate that Charles Robert Todd had perhaps been a civilian victim of an unexploded artillery shell, carelessly mishandled just six months after the war's end. Tragic incidents have been recorded that document such a fate. Often times children who would find "dud" projectiles, only to end up maimed or killed when a rock or hammer was applied by the hapless victim in an effort to break open their deadly find. Numerous incidents around Gettysburg are detailed by historian William A. Frassanito in his book Early Photography at Gettysburg.
The true fate of Charles Robert Todd however, is not as some have assumed, but no less tragic. The year of his death, as it is inscribed, is incorrect. The year was mistakenly entered as 1865, when the reality was 1864. The circumstances played out roughly seventy-seven miles south of Spotsylvania, near the Darbytown Road, south east of Richmond. On October 7, 1864, Private Todd of the Fredericksburg Artillery was killed during fighting  north of Fort Harrison. According to former NPS Chief Historian Robert K. Krick's The Fredericksburg Artillery, a Union artillery shell had struck the muzzle of the battery's No. 4 gun, killing Todd, and severely wounding four other members of the gun crew.
It is uncertain if Charles actually shares this grave with his younger brother Richard. His remains may in fact lie near the field of battle. Richard and another brother, Oscar, both served in the 9th Virginia Cavalry.
Due to contradictory birth years recorded in the only two census records where Charles is enumerated by name, it is uncertain of his age when killed. Based on the age given in the 1850 census, we can speculate he was born in 1832, given the entered age of 18. Ten years later, in the 1860 census, his age is given as 23, a five year variance during a ten year span.
The Todd's are known most famously in Spotsylvania for the tavern location on the Brock Road which carried their name. According to historian Noel Harrison's research, the Todd family had sold the property around 1845 to Flavius Josephus Ballard who then re-sold the property in 1869. The intersection where the tavern stood still maintains the name "Todd's Tavern". 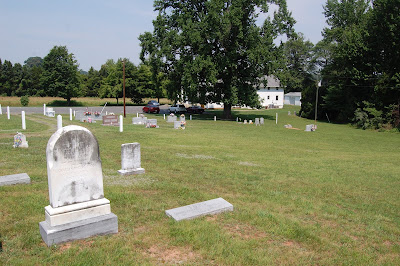 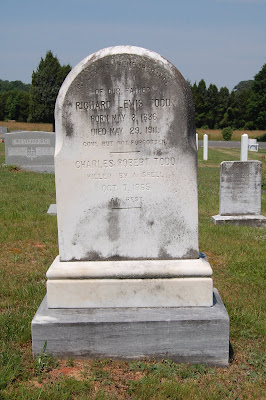 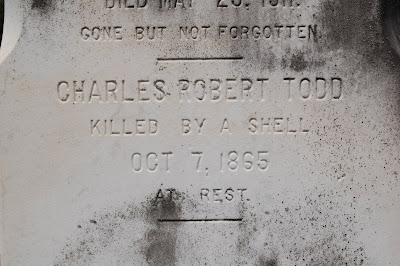 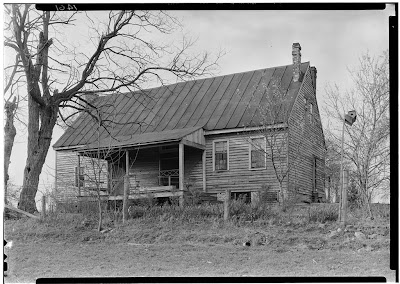 The former Todd residence, not the Tavern, as seen sometime after 1933,
in a Photograph made for the HABS HAER collections.
The house stood north of Catharpin Road, off of what is today,
Carriage Road. 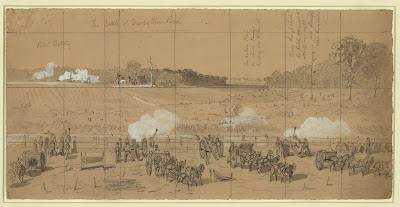 An on the spot drawing made by newspaper artist William Waud, showing the October 7, 1864 battle of Darbytown Road. The position of the Fredericksburg Artillery is in the left distance, accented by the
billows of smoke emitting from the guns.
The same image as it appeared in Harper's Weekly newspaper,
October 29, 1864 issue.
Posted by John Cummings at 8:51 PM 1 comment: