Gettysburg - Field Where Reynolds Fell - Stereoview Then and Now, and more...

I am now two weeks away from the fourth anniversary of my initial investigations into the location of Gettysburg's "Harvest of Death", and "Field Where Reynolds Fell" photo series. Over the four years I have made some early adjustments as to the camera position on the field, but have not wavered from the one key element of my work, that the Thompson House is sitting in the upper right horizon of the O'Sullivan view titled, "Gettysburg, Pa. Bodies of Federal soldiers, killed on July 1, near the McPherson woods". This has been fought tooth and nail by the Center for Civil War Photography's co-founder and vice-president, Garry Adelman. In late October this year, he showed a giant anaglyph of the "Federal dead on the right of the Federal lines, killed on July 1" variation, taken by James Gibson, while telling a walking tour he was conducting about the "importance of seeing these images in stereo" when attempting to find their location. Yes, yes indeed Garry, it is vital. Below, I provide stereo pairings from the original O'Sullivan negatives, and a modern stereo pair I made in September. I don't make anaglyphs so pull out your real viewers, such as those issued with the first two Bob Zeller books, or old CCWP seminars, and take a look. Click on the images to see them in larger format as well, especially if the right hand column of this blog interferes with your viewing from the home page. 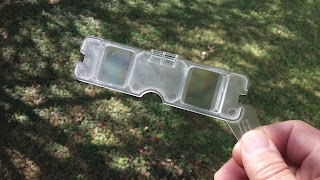 Get your viewers ready!

If you are new to all this hubbub, take time to review some of the more recent postings I have made here, especially the ones featuring videos with overlays. Please read my dissection of the actual Harvest of Death photograph companion image as well. In four years I have provided plenty of evidence that the location is found, yet the steadfast denials still spill forth. How many supposed coincidences of "similar ground" but not "the" place can be asserted before it gets ridiculous? All the logic in the world, and the topographic evidence, along with the ORIGINAL CAPTIONING for Pete's sake! Let's see where this goes!

Here is a little video to lay out the location of this series. Enjoy.