Our friends over at the Fredericksburg & Spotsylvania National Military Park have developed an excellent blog, Mysteries and Conundrums, which allows us an inside look at many of the discoveries and considerations they make while adminstering the battlefields in their charge. In the past few days, NPS Historian Eric Mink, has presented an in-depth examination of the process involved in the creation of the current Chancellorsville Visitor Center here. Planning had begun in earnest in the 1950s for the site, with the actual project being constructed in the early 1960s. One of the heaviest considerations during that planning was how and where to place the structure with the least amount of encroachment to the historic lanscape. Exacerbating the frustration was the then future plans to widen Route 3 through the battlefield, something that the Virginia Department of Transportation had already drawn up. It would not be until the 1970s, but the transformation of the historic Plank Road, into a divided, four lane highway, would take a great toll on the visual integrity of the landscape. The once rural area and its primary artery would be forever altered.


The following images present a look at the monuments placed near the north shoulder of the road right-of-way, since circa 1876. The monuments were placed to mark the vicinity of General "Stonewall" Jackson's mortal wounding on the evening of May 2, 1863. All images are clickable for larger viewing. 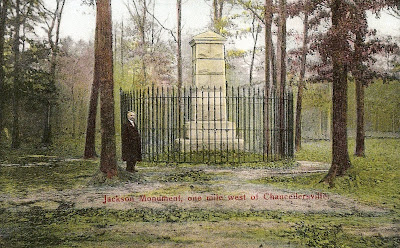 Looking north from the Plank Road in an early 1900s postcard.
This monument was dedicated June 13, 1888. 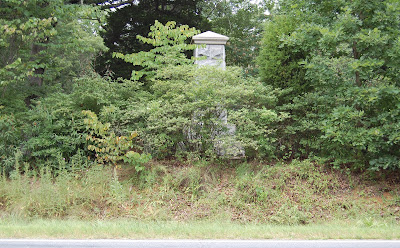 The same view today from the west bound lane of Route 3.
The VDOT right-of-way has cut a deep swath in front of the monument. 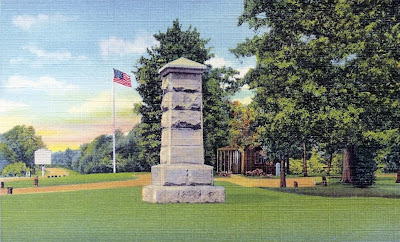 A "linen" postcard from circa 1940s -1950s, looking west at the
Jackson monument and Park Contact Station. 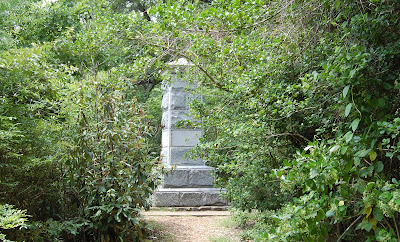 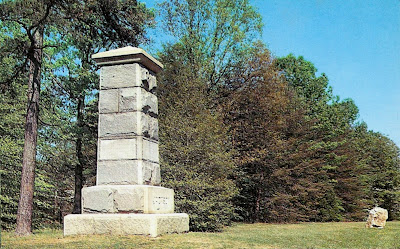 A circa 1950s - 1960s "chrome" postcard taken from the
north shoulder of Route 3, looking easterly. Note boulder at right. 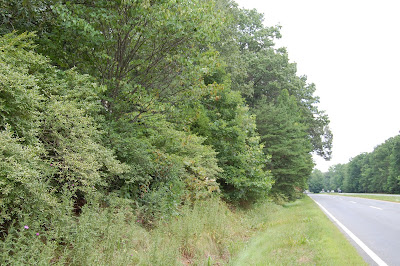 An approximately similar view today, with a look down Route 3.
An amazingly rare, quiet moment in traffic flow. 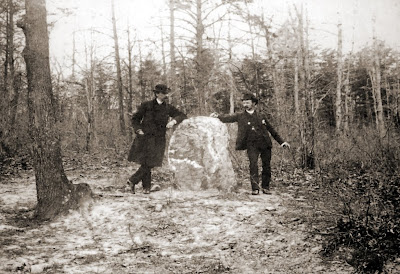 An early view of the first marker, placed September 22, 1879.
UPDATED: This date of dedication for the quartz marker was discovered
by NPS historian, John Hennessy, in October of 2012. 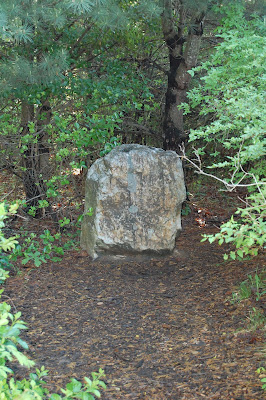 The same boulder today, much reduced in size by souvenir hunters, and
almost lost in the maze of trees and shrubs. An effort to access. 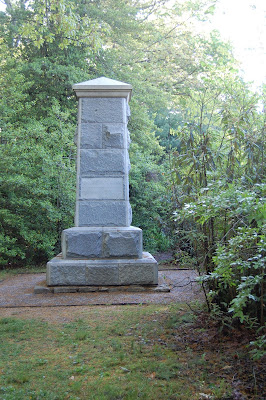 Both monuments today, looking east, from inside the NPS boundary.
The concealing growth at right serves as a guard rail of sorts to keep
visitors from tumbling down into the Route 3 right-of-way.
The boulder is beyond the 1888 monument, in amongst the foliage at center.

Remembrance and the Meaning of Life

When I established this blog, my purpose was to foment a discussion of all social, political and cultural aspects of the Civil War and how it effected, and still effects, the fabric of our local and national experience. Some of my initial posts in 2008 did just that, somewhat, but as time went on I became a bit more straightforward in my presentation of history, and less on the reflective bent.

Today is the 15th of May, pretty much smack dab in the middle of the month of remembrance. Locally, it is the anniversary month of three of the four major battles that raged over this region during an eighteen month period, December 1862 through May 1864. During that time, the soil of Spotsylvania County became a blood soaked landscape, literally. Within that span there were over one hundred thousand casualties, a true testament to the horrors of what men can do to each other when embracing the triad of “duty, honor, and country.” And that is, what it is. Our national sacrifices along these lines are remembered at the conclusion of this month, with the observance of Memorial Day. So in many respects, May is a very significant month in the collective experience of our nation. At the same time, for a good many people, the “Memorial Day weekend” is the precursor to “summer vacation”, and is spent in traveling to fun in the sun spots, and endless barbeques. The true solemnity of the intent is lost in revelry and laughter. This “Holiday” has become an embraced “extra day off” as well as an excuse to hold “SALES” at most any retail establishment. Again, that is what that is. The collective conscience seemingly deals with this lapse.

Personally, I find it disturbing that we, as a society, find it easy to “drop the ball” so to speak, on acknowledging the human toll, both in lives lost and in depredations across the board. Initially, it may be excused as the societal mind’s effort to steel itself against the “emotional plague of mankind” as Wilhelm Reich defined it. However, I believe it is more correctly interpreted as a movement toward a trend of “social engineering” where mankind represses so many “hurtful” things that ultimately the society weakens its resolve and slides toward emasculated culture. This is the destiny of an increasingly nihilistic society. Ultimately we sit on a precipice where historiography will fall victim to the historian’s fallacy, and apply a skewed interpretation of the past via the jaundiced eye of presentism.

That’s my take on it at least.

The stereo image at top was taken in April 1866, and depicts exposed remains of battle deaths on the Wilderness battlefield. When photographed, they had been lying there for nearly two years.
Posted by John Cummings at 10:11 AM 1 comment:

Shown below is a hand colored postcard mailed from Fredericksburg in October, 1906. This view was taken, looking approximately 338 degrees north west, from a position just below Captain A. J. Russell’s May 1863 camera position, as detailed in my April 27 posting. In the modern view of this location, the position of Russell’s camera is indicated by the red X. As a reminder, Russell's camera was facing south. 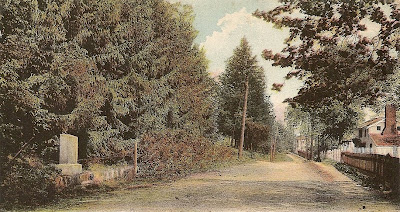 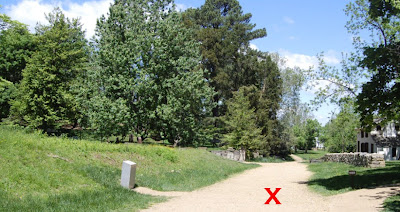 Alongside the road, at left, is a monument dedicated in 1888 to Confederate General Thomas Reade Rootes Cobb of Georgia. It was near this location that General Cobb was mortally wounded on December 13, 1862 by an exploding artillery shell. In the one hundred and four years since the postcard was mailed, the Cobb monument has been repositioned slightly and its base has been removed and perhaps lost all together. Initially it sat on top of a short retaining wall on the west side of the road. Portions of that wall are still visible today. It is also evident that when the postcard image was taken, the Stone Wall had already been dismantled in front of the Innis House at right, and the Stephens House, not visible. Tradition says that the artillery shell that wounded General Cobb passed through the Stephens House before exploding, sending an iron fragment into his thigh. The Stephens house burned down in 1913, seven years after this card was mailed. An image of the house, taken in April 1866, is seen below. It was one of the final four images taken by Dr. Bontecou’s entourage as described in my April 14 posting. 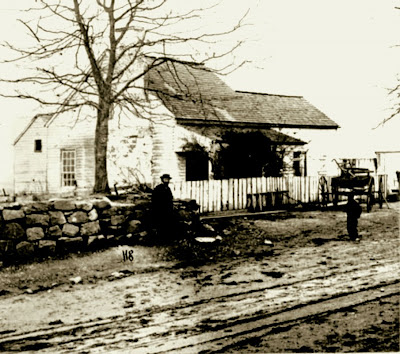 On the weekend of August 19-20, 2006, I presented a program sponsored by the Fredericksburg and Spotsylvania National Military Park, where I portrayed Captain Russell as he took his image in the Sunken Road. Unfortunately Robert Szabo was not available to join me for that program but he was kind enough to loan me one of his hand built, wet plate cameras. 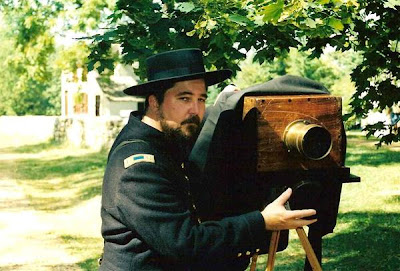 Here is your blog host, on location. The Innis House is in the background.

Posted by John Cummings at 5:09 PM No comments: