Play for a Kingdom - Hardly 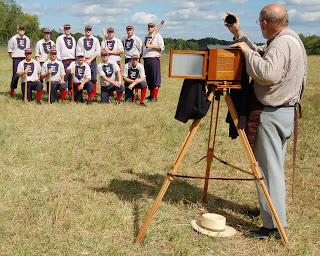 September 13, 2009 brought Old Rules (1864) Baseball to the Spotsylvania Courthouse area. Two deserving teams, the Maryland State Champion Elkton Eclipse vs. the newly formed Williamsburg Pastimes, met on the diamondless field as the closing event for Spotsylvania County's poorly promoted "1859-era County Fair". The overall event was the first in a proposed series of commemorative special programs to promote the observance of the Civil War Sesquicentennial through 2015.
Hopefully things will improve for future events but this sparsely attended premier left plenty to be desired. The ball clubs played valiantly, final score 22-2, with the champs still champs. The crowd generated by the well hidden final event of the Fair reached a shameful half dozen by the final pitch and this figure of course does not include those who came as friends of the teams or the ice cream vendor.
The absolute lack of banners, signage, anything, to indicate there was something interesting happening in the remote location, doomed the public attendance. But the real problem with the "Fair" was the complete nonchalance of the county organizer who assembled the participants, which included a medicine show, political debates and a concert/lecture pertaining to spiritual songs of field slaves. These elements which, properly promoted, would have carried the event, were left dangling in a sparse presentation amidst construction debris and earth moving apparatus. The donated use of the land was in itself commendable, but the scattered placement of the participants left those who did happen upon the "festivities" feeling like they were wandering the plains of Nazca.
Additionally, for this "1859" fair, there were some displays that made one forget what the whole thing was about, primarily the inclusion of antique fire engines (gasoline powered, yes) and a petting zoo of three alpacas. All "period" vendors were absent due to the lack of advance notice given by the organizer. Once again, (yes, a process with a history) the county staff failed to realize that events of this magnitude really do require at least a solid year of advance notice. It is obvious to the writer, that despite constant suggestions to the contrary, there prevails the belief that "re-enactors" and these "sutlers" along with period craftsmen and women, sit around by the phone just waiting to be called at a moments notice. No, they do not hit the road like a carnival.
But, bottom line, if you're going to put on an event, at least promote the thing. And for God's sake, put some sort of banner or signage at the entrance so the passing public has a clue that there is an event they are welcome to attend.

The attached image shows the winners of the baseball game posing for wet plate photographer Terry Thomann of the Civil War Life Foundation. Some of the best features of the "Fair" had been brought to the table by Mr. Thomann, a volunteer, who's knowledge and experience should have been heeded by County staff from the days of inception. It was not to be this time.
Acknowledgment should also be given to Debbie Aylor of the County Visitor Center, who has a genuine appreciation for and knowledge of her community's history. She is very capable, if allowed some latitude.
It is hoped that things will improve. Someone needs to get a clue.
Posted by John Cummings at 7:35 AM 1 comment: 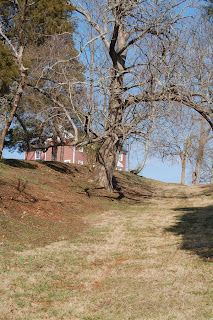 It has been a while, but I can now reveal that there is a dispute with Orange County as to the exact placement of the northern line dividing them and Spotsylvania County. As I have said previously, the long, well established history of Ellwood places it in Spotsylvania County, but Orange is not just concerned with Ellwood, they are looking at all properties along the disputed border.
Presently, Orange County has some other issues they are dealing with and this discussion with Spotsylvania is taking a backseat, for a while.
When they can refocus, we will be on top of it.
Posted by John Cummings at 6:52 PM No comments: 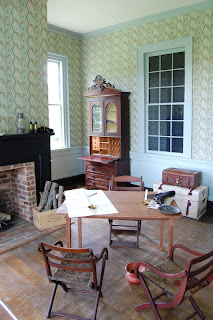 As I write this, I am waiting for official word from Spotsylvania County, but it appears that after 228 years of Ellwood being a cultural resource of the County, they, in their infinite wisdom have decided that this historic structure actually belongs to Orange County, just over the line upon which it sits. Two centuries of the people living within its walls paying taxes to Spotsylvania, every census taker since 1790 dutifully registering its occupants as residing in Spotsylvania County. Suddenly folks, its in Orange County because they really wanted it.
As I said in opening this post, I am waiting for official word that this is true, but from everything that has been communicated to me today it is a fact.
It makes no sense to me.
The photo I post here is of the newly restored headquarters room of General Warren, used during the Battle of the Wilderness. Ellwood is also famous for its cemetery that contains the arm of General Stonewall Jackson. Ellwood is maintained by the National Park Service and has been diligently restored by the efforts of the Friends of the Wilderness Battlefield.
Posted by John Cummings at 3:07 PM 2 comments: