This posting will certainly open a can of worms, I have no doubt, but I will present this with great confidence, for as you will see, there is substantial evidence to back it up.
Have you ever stood behind the Jackson monument on Henry Hill and wondered to yourself, "It took him an hour to arrange this line?" There is nothing spectacular about the ground we are led to believe contained his Virginians, lying prone behind the thirteen assorted pieces of artillery, yet here it has been marked, with one prior adjustment, and worshiped as sacrosanct.
The prior adjustment I mention dates to sometime in the late 1970s or early 80s, a date no one has given me firm confirmation of, but one that has been acknowledged. Prior to the adjustment, the cannons were lined up some 125 yards or so to the west of where they stand today, having been set close to the monuments to Jackson, Bee, and Bartow. But, eventually, this was reconsidered, and the National Park Service historians came to an epiphany, and moved them tighter to the "woodline", thought to be the one described by all accounts, where the farm lane emerges onto the open plain.
Much of this has been based on a mere trust of a poorly mapped accounting of what took place. Historians noted for their expertise of this battle readily admit that they are not certain of the placement of the woodlines during the battle, and published maps since July 1861 have been vague at best. Unfortunately, a map produced by a Wisconsin Lieutenant, Charles K. Dean, has received a great deal of traction, mostly after an article appeared in the March/April 2004 issue of Military Images magazine. The Dean map however, is far from reliable, being grossly distorted, and on a par with directions to a 7-11 scrawled on a napkin. It is indeed a wonderful artifact from someone who witnessed the fight and walked the ground again less than a year later, but it has no merits as a reliable, surveyed map. A feature marked by Dean as a "small water hole surrounded by rebel graves", has taken the spotlight since that article appeared, making claim that Dean's map puts it south of the Henry House. Indeed, that is the illusion given by this "map", but as will be explained in a later post, in greater detail, this, forgive the pun, holds no water. Some of my readers may have attended a photography tour I held on the field earlier in the year, hosted by Harry Smeltzer, and are well aware of my challenge to the article's assumption. Suffice to say, the Dean map is not reliable. Now, back to the immediate point at hand.
Below is an aerial map of the Manassas battlefield, focused on the Henry Hill area. Two foot contour lines have been placed over the ground, providing much greater detail than usually found on topo maps. This information is culled from the Prince William County website. Elevations are marked in white, but not necessary to understand the ground's undulations.
What I am about to present rests heavily on another period map, one in the collection of the Manassas National Battlefield Park. This map is the most accurate, and extremely reliable period map that exists of this battlefield. It is superior in its accuracy in the fact that it was actually surveyed, and not sketched or traced from other sources. It was produced for General P.G.T. Beauregard by his map maker, a trained engineer, Captain David Bullock Harris. Harris is most famously known as the designer of numerous Confederate defensive positions, including Centreville, Vicksburg, Charleston, and Petersburg. His map, a real map in every sense of the word, can be placed with amazing accuracy over the topographic map provided. As I gradually increase the opacity, the features Harris delineates begin to demonstrate a profoundly different, yet very logical placement of Jackson's line, one that merits the "hour" it is said to have taken in placement. Notice the arching of the troop position east of the Henry House, and note the contours of the plateau it fringes. Here is a military position that takes advantage of the ground features and makes far more sense. You will see that the treelines shown on the Harris map are considerably different from what is presented by the NPS on the ground today. This can not be ignored, and clearly makes written accounts all the more visually clear. The period treelines have been encroached upon since the establishment of the Battlefield Park, again due to poor understanding of the ground and the lack of published maps with any accuracy. Scroll through the five increases in opacity below. Jackson's artillery placement was some 200 yards further east than marked by the NPS currently. The small plateau where Jackson positioned his guns is now inside trees, and the slope behind, where the Virginians lay prone, has become the Park's maintenance path and  part of the recreational equestrian trail. Note the accurate positioning of the Federal guns near the Henry House as well. This is an important map.
Walking the ground with these insights is eyeopening. 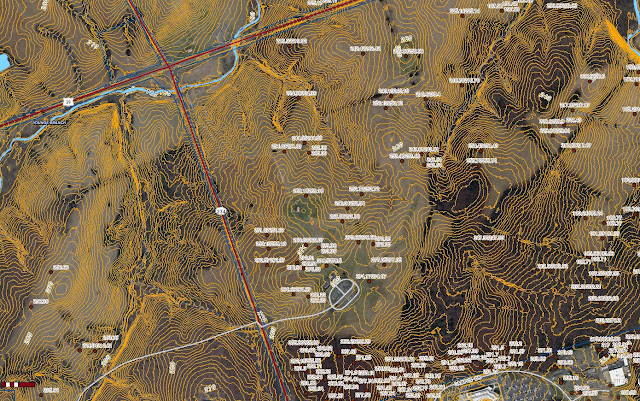 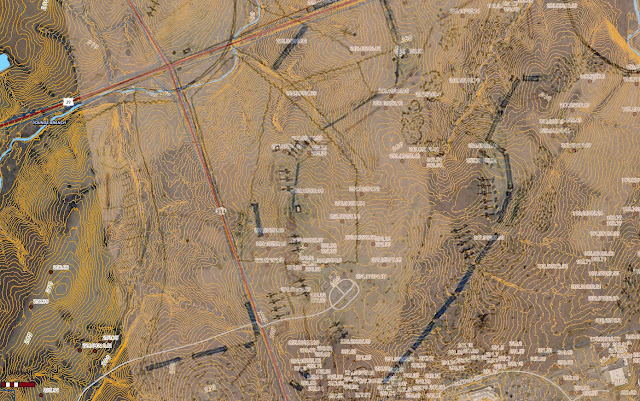 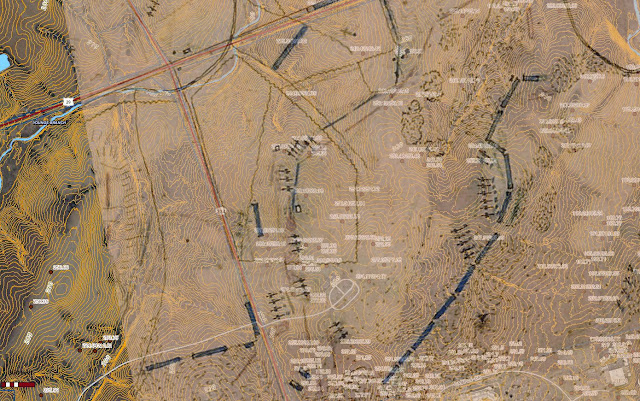 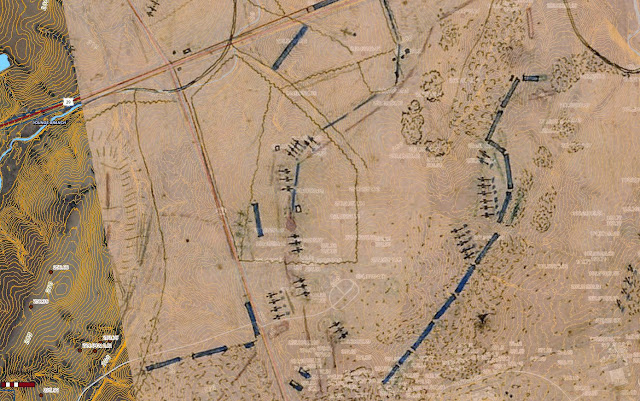 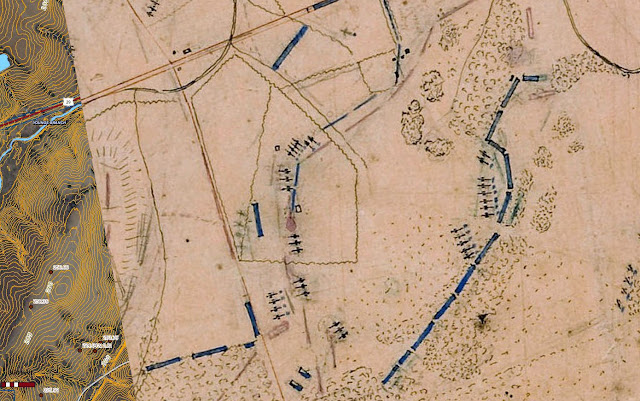 Here is the 1937 aerial map of the Henry Hill area, before the Park's establishment.
Note the treelines in 1937 are more representative of those in 1861. 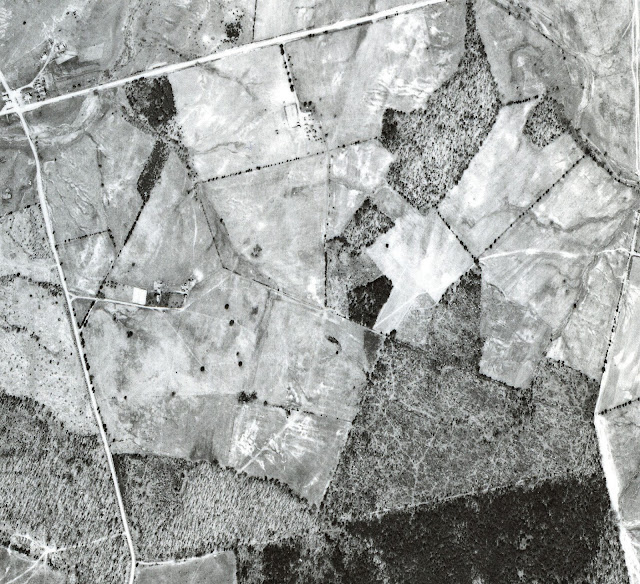 This is the Harris map, with enhanced contrast for better detail. Notice the gap between the middle and south gun positions where the farm lane exited the scrub growth near center. 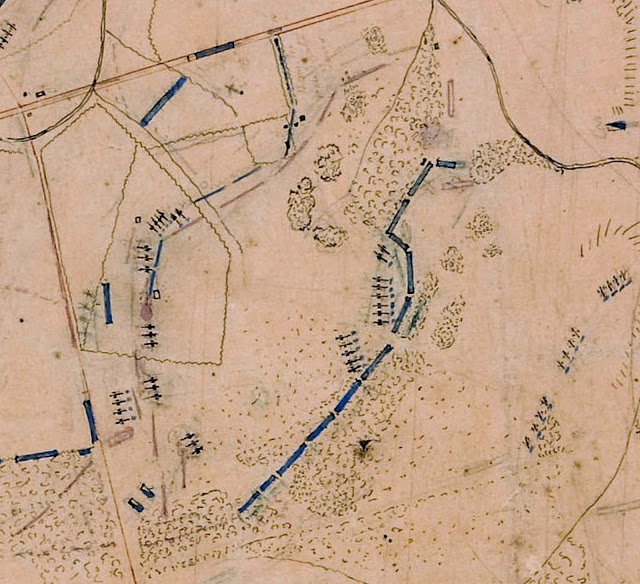 A combination of the Harris map and 1937 aerial photo.
Today the Park has "Jackson's artillery"  running north to south at center. 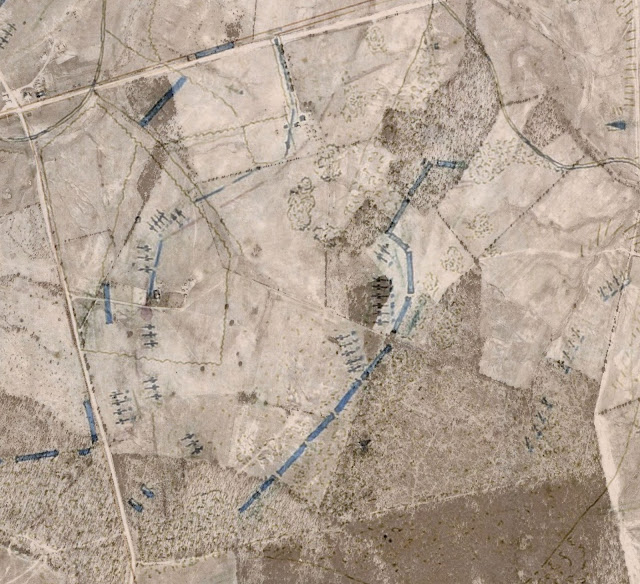 Below, from the farm lane Jackson's men came up, this view looks southwest, on the crest held by the five southern most guns of his artillery position. The line of trees along the right horizon was not there in 1861, and would have provided an ideal view of approaching Union infantry, and artillery. 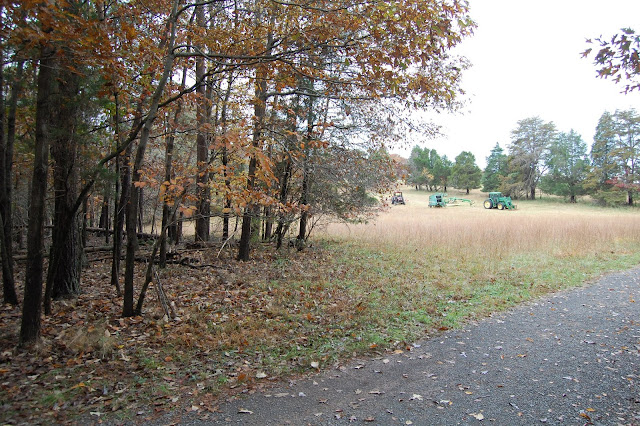 Below is Confederate Engineer, Captain David Bullock Harris, creator of the official map of the Manassas Battlefield for General Beauregard. His skills are demonstrated by its accuracy. 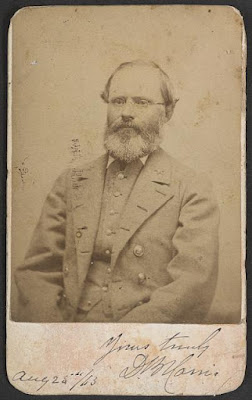 Here is a brief video from behind the plateau where Jackson positioned six guns of thirteen, and two covering the right flank where it overlooked a ravine. The remaining five were south of the farm lane, out of frame to the left of the camera. Further to the right, the flank was refused by Hampton's troops. Jackson's Virginians lay prone in the open ground in front of the camera.

I can see no room for argument or debate as to the merits and qualifications of the Harris map. He was a highly skilled and respected engineer with many defensive positions both designed and mapped to his credit. The faded condition  of the original, enhanced for our purposes here, made its use minimal until now. After all, no one seemed to question what was considered an "understood" field.

As stated earlier, this information also enhances a strong critique I maintain of the "Dean map", an artifact of note, but not as an accurate mapping of the field. I will follow up on that in a future post.
I will welcome any invitation to walk the ground for further discussion.

Below, we see the current presentation of Jackson's line, with the Henry House at distant center.
The Harris map gives great cause for reconsideration. 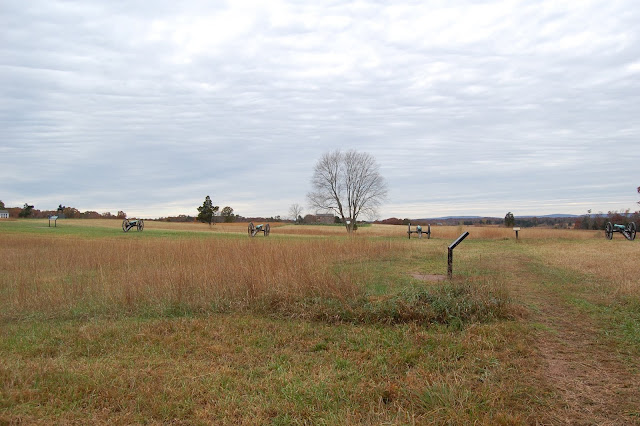