Death of Major General John Sedgwick - 150th Anniversary, On Location, To the Minute

National Park Service Historian, Frank O'Reilly, met an appreciable gathering on Friday, May 9th, to commemorate the life, and tragic death, of Union Major General John Sedgwick. Standing in the clearing where Sedgwick played out his final moments, those present were experiencing that drama 150 years later, to the hour, and to the minute. O'Reilly vividly recounted the moments that led up to Sedgwick's famous admonishment of his men, "I am ashamed of you! They couldn't hit an elephant at this distance!"
The General was struck somewhere around 9:00 A.M., Civil War time, approximately 10:11 A.M. modern time, making adjustments for daylight savings time and railroad time.

Your blog host filmed this presentation with the camera facing the direction Sedgwick faced, looking toward the open field to the left distance, the location from which the concealed sniper would fire the shot that killed the highest ranking officer on the field of battle during the Civil War. 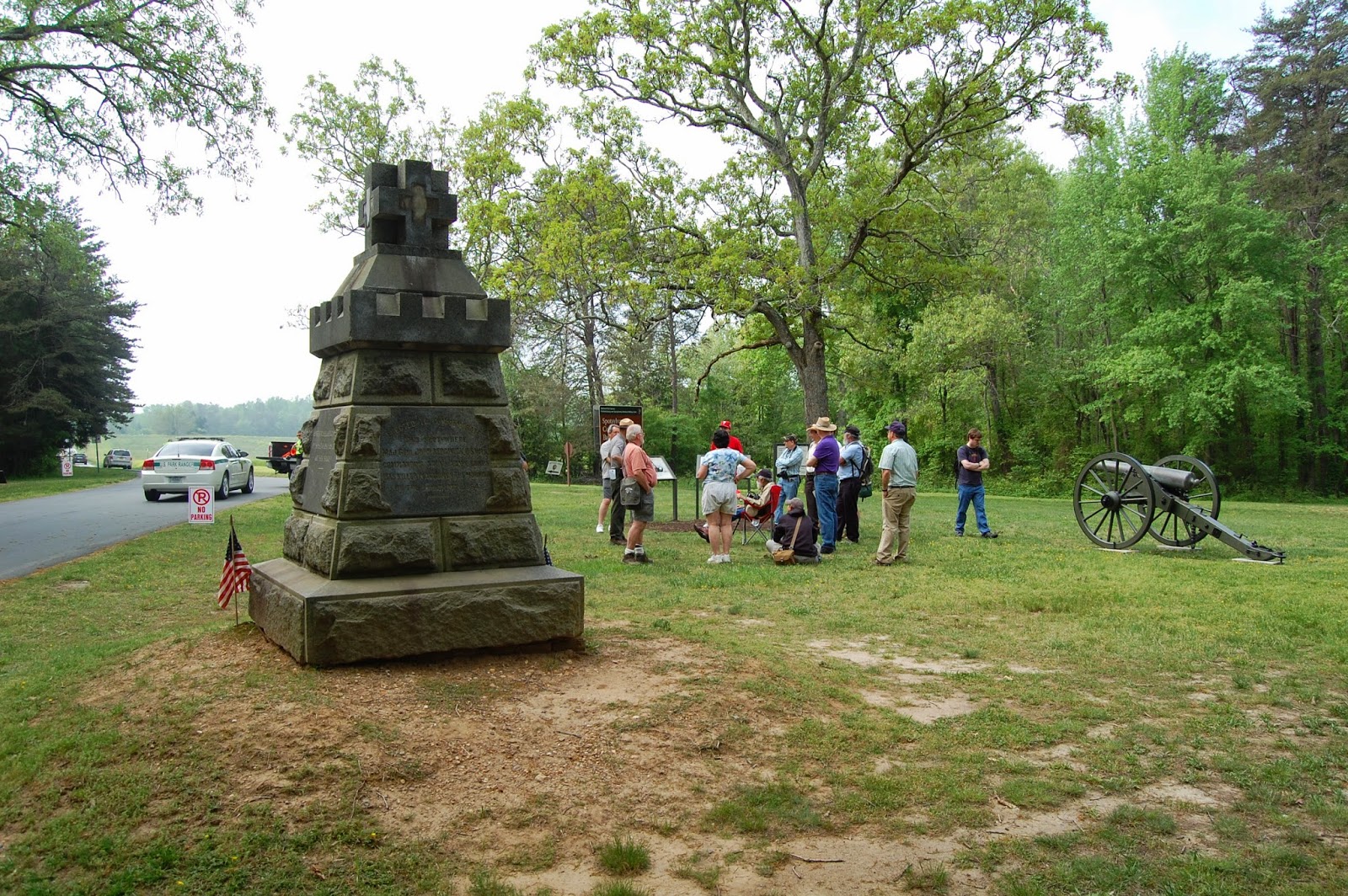 Looking southward from behind the monument to Sedgwick, which stands on the spot where he fell. 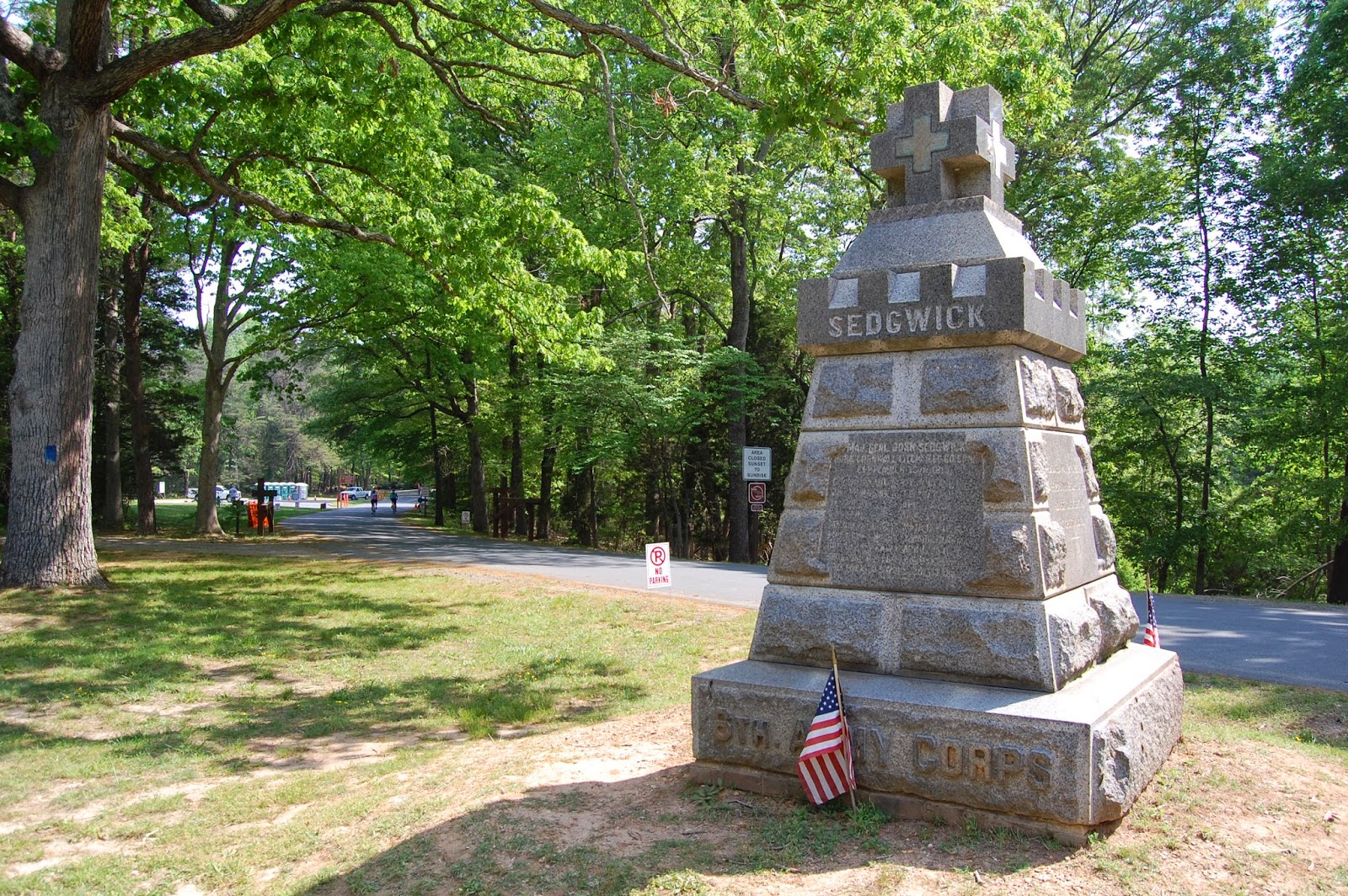 Looking somewhat northeast, with the Park's exhibit shelter at the left distance.
The monument was dedicated on May 12, 1887. 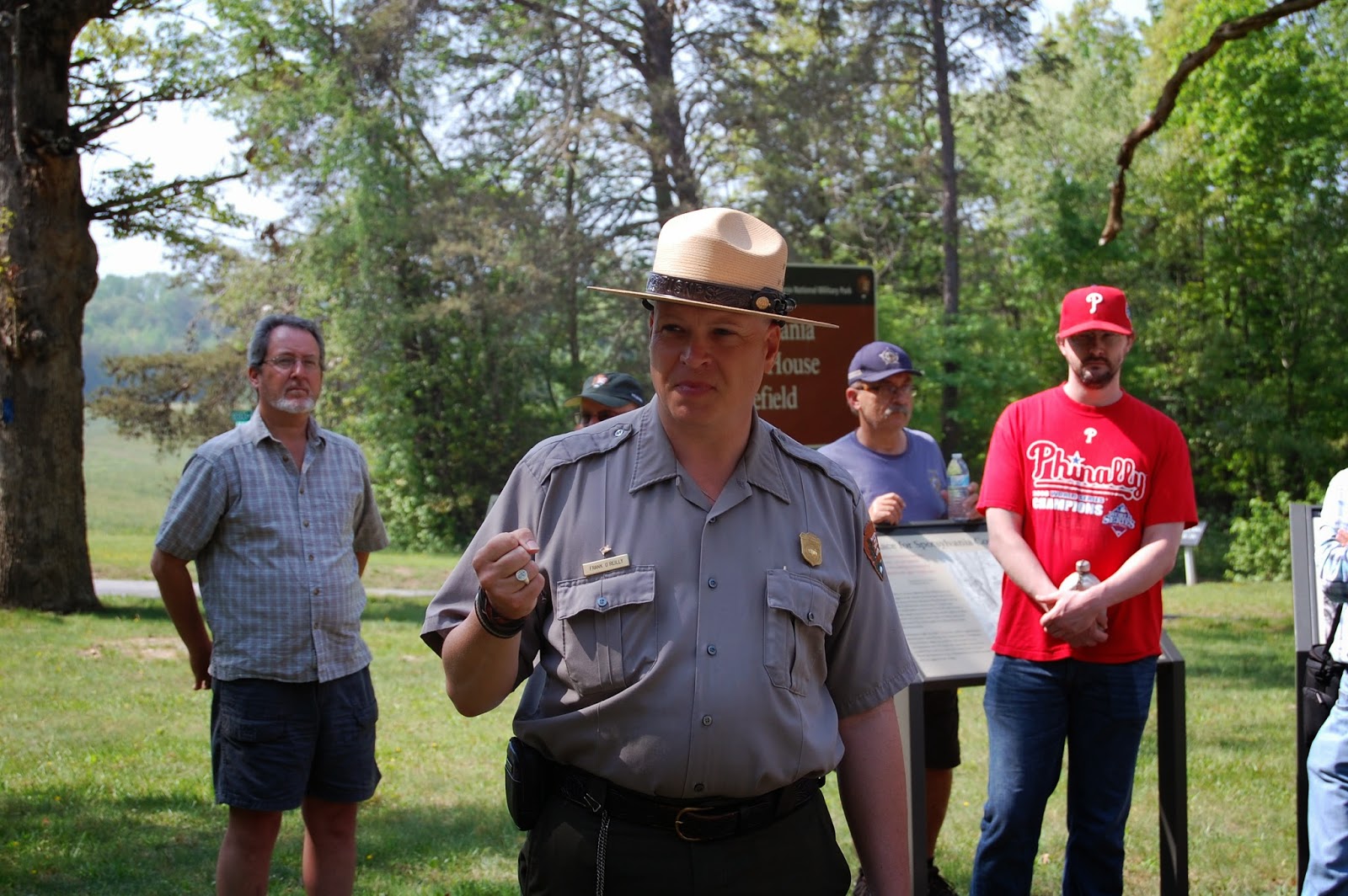 Frank O'Reilly, articulating a point at 10:34 A.M., nearing the conclusion of his presentation. 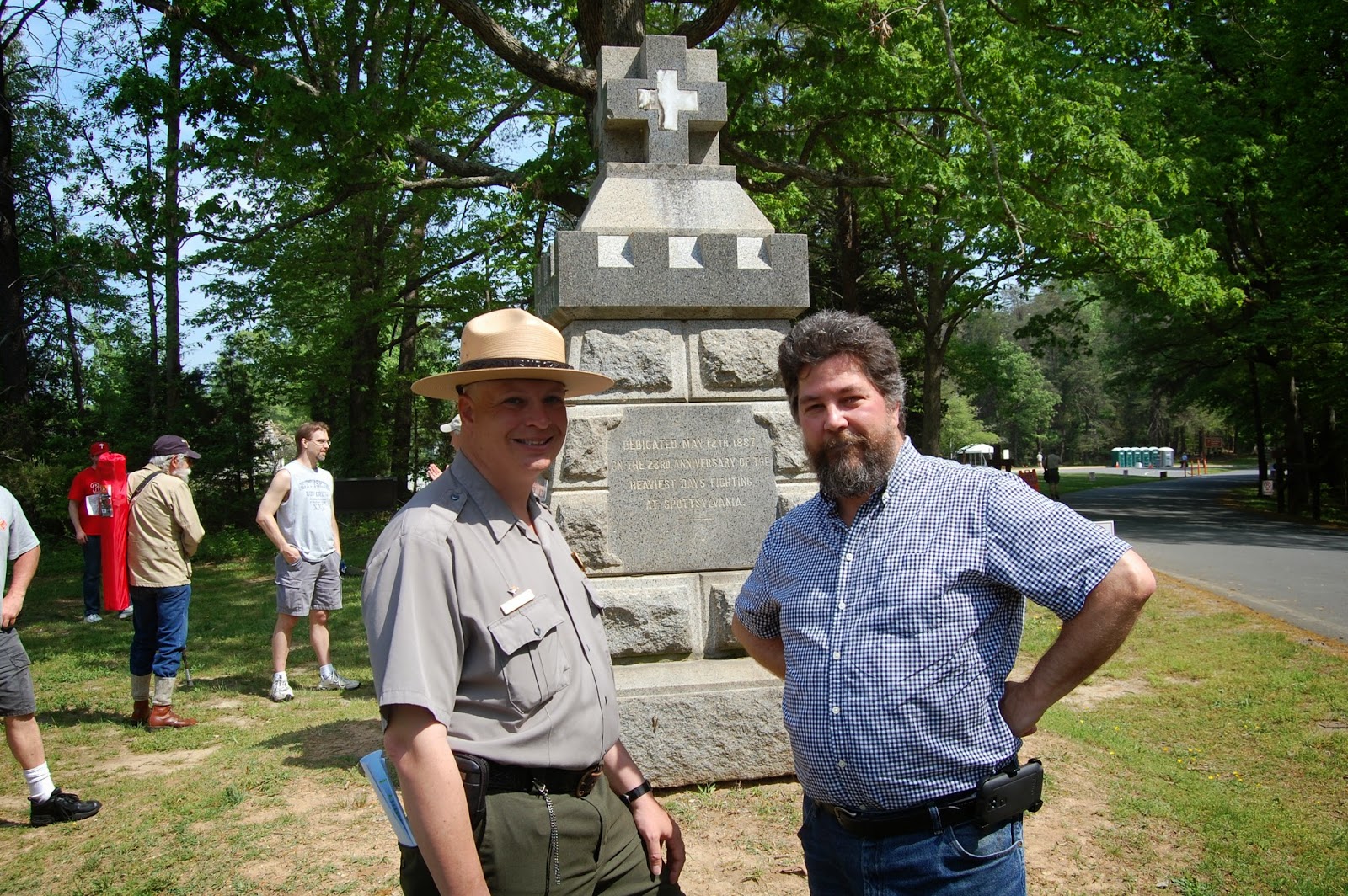 At the conclusion of the presentation, Frank O'Reilly and your blog host stand facing the field from which the sniper took aim, demonstrating the sun's illumination on Sedgwick's face before being struck on the cheek, below the left eye, just to the side of the nostril. 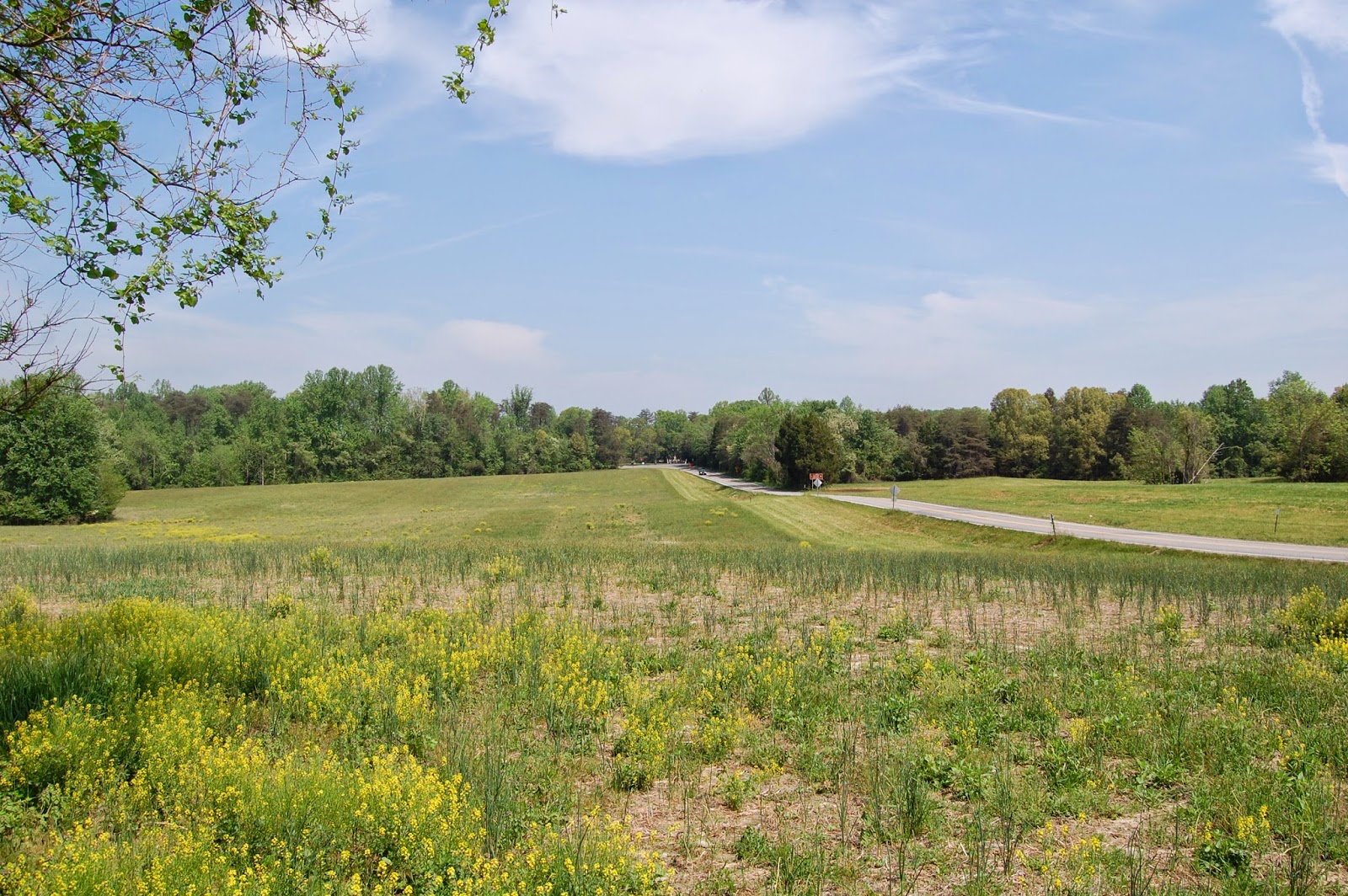 View from the sniper's assumed position, on an elevation roughly 445 yards south of the Sedgwick monument. The monument is just inside the notch at the middle of the woodline, where the Brock Road begins to disappear from view. 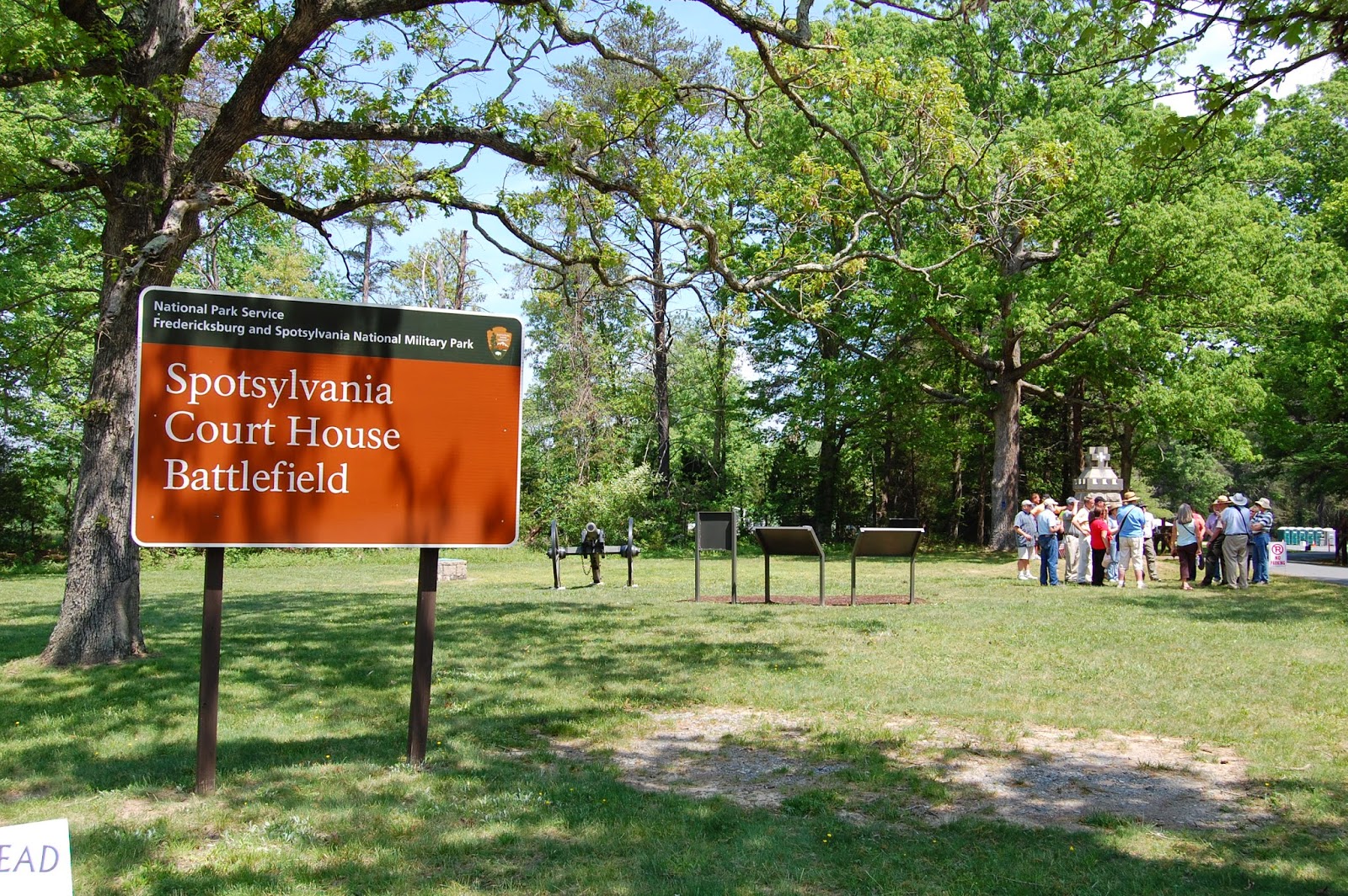 Posted by John Cummings at 7:45 AM

Hello John been a while since I commented. Great post as usual. Quick question, should you care to answer.

How in the world do historians know where to place the monuments on battlefields, especially the ones when we honor the location where a brave solider many have been struck down, for example the monument starring in this post and the point where Jackson was hit? Well two questions. How accurate are they?

Toby, monuments such as this were placed by veteran organizations that were of course comprised of people who fought on or witnessed the events. There are examples where it has been proven they were wrong or exaggerated positions, like the two in front of the Bloody Angle, but other documentation usually surfaces that clarifies things. The new McGowen monument at Spotsylvania is not really in front of the section they filled either.
John

Thanks so much. Just something I always thought about. I figured the monuments placed with the aid of the actual witnesses but my mind never grasps how those that witness such events remember the locations. I guess not being a Veteran or bearing witness to a battle I'll never "Get it".

John, you bear a resemblance to General Sedgwick

John,
This blog is incredible! So organized in every way and photos that added to the horrific sense
of sorrow. You certainly resemble my Great, Great Grandfather Lt. Col. Charles Wiebecke. I can't even imagine the pain and suffering that affected so many people. Thank you so much for remembering him. You certainly blessed me!
Sunny Joni Carol Cramer Cummings

Thanks for recording and posting Frank's presentation, John.