NOTE: the property described here, Whig Hill, is private property, and is posted against trespassers. Please respect the owner's right to privacy by observing only from the public thoroughfare.

Ten years ago this spring, I had the great, good fortune of visiting the house used by Union General Gouverneur K. Warren as his headquarters during the second week of the battle of Spotsylvania. Situated just over a mile northeast of the Confederate line in front of the Courthouse, it was the residence of Francis Corbin Beverly, a forty year old tobacco farmer that had served briefly as a Captain in the 9th Virginia Cavalry in the first year of the war. The estate is known formally as "Whig Hill". The date of the house is not totally certain, with some sources dating it to the mid 1700's and others to the first half of the 1800's.
When I say "good fortune", I mean it in every sense of the phrase. The present owner of the property is a very private individual that is quite guarded as to those that access his home. I happened to be parked near his mailbox that morning, at the end of his 300 yard driveway. I was taking photographs of a house and property across the street from his. Having observed me at a distance, he came out to approach me and question my purpose. I introduced myself and explained my reasons for what had apparently been suspected as suspicious activity. I freely presented my interest and efforts to document a photograph taken from his property in 1864, that looked in the direction of the house across the street.  Much to my surprise, and delight, he said I sounded like I knew what I was talking about, and thus invited me to come see his house up close when I had the time. "I have the time right now, if that's not inconvenient.", I said, and he kindly consented. From everything I had been previously told about this gentleman, this was a rare exception. My host was very happy to show me around the grounds and allowed me to make a few then and now comparison images utilizing two Timothy O'Sullivan stereoviews taken on May 19, 1864, as well as a photograph from the 1950's, taken as part of the Historic American Buildings Survey.  There have been some modifications to the house since Warren's temporary occupation, chiefly in the addition of windows to a northwest wall, flanking an interior chimney, and the enclosing of a porch that sits inside the "L" built into the southern exposure of its gable-front & wing design.
Interestingly, prior to Warren's headquarters, the house was used as an observation post by officers of the 34th Battery, New York Light Artillery. In an account written by Captain Jacob Roemer, he describes being sighted by the Confederates while on the roof of the "Beverly House". He states that the enemy fired a "number of shots at us from their batteries," and after leaving his perch for safety, through a skylight, "almost instantly afterwards the whole chimney came down with a startling crash."  This incident was said to have happened on May 12. Oddly, as NPS historian Noel Harrison pointed out in 1989, the photograph taken by O'Sullivan does not show this kind of destruction to either chimney, seven days later, if O'Sullivan's dating of his image is correct. One must wonder about such anecdotal material and the potential of embellishment for dramatic impact. A drawing done on the spot by newspaper Special Artist, Alfred Waud, gives no indication of chimney damage as well. Waud's work is dated two days prior to O'Sullivan's photographic exposures. Both images include what has previously been assumed to be O'Sullivan's darkroom wagon, parked to the left, with enclosed sides and back, made of a waterproof canvas with small windows. The question arises, was O'Sullivan's wagon parked at Whig Hill for at least three days, or is either date incorrect? Several scenarios are possible. O'Sullivan may have spent several days camped at this site during what had been extensive periods of on and off rain since the 12th. One must also fairly speculate if this is in fact not O'Sullivan's wagon. The vehicle is identical to Army ambulances in use at the time. There is indication, from other sources, that photographers refit ambulances for darkroom use to provide smoother rides for their delicate glass negatives and chemical bottles. The ambulances had better suspension systems so that wounded soldiers wouldn't be jostled so severely as they would have been in the back of a baggage wagon. All this aside, we have some wonderfully detailed images of this historic property, rarely seen by present day enthusiasts. The only previous publication of then and now pairings taken of this house was by photographic historian William Frassanito for his 1983 volume, Grant and Lee, the Virginia Campaigns, 1864-1865. During Frassanito's visit, the property was under prior ownership.
Now, on to the images. Click any image for larger viewing. 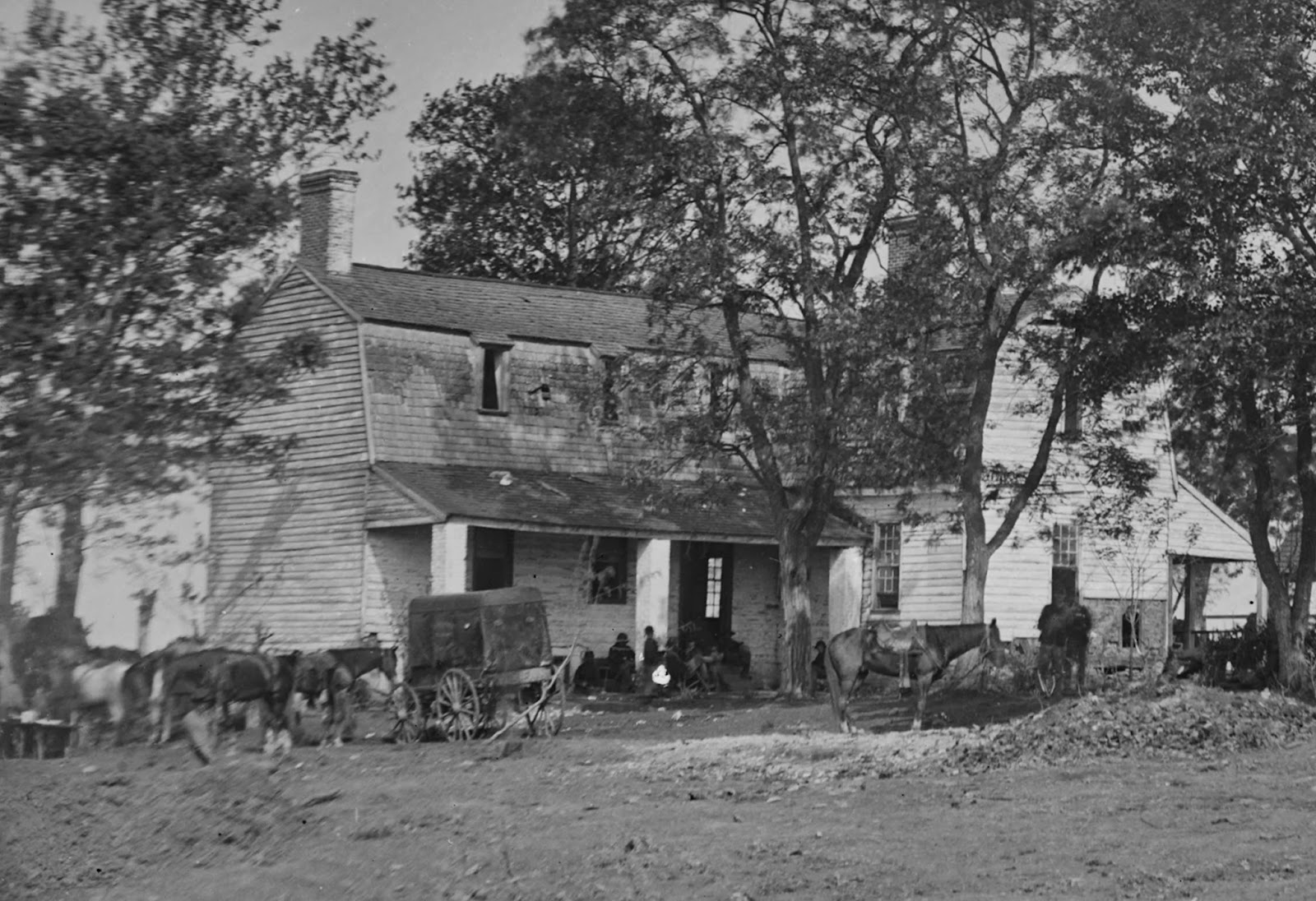 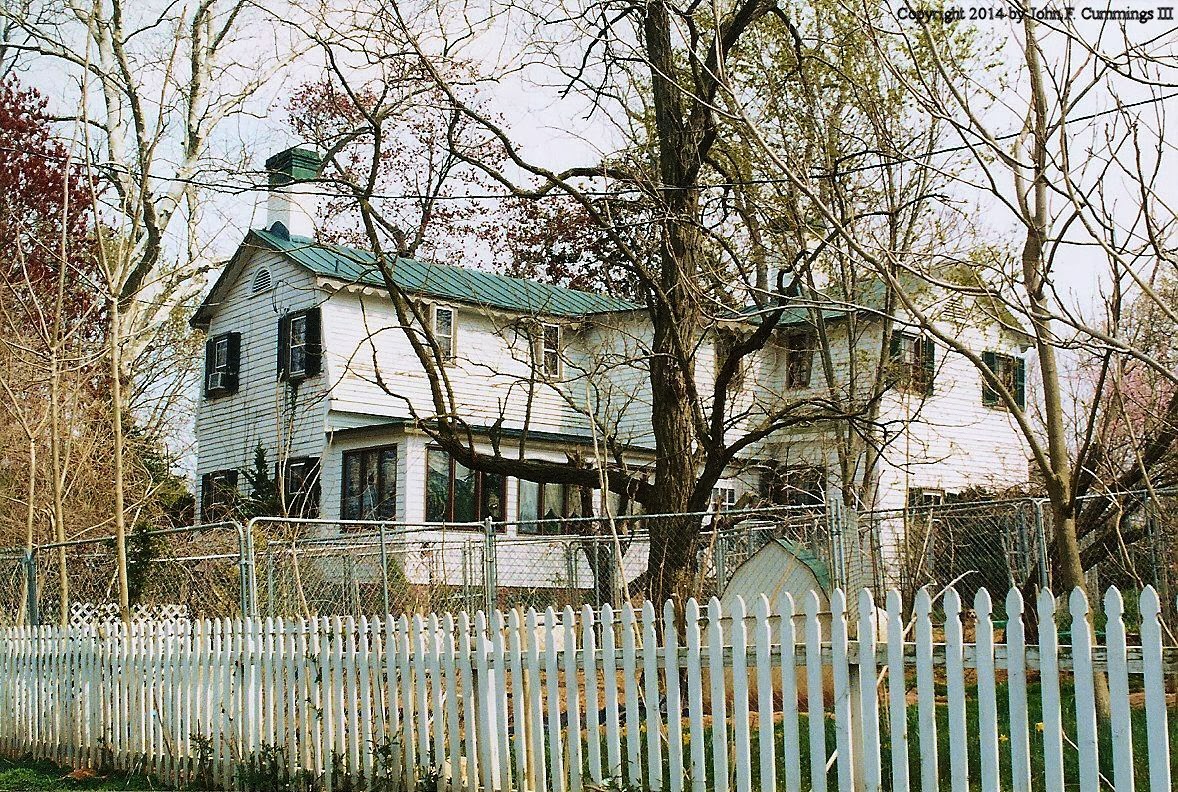 Above, my 2004 view of the same angle, looking eastward. 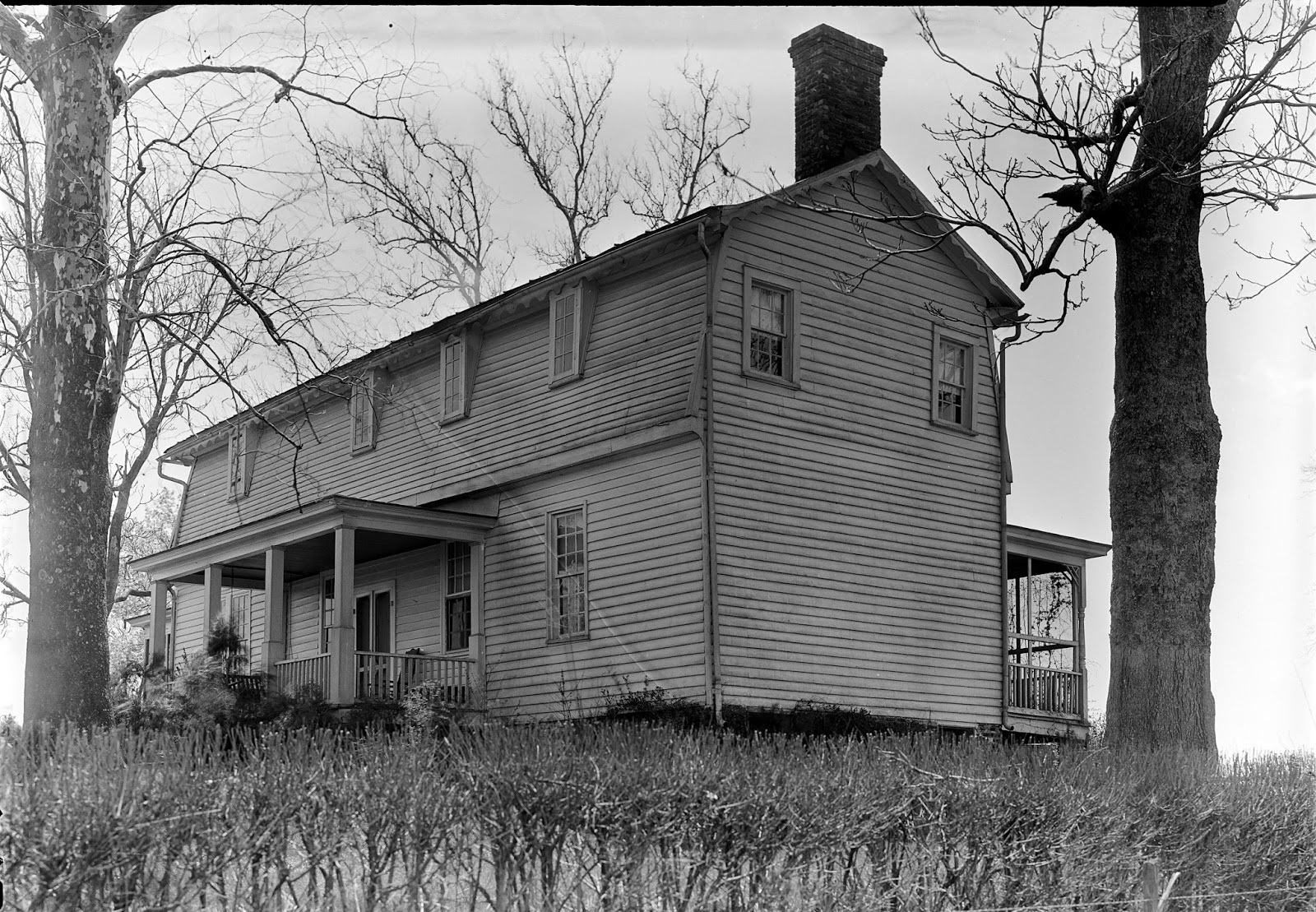 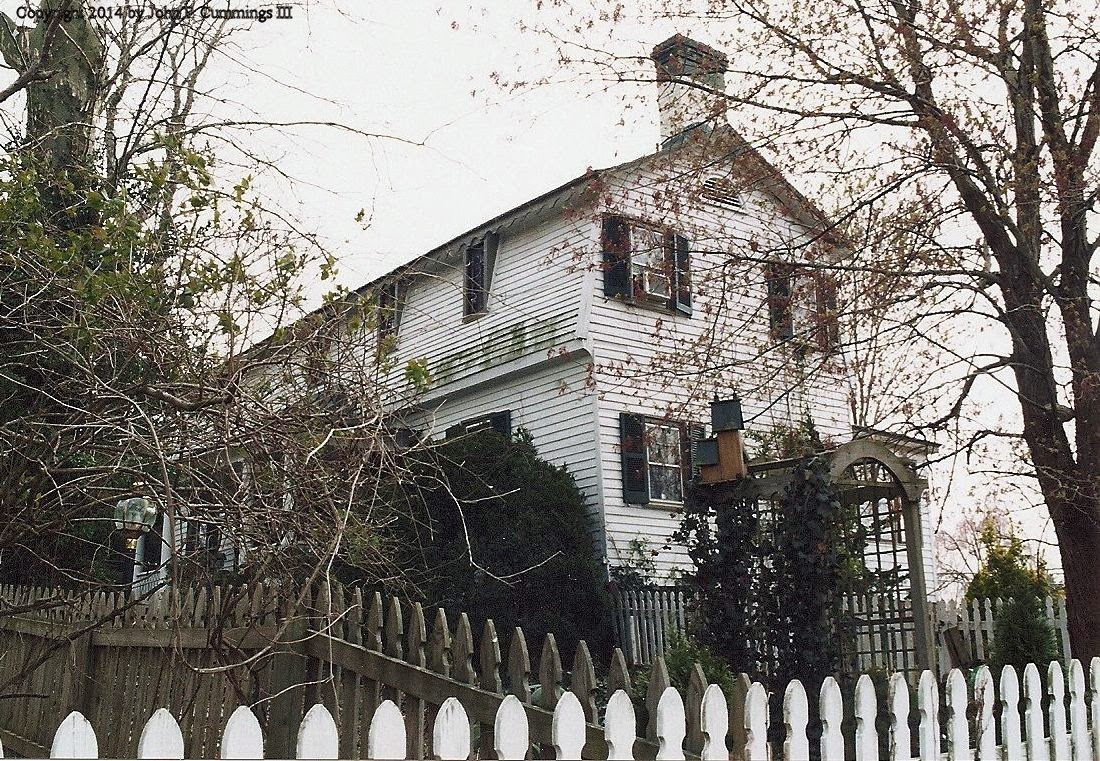 O'Sullivan's second view. The camera has been turned to look
across the property in a northerly direction. 5th Corps HQ baggage
wagons are in the foreground. In the distant field at right, the Union
reserve artillery is parked, per Frassanito, ready to be sent north.

My 2004 view from approximately the same camera position.
Note, the field in the middle distance was converted into a pond
in the 1950's, not long after the HABS images were taken.
The field where the reserve artillery was parked, beyond a
screen of trees, is still preserved today, although it is
surrounded by a berm, masking a subdivision. 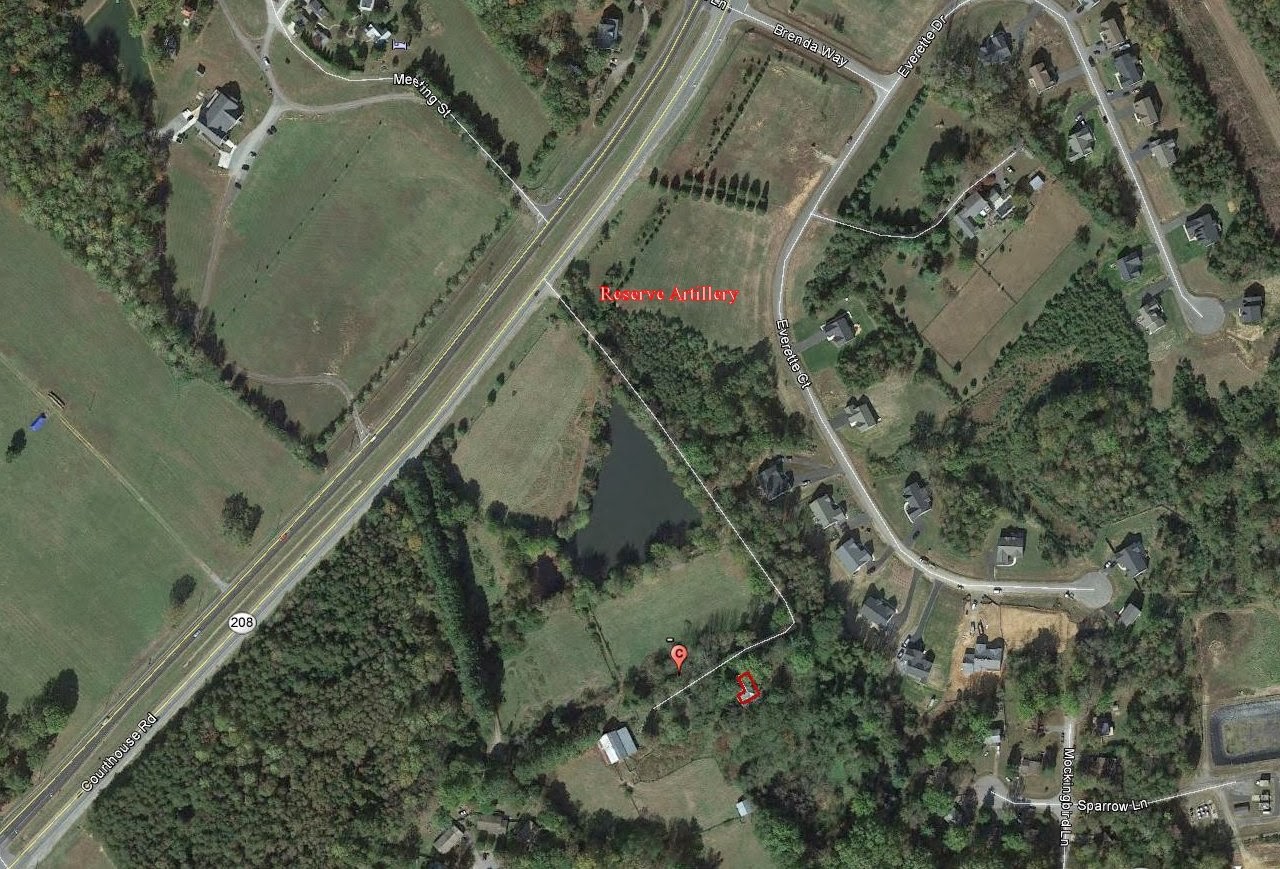 Aerial view of Whig Hill and surrounding neighborhood today. Originally 300 acres, the property has been subdivided, with the house remaining on roughly 20 acres. The house is outlined in red near lower middle, and O'Sullivan's approximate camera position is marked with the red tab, labelled "C". As stated above, the pond seen in the middle was created in the 1950's. The field where the Union Reserve Artillery was parked is labeled in red. On the north side of modern route 208, at upper left, is the site of Stevenson's Ridge, a premier special events facility as well as delightful overnight accommodations. 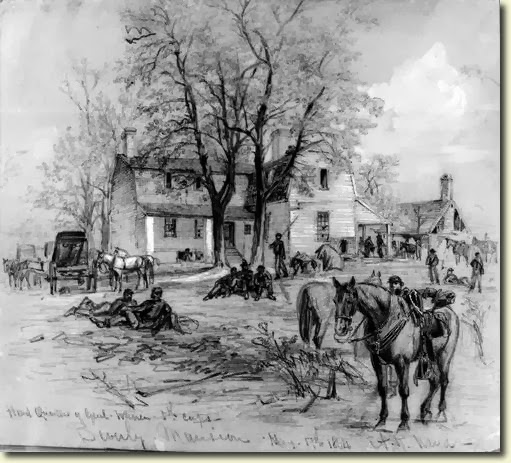