Do you have a spare four million bucks handy? Love history?

This morning I received an email from a good friend that contained the following link: http://www.farmandestate.net/Property-AUBURN_FARM

"Auburn", the home of staunch Unionist John Minor Botts near Culpeper, Virginia, is up for grabs to those with deep pockets. Botts won the home in a poker game in December 1862, and it was eventually well documented by photographer Timothy O'Sullivan in September 1863. Most enthusiasts of Civil War history are familiar with the following image of Botts and members of his family on the front porch of the house. It is probable that they are his three daughters, Rosalie, Mary Jane, and Isabella, but the older woman can not be his wife, Mary Whiting Blair, since some sources indicate she died on or before March 22, 1862. Her burial record at Shockoe Hill Cemetery in Richmond, Virginia, however provides a burial date of February 5, 1841, which may suggest she died shortly after the birth of her last child, Isabella, born February 3, 1841, with another source suggesting Mary's death date as February 12, 1841. The woman is then most likely Margaret M. Blair, Mary's sister, as she appears in the 1850 and 1860 census records as living with Botts and his children. The standing man next to Botts may be his son, Beverly Blair Botts, the only one of four sons that were living by the time of this image. Click on this, and all images, for larger viewing. 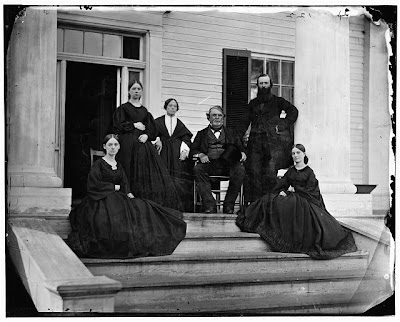 Botts had been jailed in March 1862 by the Confederate government for his unflinching anti-secession views, and held for eight weeks in solitary confinement. He was released only after he swore to hold his tongue from additional anti-Confederate rhetoric. He was again briefly detained by order of General J.E.B. Stuart in October of 1863, one month after most of these photographs were taken, for supposedly entertaining Union officers at his dinner table. 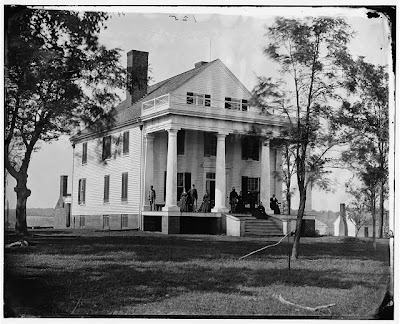 Although an unwavering Unionist, Botts was still a slave owner. Three of his slaves had run away to Union camps in the area, and when Botts attempted to recover them he was firmly rebuked, being told that his former "property" had become "free" upon entering the Union encampment. 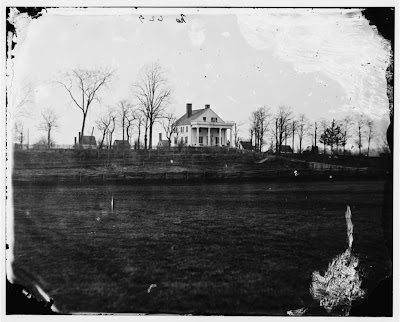 The vast estate of "Auburn" was host to three "Grand Reviews" held by both armies, the first by Confederate General Stuart on June 8, 1863, the day before the battle of Brandy Station. Two more would be held by Union forces under General Meade in April 1864, and General Grant in May, just prior to the launch of the 1864 Spring Campaign. The above winter view was taken by a currently "unknown" photographer.

A stereo negative of the home, by O'Sullivan, taken September 1863. 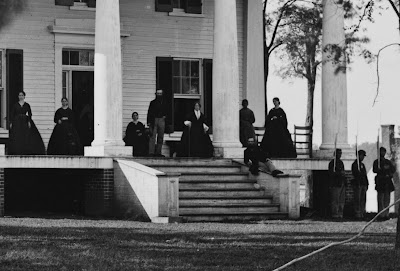 The cropping seen above, of the previous stereo image, shows the comfortable Botts family under protective guard of Union soldiers, perhaps the incident that provoked Stuart to arrest Botts the next month. Below, an enlargement from another view, with two women in comfortable association with a Union junior officer two months after the northern victory at Gettysburg. 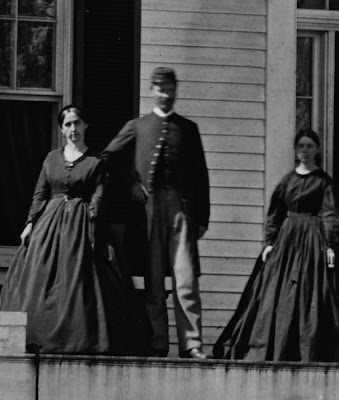 Another interesting enlargement below provides a glimpse, perhaps, of one of the Botts' chattel, standing meekly, but at the ready, behind the column at center. Freedom was not far off for her. 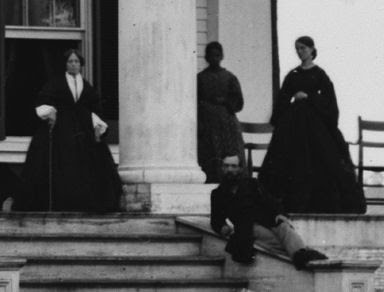 All images presented here are from the collection of the Library of Congress.