All Roads Lead To Spotsylvania

When students of the nineteenth and twentieth century visualize our nation's past, it generally resides in black and white or sepia toned images of captured light and shadow. The photographic process was largely limited to such monochromatic renderings until the past fifty years or so. The three photographs included here are from the collection of the Fredericksburg and Spotsylvania National Military Park. The first was taken just three years before the establishment of the park, and probably depicts one of the simple, dirt farm lanes that led to the interior of the main battlefield, land still owned at the time by subsistence farmers such as the Landram family who had tilled the soil since long before the Civil War. My personal belief is that this shows the lane that came off of Brock Road, approximately one and a half miles from the Spotsylvania Courthouse area, shortly before a now removed entrance and exit of Anderson Drive, one of the park access roads built by the Civilian Conservation Corps in the mid 1930s. Clear traces of this lane still run through the woods, bisecting the final Confederate line as it did in May 1864. 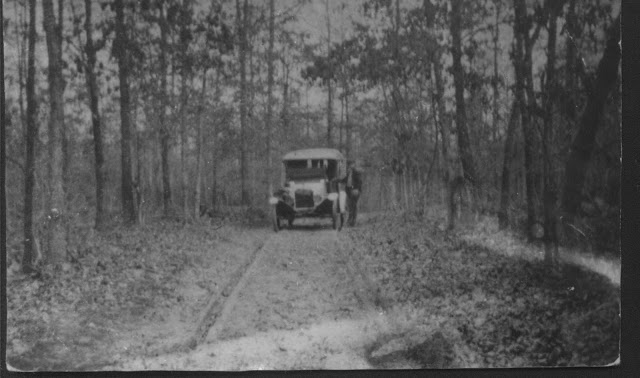 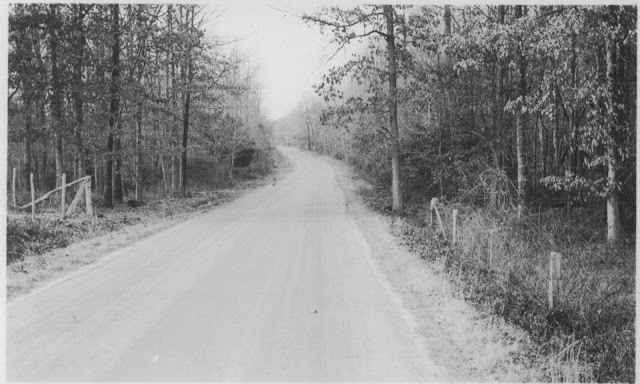 "Brock Rd looking N.W.", dated December 1935, taken just before the Kodachrome process made color photography more accessible, although relatively expensive, for the general public. This view shows the slight bend in the road before the Trigg Farm, beyond the trees on the left. Brock Road had retained much of its old time character in this area, still a narrow, two lane connector between neighborhoods, not far from its utilitarian appearance in 1864. 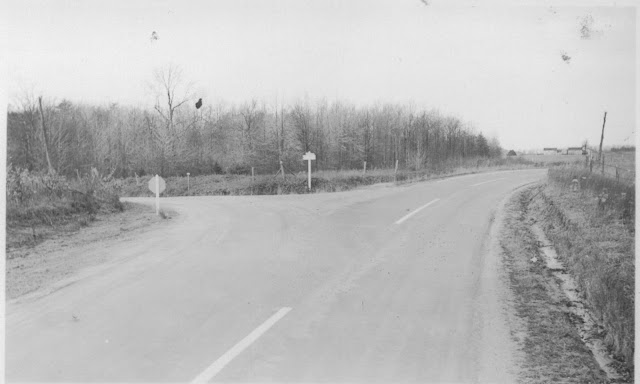 NPR Story Made Critical Error In Quest To Identify Soldier

Click here for the NPR followup correction dated April 17, 2012
This morning (April 11, 2012), National Public Radio delivered a very well thought out human interest story with some in-depth research, but... one technical misunderstanding threw the whole story out the window. It all begins with a Civil War photograph from the Liljenquist Family Collection of Civil War Photographs, a recent gift to the Library of Congress. NPR reporter Ramona Martinez was curious about one particular image showing what appears to be a member of the 14th Brooklyn Regiment. Her interest arose from a set of initials carved into the butt stock of the rifle musket held by the soldier. Tom Liljenquist had suggested that what appeared to be the initials "T.A." could be a clue as to the man's otherwise unknown identity. Martinez set off on a journey to see if she could discover the soldier's identity based on the initials and the probability that he was a member of the 14th Brooklyn as suggested by historian Mike McAfee. After much digging and a well thought out process of elimination, she concluded that the soldier in question must be Thomas A. Ardies. Please click this link to read and/or listen to the story. The NPR site contains several images to illustrate the research methods. The running error regarding the image was most likely sustained by the reporter not revealing the underlying interest in the initials, having advanced queries to Mr. McAfee strictly on the uniform identification, and soliciting the further assistance from the folks at The Horse Soldier, who were helping to establish the soldier's height in comparison to the identifiable weapon. I am confident that Mr. McAfee, and the Horse Soldier staff both, would have advised the image was mirror reversed had this been brought up. (See NPR reporter Ramona Martinez's response to this in the update added at the end of this post.)
Here then is the error that mars this otherwise intriguing tale. The image, as presented, is a tintype, a photographic method that produces a mirror image of the subject. Thus, the initials that look to be "T.A." are actually "A.T.", leaving a still unknown man who, if indeed correctly identified as a member of the 14th Brooklyn, could be one of the following:
August Thiery
Andrew Thomas
* Alonzo Thompson * Click here for the NPR followup correction dated April 17, 2012
Albert Tibal
Alfred Tickner
Augustus Ticknor
Andoniram Tucker
Andrew Turley

Below is the image as it appears when viewed in its case. The Library of Congress provides the following: quarter-plate tintype, hand-colored ; 11.1 x 9.5 cm (case). 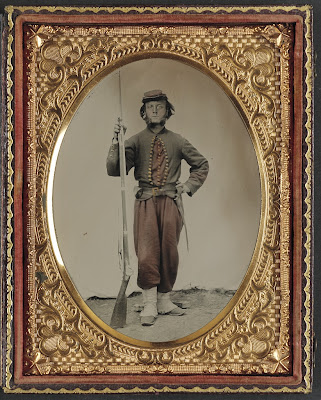 Below, I have mirror reversed the image to correct the error, and present the soldier as he should appear if he were standing before you. 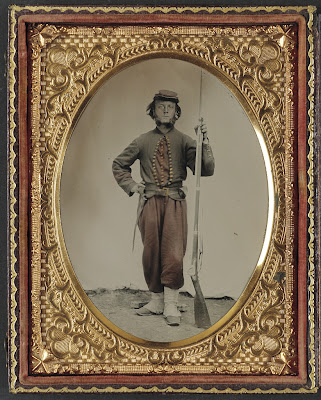 Below, the original mirror image gives the casual viewer the impression the initials are "T.A." 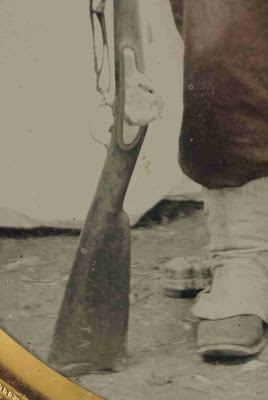 Below is an image I created by writing the initials on clear tape and applying them to the butt of a similar rifle musket. The image has been deliberately mirror reversed here for illustration purposes. 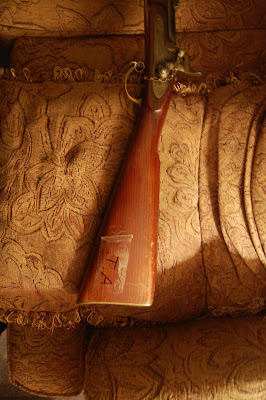 Below is the same image as it is correctly photographed, demonstrating that the initials are indeed "A.T." 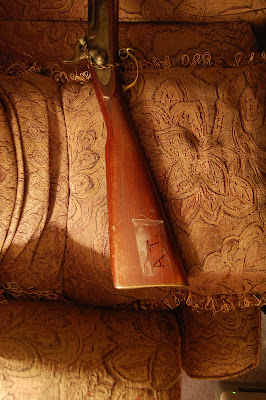 Update of April 11, 2012
After posting this morning, I received an email from the NPR correspondent:

Hi, John. I did the piece on NPR that you wrote your blog post about. Your points are completely valid, and we’re looking into the ATs right now. I did want to let you know one thing though regarding your blog post: "I am confident that Mr. McAfee, and the Horse Soldier staff both, would have advised the image was mirror reversed had this been brought up." In fact, all of the people consulting to do the story, including the Library of Congress photography staff who’s interview ended up on the cutting room floor, believed the image to be T.A. We’re all doubling back and looking into it, but people seem to be split fifty fifty on the issue for whatever reason. That being said – your evidence was compelling enough that we’re investigating the A.T.s and going to try and fix the error if it is indeed wrong.  It just seemed in the piece that I only asked the Horse Soldier and Mr. McAffee about specific things, but in fact they were consulting about all aspects of the photo. It’s just that since it was a 4 minute piece, not everything could be included. Thank you for your interest in the piece however and pointing out the possibility that it may in fact be A.T. We’re looking into it, so you may very well be responsible for setting this soldier’s story straight! I’ll be sure to let you know the result.
Kind regards, Ramona

﻿My reply follows below:

I really enjoyed your article, and your methods were solid, but I was surprised by the lack of visual comprehension regarding the mirror imaging, even more so now that you indicate no one else picked up on it during the investigation. I am confident that my illustrations in the blog post provide the correct translation. Hopefully the "A.T." will bring you to a solid conclusion. All these men deserve remembrance. It is a shame that so many have gone through the passage of time without lasting identification. Thank you for all your efforts to put a name to the face in this case.

Further Update! April 12, 2012
At 12:12 this afternoon, NPR reporter Ramona Martinez posted a comment on the NPR site acknowledging the error, and promising further information on the subject in the near future:

"We are in fact looking into the initials, and probably a week or so we'll have information on who the 'A.T.' soldier would be, how the mistake was made in the first place (and a little more about tintypes and their orientation) and answers to more of your historical questions that didn't make it in the piece due to its length. Stay tuned! In the meantime, do me a favor and remind people we're working on it in case this gets eaten by the comments board! - Ramona"