Before reading any further, if you are a novice to the photographs of Civil War dead at Gettysburg, and you have a delicate constitution, and/or get squeamish at the sight of mutilated bodies, you may not want to read further. So be WARNED, there will be, following this block of text, some vivid imagery, all very real and recorded within a few days after the conclusion of the battle in July 1863.
Photographer Alexander Gardner made his way onto the field with his crew of assistant photographers with the intent of recording the horror of what transpired there, just as he did the previous September when he photographed the dead of the battle of Antietam, Maryland. Beyond this brief introduction, I have no purpose with this post to go into greater detail of the well researched and documented story behind the images taken. My purpose here will be to illustrate one small aspect of the series created that day, and that is the issue of the "prop" rifle that is seen in a number of the scenes taken along the south end of the battlefield. I believe it is clear that the photographers used only one weapon along this journey, toting it about from subject to subject, for about the extent of roughly a half mile before discarding it in all likelihood. Small arms had been collected from the field by the Union Army prior to, or along with the burial crews that cleaned up the battlefield. Something the local citizenry was appreciative of.
Here, I will make a hypothesis, that once found, on or near the Rose Farm, this rifle was a visual prop that Gardner would exploit to add a bit more drama to the dead who had otherwise been stripped of most military equipment.
It is my theory, and I suppose I am not the first to suggest it, that Gardner moved south from the series taken on the Trostle Farm and arrived on the Rose Farm, finding a large number of Confederate dead who had been assembled in burial formations. The Rose Farm images are thoroughly documented by William A. Frassanito in his famous book, Gettysburg: A Journey In Time, published in 1975, and expanded upon in the follow up work, Early Photography at Gettysburg in 1995. In consideration of the locations of these images, discovered by Frassanito, I might suggest that the first or one of the earliest on that site was a lone soldier horribly mutilated, either by an artillery shell or as some suggest, post mortem by wild hogs. I will not venture any speculation on that issue here, but what I am interested in is that this is the only (that I recall) view taken on the Rose Farm that shows an obviously placed prop gun. In the image the underside of the wood stock is visible, and only the muzzle end of the barrel can be seen, badly rusted, with a bayonet incorrectly attached on the end. The locking mechanism of the bayonet has not been engaged on the front sight of the barrel. The bayonet is not seen in any of the later images from that day. Again, this is also the only time that the rifle is seen on the Rose Farm series, I would think, because this was the only body presentable that was not pulled into a burial formation. It was the only view where one could suggest that the body was in situ, as he fell from the ghastly wound. WARNING, I am about to show this image, and it is very graphic. I have also turned the image upside down so as to make the rifle easier to view and appreciate within the context of the other images I will show, most of which, it can be easily seen are utilizing the same rifle.

Below, a detail of the muzzle end of the rifle, showing the incorrectly attached bayonet. The important element here is not the bayonet, the important thing to note is the rusted nature of the visible portion of the barrel, from the front sight (to the left of the blade of grass at center) to the front end of the wood stock, showing the receiving channel for the ramrod which is missing. 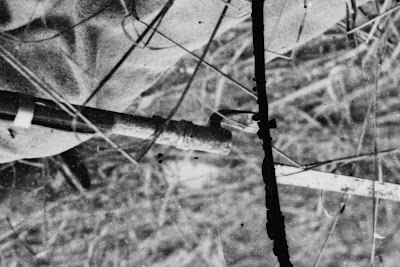 The next image below, is taken at a location to the south and then east of the Rose Farm series, about a 730 yard journey, inside the stone wall of a feature known as the "Triangular Field". It shows a  prop rifle in front a dead Confederate. Clearly there is not enough detail in this image to verify that it is the same weapon as the Rose Farm rifle, but I wager it is, based on the next two images. 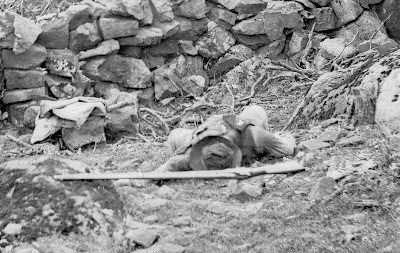 Somewhere within 43 yards or so, directly east of the previous body, was that of another dead Confederate, the subject of one of the most discussed issues of a body being moved to facilitate a more "romantic" image of a soldier's agonizing death. This is a subject well covered by Frassanito and others, and I am only interested in focusing on the gun seen in both views. A detail from this image, below, shows a clearly rusted muzzle end of a rifle. Here I have also turned the image over to better view the rifle in context to the story. 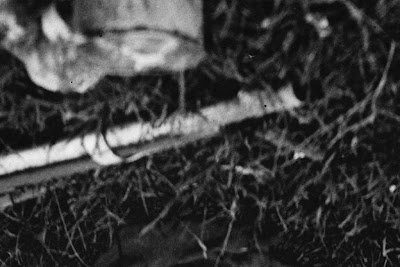 Proceeding down the length of the barrel we can see a very distinct pattern of rust, also apparent on the lock plate assembly. Combined, all these rust patterns will indicate the use of the same "prop". 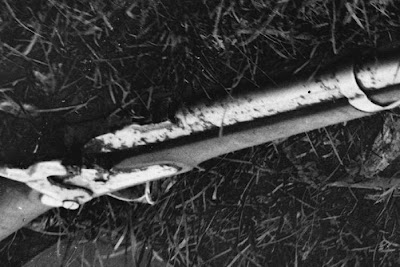 Below, a larger view of the flipped image, showing the entire weapon. Get its rusted features firmly in your mind. The next image will clearly show this weapon in the more famous view of this body.

Another 75 yards or so, directly east, Gardner is said to have moved the previous body to a more interesting location, a sharpshooters lair. Here, in the detail, the very clearly rusted muzzle end of the rifle now leaning against the stone barricade. Also visible is the distinct rust pattern on the barrel and lock plate further down. 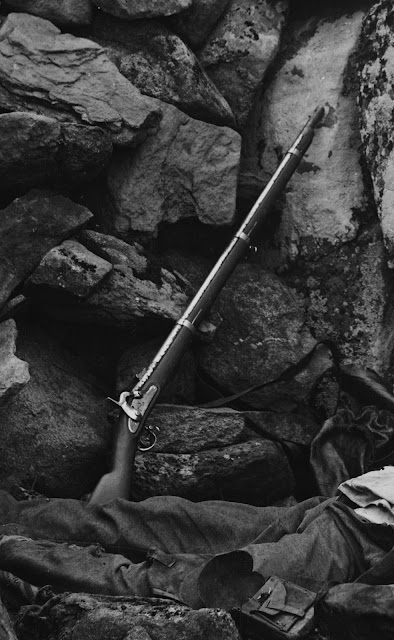 Below is an enlargement of the rusted muzzle, which to my mind leaves no doubt it is the one on the Rose Farm. 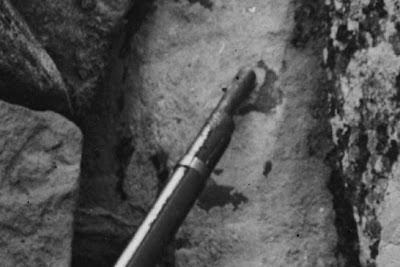 The fingerprint like uniqueness of the rust along the barrel as it sits in the wood forearm of the stock. 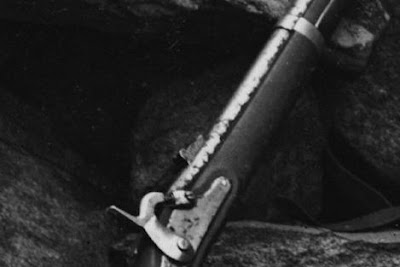 The next image, below, shows a prop rifle placed with bodies about 205 yards south and east, in the area of a post-war trolley line, now used as a foot path. The details of that are available in Frassanito's, Early Photography at Gettysburg. The details are not clear to say for certain, but my wager is we are looking at the same rifle. That is supported by the details of the next image we will examine. 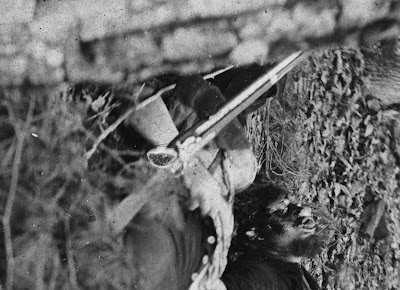 About 125 yards slightly northeast of the previous bodies is the scene below, in an area dubbed, "The Slaughter Pen". In this gruesome detail of a dead Confederate exhibiting massive head trauma, we can see what appears to be the same prop rifle, based at first look on the rusted muzzle end. 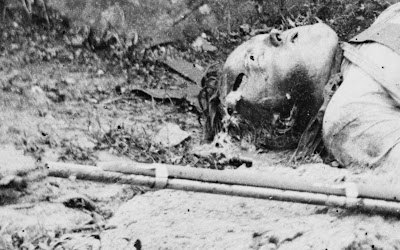 Below, we look further down the barrel and we can see what appears to be the very distinct rust pattern again, along the stock and rear sight. 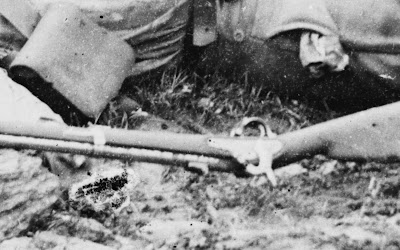 Below, we see the full image of this photograph. This rock is very near the Devil's Den parking lot, along Plum Run. It is here that I believe the rifle was abandoned by Gardner. To my recollection I don't believe we see a prop gun in any of the views Gardner took on Little Round Top. I may be wrong, but I believe this indicates the path Gardner took after leaving the Trostle Farm. There were other images taken that day in the area of Devil's Den, including the famous portrait of newspaper artist Alfred Waud, but they are all within the reasonable path of the ones I have presented here. 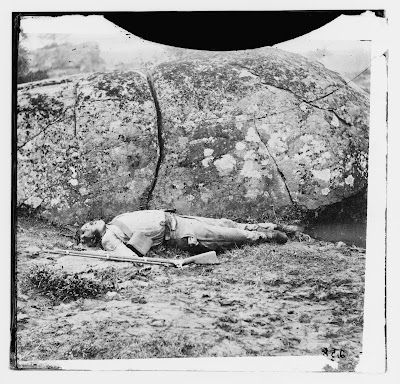 Here is a map that marks the approximate position of the images presented here, starting with the mutilated body on the Rose Farm, marked as A, in the upper left. From there it is quite possible that Gardner's crew swept south, around the large, wooded area, and then east to arrive at the Triangular Field where the next body was located about where I have marked B. Continuing east, then south around the boulders of the Devil's Den area, finding the next bodies below and along Plum Run, marked, E and F. From A to F we are looking at a distance of around 3/4 of a mile. 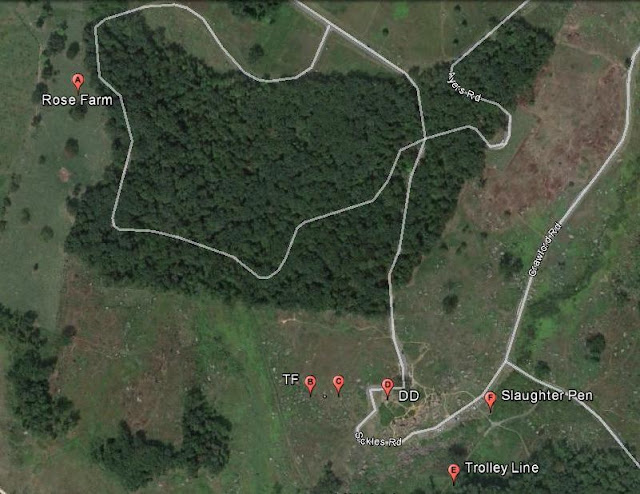