Battle Damage - The visible effects of shot and shell

Today's post is a follow up on the previous. The attached photograph is a detail from one made, in all likelihood, one hundred and forty-four years ago to this day, April 14, 1866. It was part of a series made under direction of a U. S. Army Surgeon, Dr. Reed Bontecou. The doctor and an entourage traveled the battlefields around Fredericksburg during the week of the one year anniversary of the end of the war. Their journey, and the series of images they made, one hundred and twenty-one in all, are the subject of a book I am preparing for the publisher, with expectations of finishing within the next few months. My research into this subject began nearly six years ago, and in that time many assumptions have been overturned. 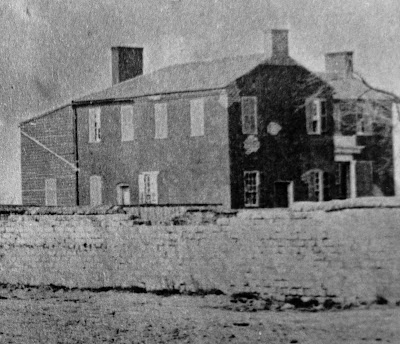 This particular image, negative number 114, shows the brick house referenced in the discussion yesterday of Waud's sketch of an assault on the village at Spotsylvania Courthouse on May 9, 1864. This close up view of the brick house shows clearly, repaired damage to the front wall, particularly in the upper left corner. It is rare to see images of obvious repair made to buildings during this period. In the span of nearly two years since the fighting that had caused it, the owners were able to reclaim their property and get back to what would hopefully be a better life than they had experienced during the war. The viewer can see (especially when enlarged) the unpainted brick patches, contrasting sharply with the surrounding area. The damage would have easily been done by Union field artillery, Parrott Rifles and/or 3-Inch Ordinance Rifles, placed around 1,200 to 1,300 yards to the east of the house. Based on the location of known artillery lunettes, the trajectory would bear out this premise. Damage known to have been inflicted on the Courthouse building itself (across the street on a diagonal), puts both structures in the same line of fire. Additional, unrepaired damage can be seen on the whitewashed wall at bottom of this view. This brick wall surrounded the Courthouse lawn, but was removed around 1900.
This supplemental image is a detail from a photograph of this house circa 1905. The same areas of damage and patching are still clearly visible, nearly forty years later. Sadly, this structure was burned down on July 13, 1930. 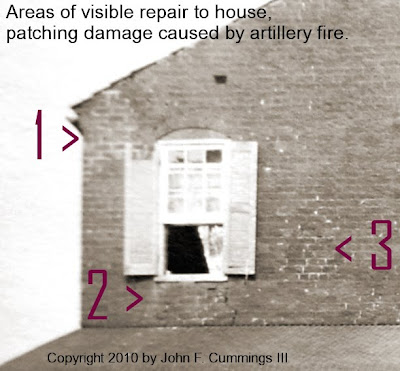 The reader may want to check the back issue of "Civil War Times" magazine, April 2009, to find an additional article I wrote on the journey of Dr. Bontecou. It provides further preview material of my forthcoming book.

Your work with the Bontecou images never ceases to impress me, John. Noel

I've always enjoyed these close up examinations. Thanks for sharing.

I confess I could have looked at that image for 100 years and not spotted the repaired areas you picked up. Very nice job. Do the book! John Hennessy