An Ounce of History

Around the time the Civilian Conservation Corps was constructing their version of the Stone Wall at Fredericksburg, Park Historian Ralph Happel (1911-2002), declared to his coworkers that he’d pay a dollar for any bullet found in the vicinity. Ralph was confident that nearly seventy-five years after the hostilities there, nothing would or could remain in such a well traversed spot. If not already swept clean by souvenir hunters in the early days then certainly the local poor had scavenged them up to sell as scrap, a common practice soon after the war’s end. Journalist John Trowbridge witnessed women and children doing just that in June 1865 when he visited the war torn region. Fredericksburg had been one of his stops in Virginia, and he wrote about it vividly in his volume, “The South: A Tour of its Battlefields and Ruined Cities.”

Despite his confidence Ralph was met one day in the fall of 1937 by Beau Purvis, who gladly claimed that dollar. In those days a dollar was indeed a welcome reward! A gallon of gas cost 10 cents. Today, with inflation, that one dollar would be worth fifteen.

When Happel passed away in November of 2002, his estate was handled by respected area antique dealers and long time friends of Ralph and his wife Louise. Among his compiled archives and books were some items of material culture he had collected in his long career. Within that trove, tied with wire to a yellowing 4”X6” card, was the bullet Purvis found along with Happel’s type written notation:

“Lost & Found – Minie ball found by Beau Purvis near south end of Sunken Road, Autumn, 1937, and bought by Ralph Happel for the dollar he said he’d give for any bullet there picked up (thinking that none was left in such an accessible spot)” 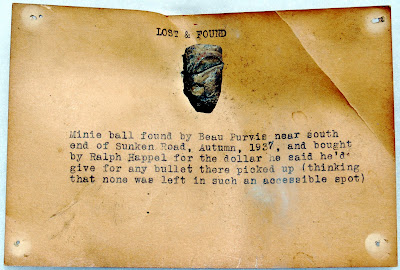 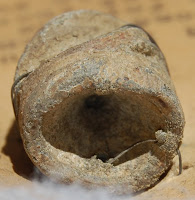 Three close-up views of the bullet found by Beau Pervis.
Note the holes drilled through the lead projectile,
securing it with thin wire to the card. Though mangled,
it appears to be of .54 caliber, a size and type
used by both sides during the war. 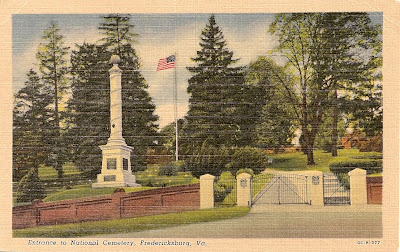 A "linen" postcard from the era the bullet was found,
depicting the south end of Sunken Road and the
entrance gates to the National Cemetery. 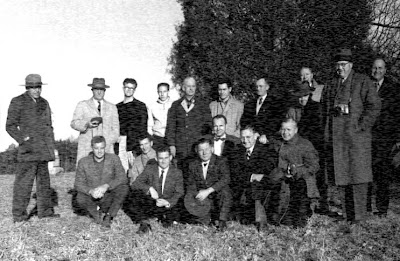 Park Historian Ralph Happel (at left) in 1957 with a visiting group
of the Civil War Round Table from Franklin, Virginia.
The picture was taken at the Bloody Angle, Spotsylvania,
on November 10. Image from the collection of F&SNMP.
Posted by John Cummings at 3:15 PM