The Landscape of War - Spotsylvania Courthouse

Note: the pictures in these blog posts are clickable which provides a larger view.
The following images illustrate an engagement on the approach to Spotsylvania Courthouse, today’s Route 208. The top sketch was drawn by renowned newspaper artist Alfred Waud and is dated May 9, 1864. It shows what is most likely an early afternoon encounter. In the foreground, Union infantrymen of the IX Corps advance across an open field toward a thicket of “drawf pine” where concealed Confederates fire on the blue line. The ground behind begins to rise toward the Courthouse and the main Confederate entrenchment. 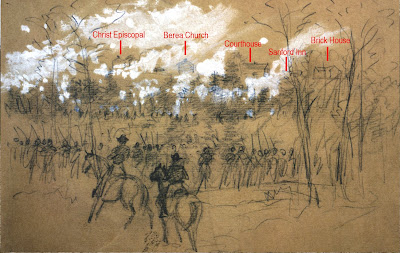 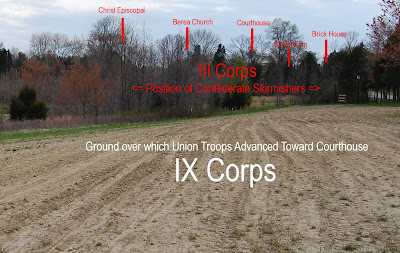 Across the horizon line are five of the structures that constituted the bulk of the village at Spotsylvania Court House in 1864. Four still stand today. I have annotated the Waud sketch and the accompanying modern view to help orient the reader.
This encounter provided nothing of significance toward the final outcome of the campaign and it was a prime example of IX Corps commander Burnside’s inability to contribute effectively towards an operation’s objectives. At the time, the IX Corps was functioning as an independent command, moving in unison with the Army of the Potomac. It should be noted that the Confederate command was amazed that the Union forces did not exploit at this time their own admitted weakness along this point in their line.
Waud’s location from which he worked was on the south side of the road, approximately 670 yards from the Courthouse. He is looking southwest near 231 degrees. The Confederate skirmishers were positioned about 218 yards in his front, along a line that follows close to the same base as Confederate Cemetery Drive today. Directly south of Waud’s position is a dug pond which is not an historic feature of the property during the Civil War.

The aerial photograph below has been annotated to again identify the locations of the structures seen on the horizon of Waud’s on location sketch. 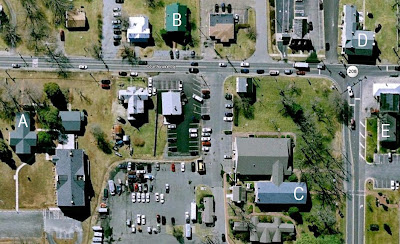 A: Christ Episcopal Church, which during the Civil War was rectangular. The cross section present today is a modern addition.
B: Berea Church: Now home of the Spotsylvania County Museum.
C: The original Spotsylvania Courthouse of the Civil War era.
D: Sanford Inn: Former tavern and hotel now used as law offices. The roofline is barely visible in this sketch but its location is unmistakable between the Courthouse and the Brick House to its right.
E: Brick House: The one structure that no longer stands from Waud’s sketch. In May 1864 this home was owned by Joseph Sanford, owner of the Inn. The home burned on July 13, 1930 while the residence of Commonwealth Attorney S. P. Powell. It had a distinct L shape which is clearly visible in the drawing.

Waud’s sketch is in the collection of the Library of Congress.
Posted by John Cummings at 9:45 PM

Wow, talk about research. I love reading about history and the hows and the where's - but mostly the why's. Thanks for an interesting and educating post. Plant and Garden Blog

Another wonderfully precise layering of event with place then and place now. Thanks as always for sharing your knowledge, John. Noel

John,
I have enjoyed your writing and research about Spotsy. I especially enjoyed the information on my 3rd Great-Grandfather, Joseph L. Sanford. I have tried to contact you to see if you have a photo of him or his children at Sanford's Tavern or the Brick house. I live in Bowling Green, Caroline County and would love to meet you and share with you a wonderful piece of history I posess from this family line of mine. I am in the phone book!
Thank you,
Tina Gambill