I've been taking a closer look at "A Harvest of Death". In a previous post I have indicated there are visual clues that lead me to believe the distant tree line in this image has been created in an effort to salvage an otherwise poor photograph. This suggestion has caused a stir amongst those who are looking to solve and/or disprove multiple theories as to its actual location on the battlefield.

Here is the image from Gardner's Sketchbook. 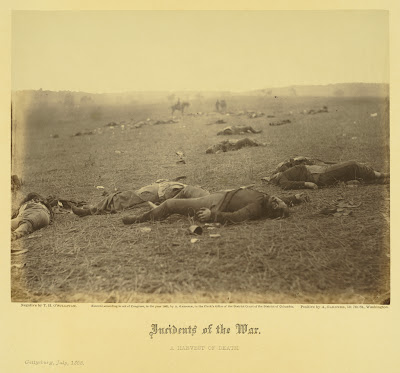 Let's look below at another copy, this time from the
collection of the Johnson Museum of Art at Cornell University.
What do we see, and what do we not see? 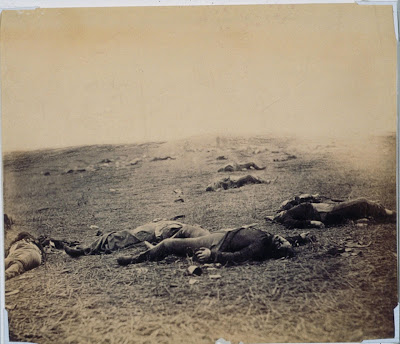 The entire upper third of this most famous of Gettysburg images looks to be
a contrivance by Gardner to create an artistic and poignant print to sell.
No tree line, and no shadowy figures in the distance. Gardner has begun
to create the illusion in the print we have long accepted as fact. Note the
pencil shading within the left and right horizon line. This pencil shading smooths
out in the final published prints of this image. Click on it for larger viewing.
(Gift of Arthur, Class of 1956, and Marilyn Penn, Class of 1956, Christopher Elliman, David Elliman, and Andrea Branch, by exchange, and through the Overton Endowment Fund. Photography courtesy of the Herbert F. Johnson Museum of Art, Cornell University.) Link here for collection. 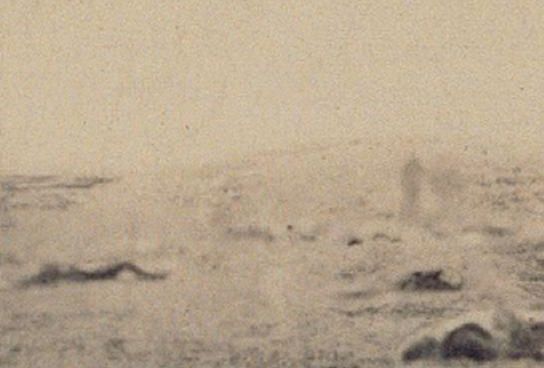 This enlargement shows the beginnings of the smears that would become the "standing"
figures on the right. Note also the darkening of features on the scattered bodies for contrast.
See below for the end result from the Gardner's Sketchbook Plate # 36. 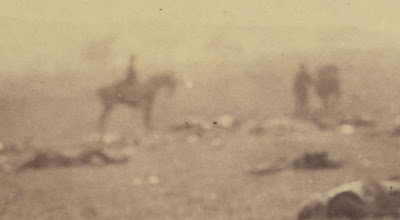 Notice how in the finished product these silhouettes don't match the luminescence of
the surrounding figures. They have no three-dimensional qualities when compared to the
bodies on the ground. They are created from pencil, and India Ink wash. They are a work of art. 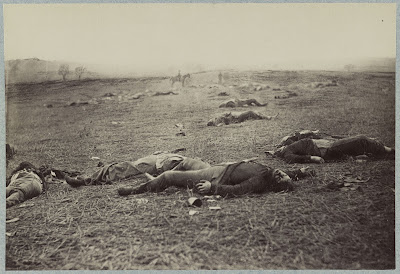 Here is another "working copy" so to speak from the Library of Congress.
Note the exact same pencil shading on the ground at left and right, and
a very crudely drawn "rider on a horse". The false tree line is beginning
to take shape as well. I have located what Gardner may have likely referenced
to create the man on the horse, in an earlier photograph of his own, as seen below.
A strong resemblance when compared to the finished product. 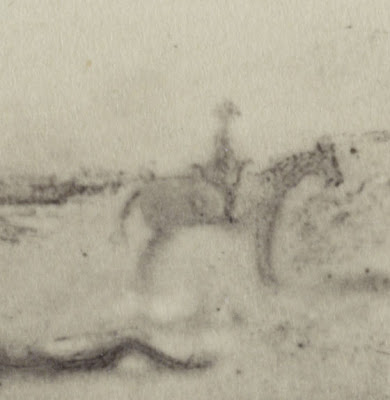 From the Library of Congress, the initial rough sketching that would lead to the finished product below. Retouching and rephotographing would produce the famous photograph we have known. 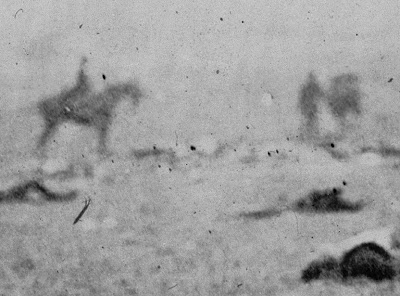 In this detailed enlargement from another copy of the Sketchbook print, it is easy to see the contrast
difference, and how the figures are actually out of scale to the "real" bodies. The inking of the shadows is quite apparent here also. For nearly 150 years we have taken this photograph as real in all regards. Now it can be seen to be as fake as the moved body in the "sharpshooter's lair" in Devil's Den. A manipulation of a bad negative to yield a marketable work of art to tug the heart strings.
Click on the picture above and get a better view of the brush strokes that make up the riding figure.

Posted by John Cummings at 3:34 PM

I have no dog in this fight, but I will say what you have presented is fascinating stuff. I look forward to watching how the world reacts, as it invariably does about anything that rattles the conventional wisdom about Gettysburg.

Hi John - You have presented some really fascinating stuff with this theory - a theory that I am very excited to explore further - but I have to tell you that I don't think the images of the background figures were doctored. Being an artist myself and having studied these photos for many years under intense magnification, I am convinced that the rider on horseback and the standing figures are indeed part of the original background image. Here is why I say this,

1. The image that you say is made by pencil and india Ink Wash wash shows absolutely no signs under magnification in my opinion of having this done. Now, the other images however were definitely doctored up with pencil and this is obvious but I don't believe this was done by Gardner. I think this was done by someone else way after on a copy of the image and this type of doctoring is common among many copies of Civil War photographs, especially in Soldier portraits. Also I Just don't believe the technology was available at the time to create such an image that didn't show obvious signs of being doctored and I don't see that with this image. In order to create an illusion like this you would have to cut out an image from another photo and then somehow create a "mock-up mechanical" in order to imprint the image on the glass negative in order to get the same Background "noise" level you see in these images. I just don't see it here.

2. The theory you advance about the standing figures not having the same dimension/contrast as the bodies is easily explained by the fact that the standing figures are not only the furthest figures from the camera and thus would have much less detail but also the fact that they are standing and not reflecting the sunlight in the same manor as a body laying flat on the ground. Standing figures would be affected by atmospheric conditions differently and would appear different than those laying on the ground. Sorry, but I don't believe these are contrivances of an Artist. I also don't see why Gardner would have felt compelled to add such figures in the background in this manor as I don't know of any other instance where he would have altered the image to create such effects in other photos. We also know there was a burial detail in the area from the companion photos taken in this serries form the opposite angle.

3. The Albumen print you mentioned from the Overton Endowment Fund, You have to remember that Albumens are copies of copies in most cases and things can be easily deleted out of them and feint background detail can easily be lost in each generation of copies. I have seen many Albumen prints that have had background detail removed or Ghosted out of them from the original negatives or from CDV's of the same images. I really don't think this was a 'Contrivance" but rather, I believe it was just a copy with a deleted or faded out background with some detail removed.

4. The "working copy" from the LOC shows Obvious signs of being doctored with Pencil but again I believe this was done by someone other than Gardner (Probably way after the war) and is also a copy of a copy as much of the background detail is faded out.

I look forward to more of your postings on this theory but on this one I felt like I had to chime-in and give my opinion as an Artist who has dealt with and studied Civil war Photography for many years. I just don't see these as being doctored as you have presented.

Mark,
I appreciate your time and interest, but I will continue to stand behind my theory. Without going into great detail, something I will cover in a future post, the copy print process, and build up of "repaired" elements of the image is evident. One of the most telling pieces is that the standing figures next to the mounted figure are clearly derived from smudges seen in one of the other prints. Adding to it the fact that they are out of scale to the other figures on the ground. Adding this to the clear false tree line, created by over burning, and further enhancement, this image has been the point of contention that detractors fall back on when arguing their dismissal of my work.

Accepting the unexpected is the key to settling this debate. 150 years of of believing what we think we see attests to Gardner's (or an associate's) skills at rendering a defective negative into a marketable and truly iconic image.