Retraction - Enlargement of Gettysburg Image? Not this time...

Despite appearances, further scrutiny has shown that this image from Gardner's Photographic Sketch Book of the War, Plate 36, is not an enlarged print of the left half of the stereo negative as seen below it. The error, stated here in the now edited, prior post, was heavily based on the assumption that Gardner and crew would have had to actually change out cameras to produce each format. What is now more clear is that Gardner's "field camera" had to have been fitted with an interchangeable lens board that could switch from the duel stereo lenses, to the single lens for a full plate image on 8" X 10" in contrast to the 4" X 10" of the stereo negatives. This interchangeable camera would have also required a removable "septum" that divided the images when set up for use with stereo lenses. Most stereo cameras of the mid 19th century were manufactured as dedicated stereo format.
By easily switching out the lens board at the front of the camera, the relative framing of the subject matter would have remained the same, only this time with a centered optical axis that would rest between the duel axes of the stereo lens pair. The resultant images are deceptively similar, and in most cases examined, have some very slight changes in the placement of some objects, primarily in the distance, outside of the field of focus. The clincher in the two images below rests in the two trees in the upper right. This does not preclude that there were no enlargements made from stereo negative in other cases, but here, as believed and stated before, it is not the case.
This does not alter the conclusions of other postings regarding this series of Gardner images, particularly the material presented with the "Harvest of Death" image and its obvious doctoring of the upper third of the image, as presented in the prior post as well. 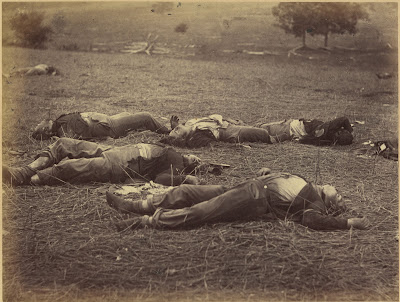 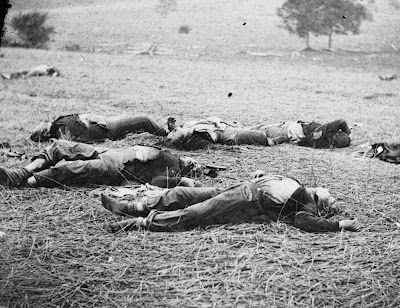 The photograph below, taken in May 1864 in Fredericksburg, shows what appears to be a lens board for one of the interchangeable cameras, in the lower right foreground. 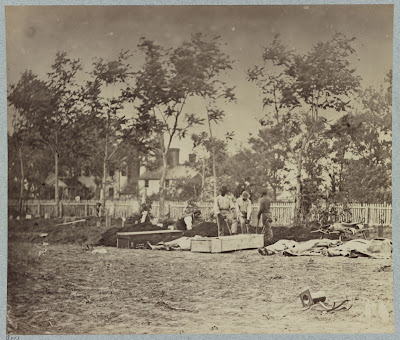 To illustrate an interchangeable lens board camera, I am providing a link to another website that shows a reproduction wet plate camera based on one manufactured in the 1870s, after the Civil War. It does however demonstrate a similar arrangement to what Gardner and crew would have had to use for the process of taking both stereo and full plate images from a fixed position without producing easily discernable changes in the stationary subject matter of the photographs.

Posted by John Cummings at 8:07 AM