Worth A Thousand Words - An Image of Development 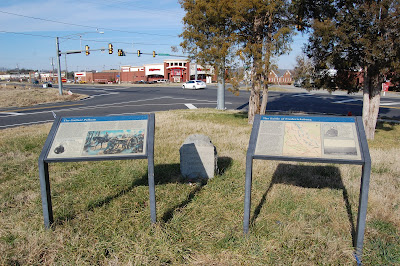 This simple stone marker was placed in 1903 by former Confederate staff officer James Power Smith. It marks the location of famed Major John Pelham's daring action, with a single cannon, against advancing Federal forces during the battle of Fredericksburg. The stone once stood more directly placed, along the road, facing the other direction, until moved further into this corner lot due to development pressures. Seen across the intersection is the ground over which the Federal advance came, as well as the challenging fire of over two dozen Union cannon. Pelham and his gun crew held this position for over an hour before finally withdrawing when ammunition was running out. 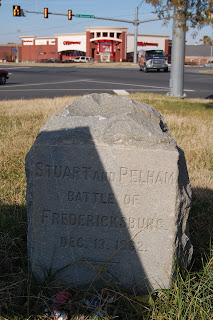 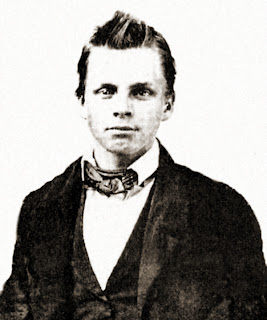 The portrait of John Pelham at right was taken when he was 16. He was barely three months into his 24th year during the battle of Fredericksburg. Three months later he was mortally wounded at the Battle of Kelly's Ford, Virginia, on March 17, 1863. His body was returned to his home state of Alabama and is buried in the Jacksonville City Cemetery. 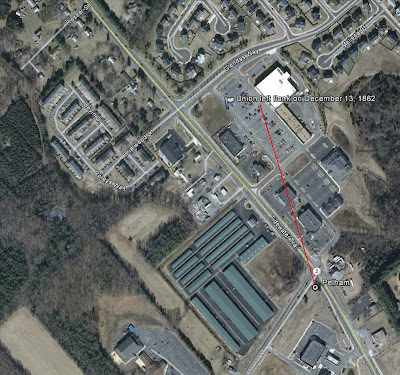 Click map to enlarge for greater detail.
The aerial map above shows the Pelham marker site (bottom right) as it sits today among residential and commercial development. The red line indicates the direction of fire from Pelham's cannon as the Union advance of thousands of infantry swept toward the Old Richmond Stage Road, modern day Tidewater Trail, Route 2. Union artillery, situated near the large, white roofed building, returned fire, unable to dislodge the Confederate nuisance. The one acre strip of land running southwest of the marker has been preserved by the Central Virginia Battlefields Trust since 2007. As of this writing, the larger commercial building below the marker sits vacant, the victim of direct competition from rival businesses across the street, directly in the line of Pelham's fire.

Posted by John Cummings at 9:17 PM

There is suppose to be an earthwork, Ft Hood I believe, in that general area, right?

Yes, Fort Hood, also known as the Talcott Battery, is roughly half a mile, slightly northeast, of the Pelham marker, above a bend in the Rappahannock River. It had been built in November 1862 to help prevent Union ships from coming up the river toward Fredericksburg. The guns there never engaged for that purpose, however they were temporarily captured by Union infantry on December 13, 1862, but never hauled away, thus reverting back to Confederate control. There is a Virginia Historical Highway Marker at the Pelham marker site which describes the fort. The actual site of the fort is on private property and not accessible to the public.

It's one of the hazards of getting older, that you're constantly surprised at development. I remember over many years coming to Fredericksburg and there was very little around the Pelham monument other than one small, older house.

I drive past it twice a day, every day, and I always take notice. Thanks for another great post about our neck of the woods.

I've visited that spot several times, and for whatever reason, on the fourth or fifth visit the surrounding development (particularly the mini-mall named "Pelham's Corner") really made me angry. I frequently give presentations on my books and, with it, historic preservation, and I always tell the story of Pelham's corner, then show that picture of the mall sign with the 7-Eleven on it. It always gets a strong reaction.