Fox House Below The North Anna: The front has always been the front. Concern raised as restoration work nears.

Last May the Emerging Civil War blog published a piece about the American Battlefield Trust's acquisition of the Fox House, a vital landmark of the North Anna Campaign, and location of a near fatal blow to Robert E. Lee himself. In that article there was raised the question as to which face of the house, east or west, was the 1860's entrance. The answer to that question is easily established, yet a few days ago, May 23, 2020, ECW posted an on-site video, now revised as of 5/28/2020), with co-founder and editor-in-chief, Chris Mackowski, wherein he presents the west face of the house as being the wartime entrance, maintaining that this was due to the wartime placement of the Telegraph Road being some 250 yards distant, Mackowski further maintains that the entrance was switched to the east face with the 1926 opening of modern U. S. Route 1, alternately known as the Jefferson Davis Highway, and Washington Highway. This assertion does not bear up under scrutiny. There are two major points to be brought forth here.

Point 1: When built in the mid to late 1830's, the front of the house was oriented toward the newly opened (1836) Richmond, Fredericksburg and Potomac Railroad, which took dominance over the Telegraph Road as the anticipated route of burgeoning commerce. It also didn't hurt that facing east provided morning sun and added warmth during winter months. This trended into the mid 19th century.

Point 2: The incident of General Robert E. Lee's near brush with death on May 23, shortly after 5:00 PM, left physical evidence on the left door frame of the east face entrance way. The story places the general on the porch, receiving a cold glass of buttermilk from the home's owner, Reverend Fox, just as a Union artillery shell hits the frame and fails to explode. A photograph of that battle damaged wood, taken by me in 1992, can be seen below, at center, along the edge of the brick wall. 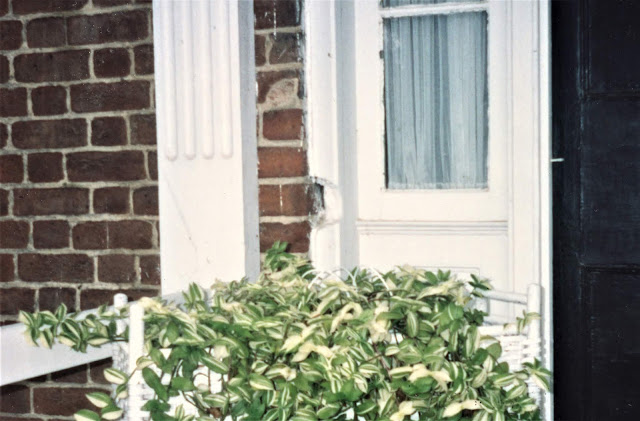 I'm confident the Trust is aware of the Fox House entrance being on the east side rather than the alternate story initially detailed in the ECW video.
From the ECW video it is apparent the Trust has the door and frame protected by a boxed enclosure, not only as a security measure, but one to also protect the battle-scarred woodwork.

Additional images of the Fox House are included below, taken in 1992 while touring with Blue & Gray Magazine editor, Dave Roth, and North Anna battle expert, J. Michael Miller, author of the seminal volume, The North Anna Campaign "Even To Hell Itself", published in 1989 by H. E. Howard. Our visit was in preparation for Miller's cover article for the April 1993 issue of Blue & Gray. 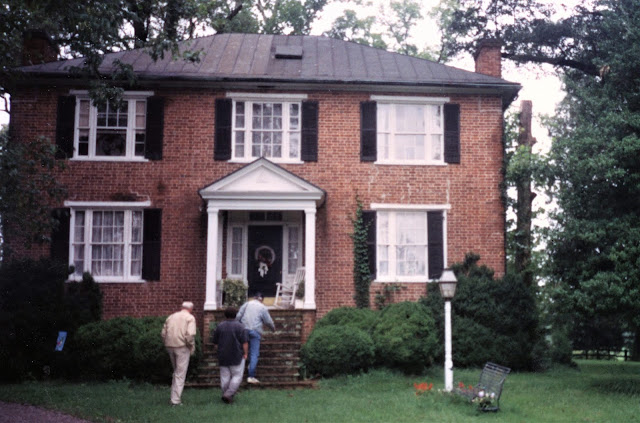 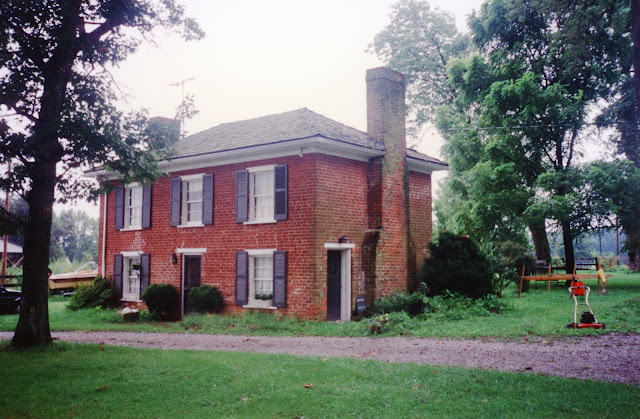 To the left of the house (south) stands the former library and school maintained by Reverend Fox. 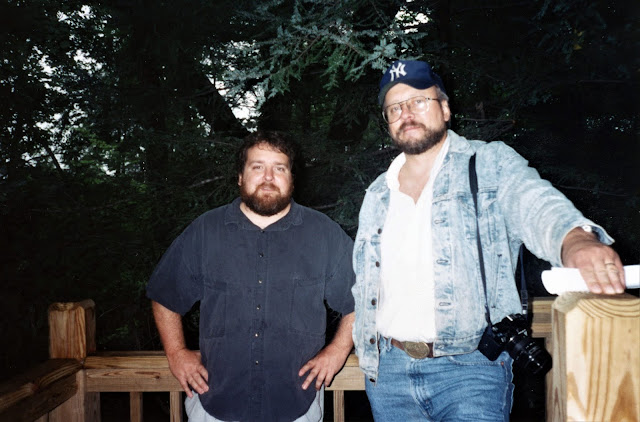 Later in the day, J. Michael Miller and David Roth posed along the newly built North Anna Battlefield Park trail system, near where Colonel Chandler of the 57th Massachusetts Infantry was mortally wounded on May 24, 1864. 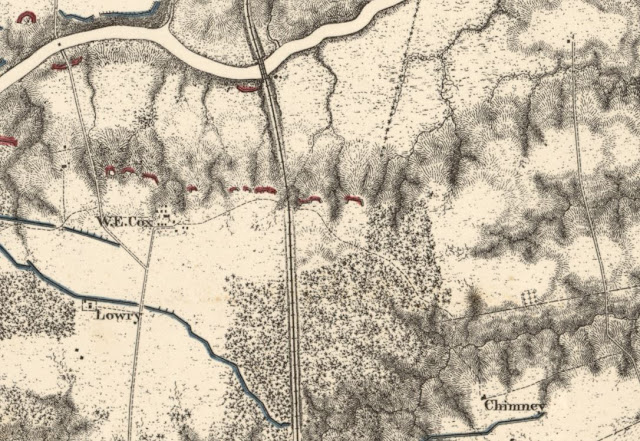 A detail from Nathaniel Michler's map of the North Anna Battlefield shows the RF&P running north to south at center, with the Fox house, mislabeled "Cox",  at center left, with the Telegraph Road to its west. The long entrance road to the Fox house approaches from the railroad. Modern day Route 1 would bisect the property in 1926. 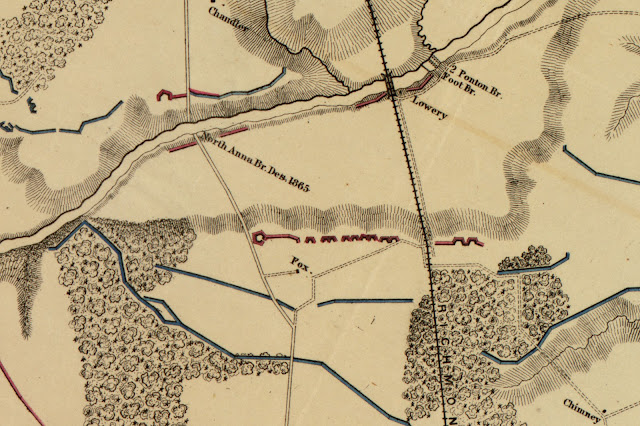 A detail from the J. C. Duane map of the North Anna Battlefield, although distorted as for the course of the river, it does provide greater detail of the road leading from the RF&P to the Fox House.

Posted by John Cummings at 1:02 PM

Hi John,
Confirming your analysis of the Fox house. The east-facing side has always been the front of the house. According to "Old Homes of Hanover County" there used to be a two-story, columned porch across the entire length of the east side, but that is long gone. When I took a group there last fall the renovation work had not started and and the damage to the east-facing door frame was still apparent. I have no explanation for why it was built with its rear (west-facing side) facing the old Telegraph Road. I have a picture of it with the front porch, will send it to you via email.

The information originally presented in the video was given to me by the former owners of the house. The video has been updated to reflect your additional info.

A picture of the house with the portico can be found here:
https://emergingcivilwar.com/2019/05/23/the-fox-house-at-the-north-anna-river/