Next month, on November 18, I will mark the fourth anniversary of my investigations into the Harvest of Death/Field Where General Reynolds Fell photos. My adventure began as support to the work of historian Scott Hartwig who had published his findings initially on the Gettysburg, NPS Blog, and later in the magazine, Civil War Times. Hartwig's work was immediately met with resistance by Garry Adelman of the Center For Civil War Photography. Adelman's position was that William A. Frassanito had discounted the site years before. Adelman proceeded to produce a thirteen part dissection of where the Harvest of Death was not, demonstrating numerous past proposals by himself and other investigators, include Mr. Hartwig and my own. That series appeared over several months on the Gettysburg Daily Blog. The episodes concerning my work were filmed on February 5 and 15 of 2012, but were not posted until May, months after my continuing work had been adjusted and fine tuned. Nowhere in this time (or since) was Mr. Adelman welcoming to my offers of meeting with him and actually presenting my material in person, something that I had assumed courtesy would permit. Thus, when posted, Adelman's refutations of my work featured a site long out of line with the ground I had settled on, and he has since adamantly stated that the true location will "never be found". Certain circles consider Mr. Adelman's word to be sacrosanct. This has recently led others to offer wide ranging proposals of the "true" location of the Harvest of Death, making it the obsessively desired, "Tut's Tomb", of Civil War photography.

The foundation of my work has always been based on what I have stated to be a long visible clue in the upper right hand corner of Timothy O'Sullivan's exposure, titled by Gardner, "Field where General Reynolds Fell". It has been consistently my assertion, over many blog postings and other writings, that the features on the horizon are the Thompson House, and the Dustman House. The Dustman House no longer stands, but appears in other photographs, so we know what it looked like, and we know exactly where it stood. The Thompson House, of course, remains today as the site of Lee's Headquarters, on Chambersburg Pike, and is soon to be restored by the Civil War Trust.

I will not repeat my previous material, as it stands on its own and is easily found by searching this blog, but I will present two brief videos made after a recent return trip to the site on September 25th. Here I demonstrate, using overlays, that the landscape just east of the Reynolds death marker, along Reynolds Avenue, is, clearly, the location of the bodies seen in the July 1863 images.

What I continue to find sad about the deniers of this site, is that when I visited the location on the 150th anniversary of Gardner's team's visit, my wife and I, and fellow blogger Scott Manning, were the only people there to recognize the dead and the ground they fell on. Scott's coverage of that day can be found here. This is what we do our research for in the end, so that these honored dead can be appreciably recognized for where they fought and died, and hopefully we can achieve a better understand of the battlefield.

Below, the first video shows the full, left hand side of Timothy O'Sullivan's stereo negative, with my toggling back and forth between the period and modern images, pointing out important features.
View the videos in full screen.


Below, I have zoomed in for a closer view of the horizon features as well as the contoured land between. As mention in the previous video, James Anderson stands in the modern image along the location of the northern fence that enclosed the "Field Where General Reynolds Fell".

Below, are three progressive views of the overlay used in the videos. 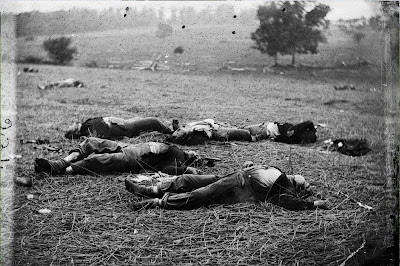 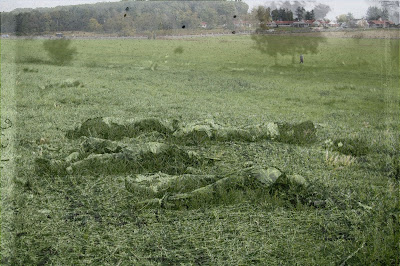 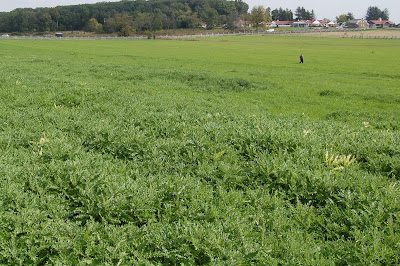 Below, my October 2012 map of the camera's field of view, indicated in bright green. 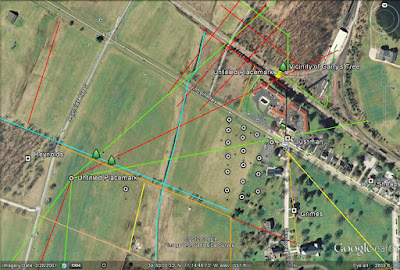 Below, a close up of the area where the northern fence enclosed the field.
The beginning and ending points of the path taken by James Anderson for
the September 25, 2015 photo used in the overlay video, are marked "A" and "B".
The approximate point at which he is stopped along the way is marked by "J"
This image is not made from the above map, and shows notation lines of other points
not discussed in this presentation. 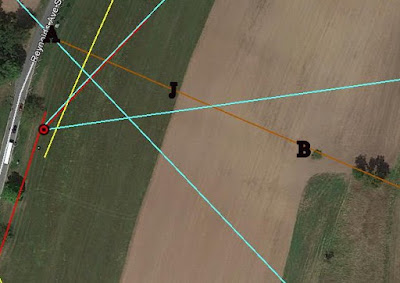 For four years I have not wavered in my assertion we are seeing the Thompson House on the horizon. It is the vital clue to anchoring the location. The evidence speaks for itself.

ADDED
Since last night's posting, I am adding these of the opposite view for those who have not read my previous material. Please, examine my numerous prior posts, Enter "Harvest of Death"in the search box near the top of the right hand column. There is plenty to see. 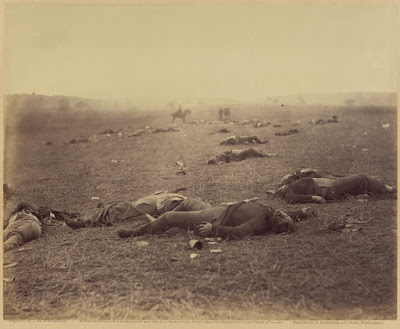 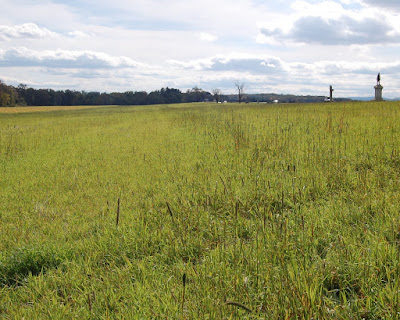 Posted by John Cummings at 5:59 PM

John, keep up the good work. Its difficult when you challenge the accepted story. Even when you are right most people dont want to admit it.
Wish you luck.

John, You will never be able to convince the main naysayers because their enormous egos block their rational thought processes. Keep up the great work!!

At least it conform a Gardner caption "..Field where General Reynolds was killed..' or more strickey speaking a field near where Reynold was killed