For those who know the Spotsylvania battlefield well, the following picture might be a surprise if you haven't been recently. The wood bridge that spanned the Confederate works at the Bloody Angle for many years has been removed in the latest of the long planned efforts at scene restoration and interpretive improvements. Presently it gives new visitors the impression it is a trail across the works. My first observation of a random tourist witnessed a man on the south side of the trench, as seen here, stopping at the area of the concrete "stump" block, turning north, seeing the monuments and proceeding across to read them in detail, then proceeding along the trail on the north side of the works to the new bridge built in June and July 2010. Hopefully it will take only a brief time to get grass growing back over the area covered by the bridge for years. That, and the additional placement of a "Please Keep Off The Trenches" sign will, or should, do the trick. Hopefully. 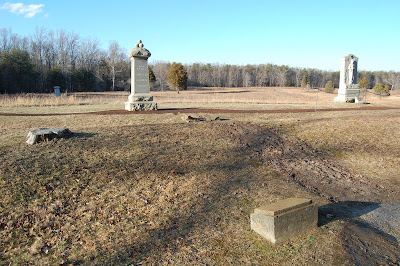 As seen below, the view on the approach from the parking lot is pleasantly uninterrupted with the bridge gone. It does however lack immediate interpretive signage to inform the uninitiated that they are in fact at the "Bloody Angle", one of America's most important landscape features. 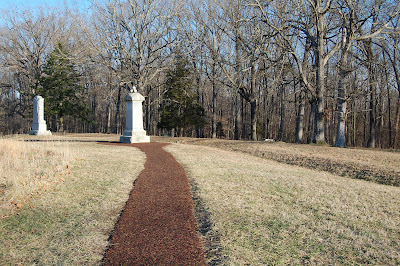 The view below shows the former bridge site from the monuments, looking southward. Note the  remaining stones that held the structure off the ground on the north side. I would imagine the stones will be removed in the new future. Perhaps the work crew was hesitant to remove them initially, not knowing if they had a cultural resource importance. 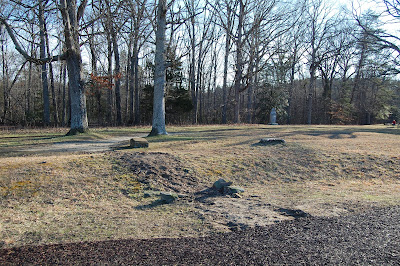 Now, the thing that still puzzles me with the new signs is their distance from the actual "Bloody Angle" and site of the fabled 22" Oak Tree. The monuments are essentially in front of the Bloody Angle but nothing makes this clear from the sign, nor does the aforementioned concrete "stump" block get any mention. There is a photograph showing the original stump in the Smithsonian, but there is nothing that indicates that the concrete block stands at its site based on oral tradition and a pre-park stake hammered in the ground on the same spot. 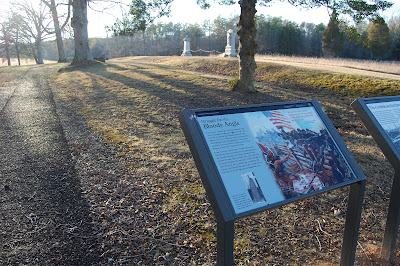 Below, a 1921 photograph of Lynwood Landrum, standing next to the stump site. The 15th New Jersey monument is seen at left, surrounded by a long removed iron fence.
From the author's collection. 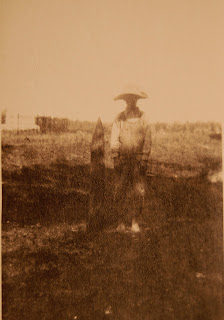 The placement of an additional sign, perhaps similar to this one, may help deter visitors from walking over the Bloody Angle. 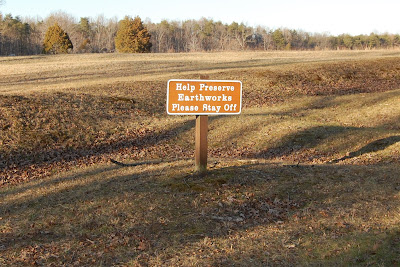 For now the path looks inviting and intentional, as seen a few days ago, below. 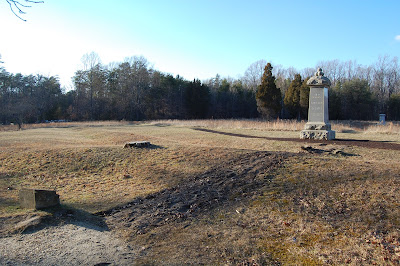 The view below is from the early 1930s when the C.C.C. was building the park road, now removed.
Note the extreme grade that was cut to allow for building of the road with compacted crushed rock. 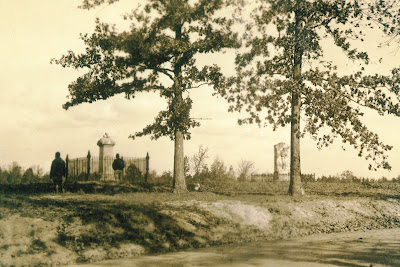 Another view from the 1930s shows the Ranger Contact station that stood at the Bloody Angle up until the Civil War Centennial when the current interpretive "shelter" was built near the park entrance on Grant Drive at Brock Road. The concrete "stump" block is at left of front center. This and the previous image are from the archives of the Fredericksburg and Spotsylvania National Military Park. 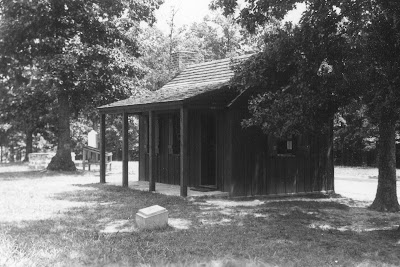 interesting pix...especially the last one!

I had not noticed even though I was there recently... but I hope it works out.

There is already a cut-through on the path leading from the parking lot to the former bridge - the cut through is the left of a couple of interpretive signs a few feet from the first sign (showing the shape of the mule-shoe.

your last post that showed the muleshoe outline in an aerial photo is much better than the NPS graphic...

it really shows the reason why commanders thought it was a bad configuration...

I might take a ride down to Spotsylvania this weekend. Haven't been there for years. Need to pay respects to the boys of the 126th OVI.