This is of course a continuation of my study of the Gettysburg, after battle images which are now collectively known as the "Harvest of Death Series" as they are of the same bodies of Union dead, photographed from near opposite directions, a fact originally published by William A. Frassanito in 1975's groundbreaking work, Gettysburg A Journey In Time. "Harvest of Death" is derived from the caption given by Alexander Gardner to the image looking southward, examined in previous posts here on this blog. See the more detailed and all inclusive posting by clicking here.
Below is the left side of the O'Sullivan stereo pair looking slightly northeast, annotated to compare locations of four key horizon elements in the matching of my then and now images. (A) being the Thompson House, aka "Lee's Headquarters" (B) the faint trace of the Chambersburg Pike, just below the letter, and seeming to jut out from behind the foliage of the large tree. This detail is slightly crisper in the Gibson exposure of nearly the same angle. (C) a lone tree that appears to sit on the south side of the Pike. (D) the extreme left edge of the open field on the north side of the unfinished Oak Ridge Railroad Cut, seen as a whiter strip between the darker trees, and the perceptibly darker field on the south side of the cut.
Click on this, and all images in this post, for larger viewing.
﻿ 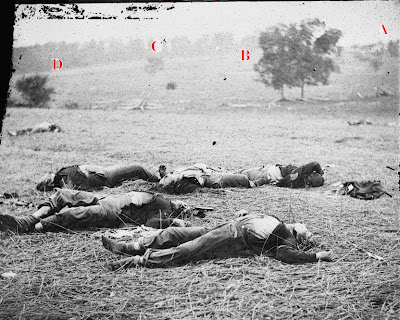 Below, the approximate same position today with the main elements of the O'Sullivan exposure superimposed over top, and the same four key horizon elements annotated. The open field for (D) is today obscured by mature tree growth on both the former field and the south edge of the rail cut, as well as by the buildings of the twentieth century motel, "Quality Inn at General Lee's Headquarters." 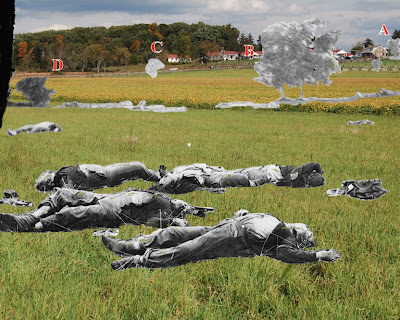 Below, an artificially created demonstration of the effect of the lack of "depth of field"
on objects in the distance when focus is on the foreground subject matter. Any
suggestion that "fence posts" should be visible along the Pike is ridiculous for this image.
An additional complaint, by detractors of this material, suggests that the Thompson House
should appears darker in the period image if it is indeed the Thompson House.
This gray scale copy of the above color image demonstrates that that is also an absurd assertion. 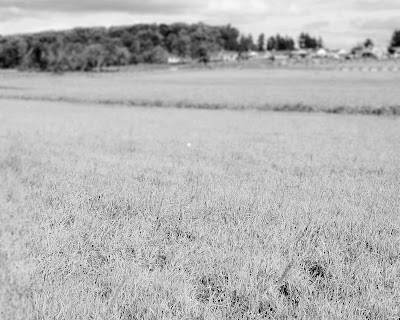 Below, the left half of Gibson's stereo pair with (B) annotating the
Chambersburg Pike below it, emerging from behind the large tree's foliage. Very
possible indications of fence posts are visible here under magnification. This
image has slightly more "depth of field", and is a bit stronger in contrast than O'Sullivan's,
but it is still not as detailed as other images taken elsewhere around Gettysburg in 1863. 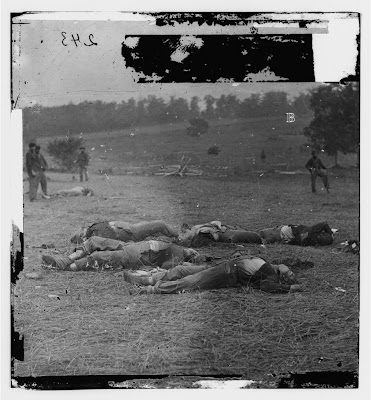 The sad thing about the ongoing debate with detractors on this subject matter is that this location was initially suggested by a man named John Stewart in 1999 and dismissed by William Frassanito. Stewart's comparison was made at too great a distance from the Chambersburg Pike and an overlay comparison appeared spurious. In 2011, Scott Hartwig independently suggested the same near location, but was again plagued by a miscalculation of the distance between where the bodies were to the Chambersburg Pike. My examinations, first begun in late 2011, were to be made as supporting material for Mr. Hartwig's study, and focused on the previously undetected Thompson House in the right distance of the O'Sullivan exposure. This was my initial contribution to the brew. It was at this time that Garry Adelman of the self-styled "Center for Civil War Photography" pounced heavily on against this suggestion (seemingly out of rapt devotion to the opinion of Frassanito), and produced a thirteen part series on the now dormant "Gettysburg Daily" blog site. When dealing with my material, Garry focused heavily on my earliest, and quickly obsolete postings, filming in February, videos that would not appear on Gettysburg Daily until May. My research had remained fluid and was openly posted during that time on this blog,  and I was continually adjusting my location on the field to correct what remained a somewhat elusive camera position for Gardner and crew, although I was convinced that it was in the immediate area. In the late summer of 2012, I had at last found what proved to be the site that clearly worked in either direction for both "The Field Where Reynolds Fell" and "A Harvest of Death". All along, the same general view as first suggested by John Stewart, but in the end, nearly 200 yards further north along the park road, Reynolds Avenue, and in the end roughly 123 yards west of my initial focus.
Mr. Adelman continues to the present day to deny that the location of these historically important images has been found, claiming them as still "unknown" and open to discovery.

Let me state that I hold the Center for Civil War Photography in high regard, and it is composed of a great group of warm and generous people, all with a focused passion for the subject matter. The work they do is invaluable and there annual seminars are inspirational. Garry Adelman, as a founding member of that group, and an indefatigable historian, is a genuine pleasure to associate with and his exuberant manner is endearing to all who meet him. We are just divided on this matter at hand. I look forward to the day we can agree on it. Right now it's like history held hostage.

Below, based on a suggestion after the initial publishing of this post, are approximate then and now of what I suggest could very likely be fence posts along the Chambersburg Pike from the Gibson image and my detail overlay from above. The angled arrow points to the area that juts out from the foliage of the large tree, a very similar appearance today.

There is also worth noting, a thin, dark line that further accents the division of the two sides of the railroad cut, probably a shadow effect of the south side against the north side, thus the line delineates the actual "ditch" of the cut. This view also makes significantly clearer the wood line on the far edge of the lighter toned field, which is today covered with mature trees. The south side of the cut is today, as previously stated, now obscured by trees and the motel buildings.

I believe I see 9 buttons on one of them, and sorta see piping on sleeves.. Iron Brigade only ones I known of that are documented to have worn them as a unit. might be a clue.