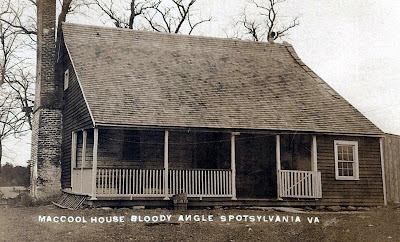 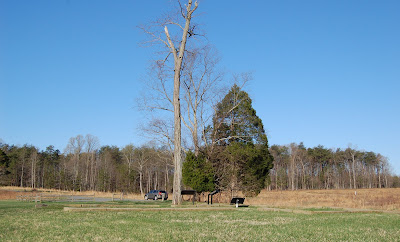 The home of Neil McCoull stood in the center of the Muleshoe Salient throughout the battle of Spotsylvania. It served as a military headquarters for Confederate Corps commander Richard Ewell. During the fighting the McCoull family cowered in the basement. The home was repeatedly struck by small arms fire and artillery rounds, but it managed to survive relatively intact. Nearby outbuildings served as makeshift hospitals for wounded men streaming toward the rear of the fighting.

At top is what’s known as a “real photo postcard’ popular in the first half of the twentieth century, and very collectable today. This particular image dates to after 1900 for it was sometime that year that the “north” chimney of the house pulled away from the structure and collapsed. The image also dates to before July 17, 1921 when the structure caught fire and was completely consumed. Here we are looking at the east face, which served as the rear of the house. Here, the south chimney stands intact and remained standing after the fire. Visible at the right end of the roof peak is a metal stove pipe that serviced after the collapse of the north chimney. It was sparks emitting from this pipe that ignited the wooden roof and led to the final demise of this landmark. In 1939, the National Park Service conducted an extensive archaeological survey of the ruins, and along with other collected data considered rebuilding the McCoull house to serve as a caretaker’s residence and control center for the Spotsylvania Park. The unfortunate start of the Second World War precluded the effort. The open fields surrounding the house site served as a Civilian Conservation Corps camp during the depression. It was known as "Camp Bloody Angle, MP-1".

Today, the cellar hole has been filled in, protecting the resource and making the site safely accessible to visitors. A pile of debris from the south chimney remains as the only surface evidence of the original building. Heavy, rectangular stones has been placed over the outline of the house foundation to give an indication of its size. The modern view was made looking west at 8:32 AM, March 31, 2010.
Posted by John Cummings at 2:44 PM

Hi John. I just found your blog. I'm glad to see you are sharing your immense knowledge of the Spotsylvania Campaign with the world! Hope to see you soon!
- Todd Berkoff
Arlington, VA

Hello Todd,
I appreciate your comment and I'm glad you stopped by. Let me know how your schedule is looking here before the foliage gets too thick, as we need to catch up on the field recon. Please extend the invite to Charles as well.

I have been a resident of Spotsy for over 15 years. I love history and the civil war.

I used to live in South Oaks, the sub division directly behind Massaponax Church. My Wife used to live in Lake Wilderness and at the edge of her back yard was the start of the federally protected battle field land, infact you can see what looks to be worn trenches from the windows in the back of the house.

Anyway I found this blog and love it. I don't know a lot of the history of the area other than what is written in the history books given to you in High school. I love the Then & Now sections please keep them up.

I haven't in all these years made a trip around the battle fields, but I really need to.

Toby,
Thank you for following the blog. The "Then and Now" research is something I love to do, and have pursued heavily over the past eleven years since moving here. My long standing inspiration comes from a book titled "Gettysburg: A Journey In Time" by William Frassanito. It came out in 1975 when I was a teenager. I am fascinated with the juxtaposition of space and time.
I will be posting many more of the comparison images as I go along here.