Notice: The correct location of this house has been found.
See our July 24, 2016 posting.
Additional update on August 15, 2016 posting.

A follow-up on the date, and location of General McClellan's visit with General Morell on Minor's Hill. According to D. Mark Katz's, Witness To An Era, The Life and Photography of Alexander Gardner, the group portrait of the General-in-Chief and accompanying officers, was copyrighted by Matthew Brady on January 6, 1862. This makes the date the image was made somewhere in the area of three months earlier than initially suspected. Katz's information was derived from the United States Copyright Book, 1861-1868, achieved in the Library of Congress. As for the precise location of the tower, I have still not had time to put boots on the ground, but based on USGS topographic maps, this is the physical summit of Minor's Hill. Logic would put the tower on or near the modern house at center of the following image from Google Earth. A detailed search of land records may provide a plat detailing the position of structures on the original layout of the property. Compare the long shot with the full view of the tower, and this looks promising. Updated research shows location to be around 430 yards from the suggested location seen here. Go to the July 24, 2016 posting for correct location. For all intents and purposes, this is the neighborhood today. Previous posts here and here.
From this position, Confederate activities could be observed to the west and slightly southwest around Fairfax, roughly 9 miles away, Centreville at 15 miles and Manassas at 21 miles. 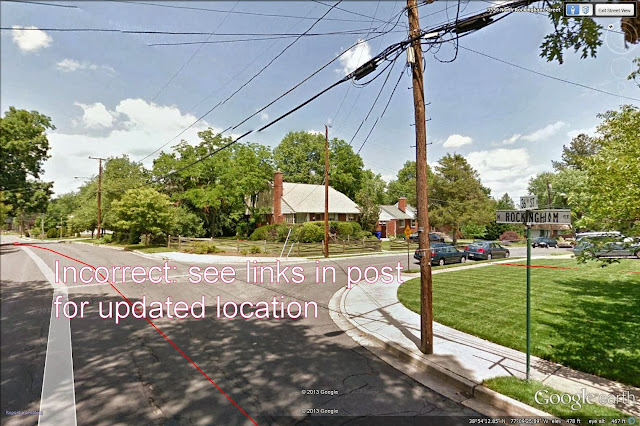 The above suggested location was proven incorrect in July 2016
by blog reader Stephen Masters.
The correct site is around 430 yards to the slight northwest of this intersection. 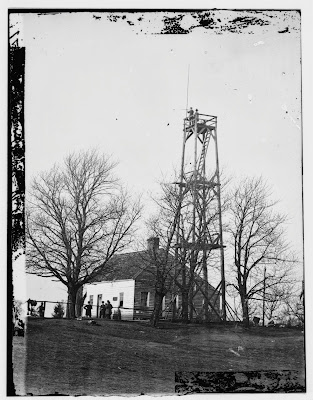 This home still exists after 284 years and is several hundred yards further down Rockingham st at the corner of Virginia Avenue and Nottingham. There are several additions to the home however the original structure exists behind the brick overlay. Unfortunately it is due to be demolished soon.