In his August 4, 2011 blog submission at Mysteries and Conundrums, F&SNMP chief historian John Hennessy included a "postwar view of the Landram Farm". The original source of this photograph is at this moment mislaid, but is very likely from a veteran or regimental memoir, and will surface soon or be recognized by one of our readers here.
The image itself is quite intriguing, illustrating the southern border of the Landram property as is runs along a roughly 230 yard straight stretch of the Mule Shoe Salient. The camera position is in the field directly in front of the obtuse "Bloody Angle" formed by an extension of the Union line as it hugged the outer wall of the Confederate parapet. The fence atop the earthwork served as a border between the Landram farm and that of the McCoull family. Imagining the likelihood that the property was similarly fenced when the armies arrived in May 1864, provides an explanation as to how the Confederates commenced building a line that did not follow the usual textbook prerequisite along a "military crest". At least in this section, a fence line bordering a heavy wood seemed more practicable.
An additional value of this image is that it allows a view of the ground before the placement of two Union monuments in 1902 and 1909. Check back at Mysteries and Conundrums soon for a new posting by historian Eric Mink which will examine another series of post-war images and visiting veterans.
Below, find a then and now comparison, looking roughly 69 degrees north east. Click on the images to enlarge. 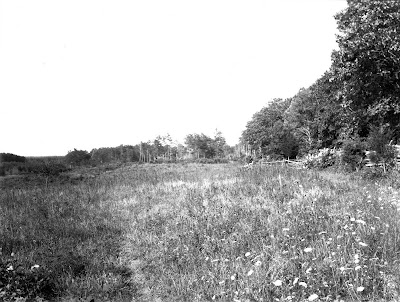 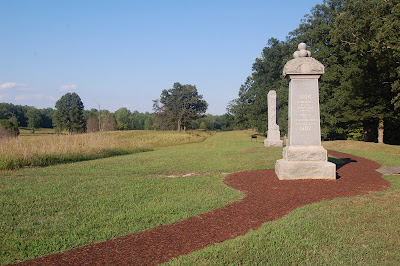