Much of the dramatic footage seen in the above video is compiled from the combined talents of John Hennessy, Chief Historian of the Fredericksburg and Spotsylvania National Military Park, and Media Magic Productions of Lansing, Michigan. The material was shot over several years locally, with many extras culled from the community, to produce three documentary films exhibited and sold at the Battlefield Park, Fredericksburg, Chancellorsville and Virginians Desolate, Virginians Free. John Hennessy wrote the script for the films and provided on-site consultation during the filming and post-production. A fourth film, on the Wilderness and Spotsylvania is in the formative stages.

John has also played a significant role in orchestrating the regional preparations for the Civil War Sesquicentennial. An indefatigable worker, possessed by an indomitable spirit, John personifies the term "multitasking". We can expect many great things over the next four years from John and the entire staff of the F&SNMP. 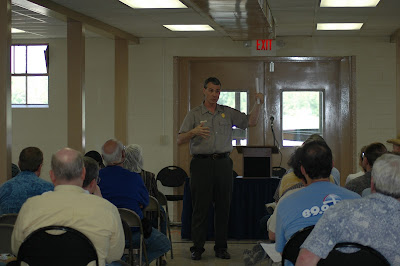 John Hennessy is seen above, lecturing on the local civilian experience
during the Civil War, at the 145th Anniversary Re-enactment
of the Battle of Chancellorsville, May 2008. Photo by Julie Bell.
Posted by John Cummings at 3:23 PM

Gravatar
While this subject can be very touchy for most people, my opinion is that there has to be a middle or common ground that we all can find. I do appreciate that youve added relevant and intelligent commentary here though. Thank you!

hi..
So nice to have found this article about our lovely area of Virginia, and one of locals favorite "hang-outs". Right-on. You pegged it. Thank you.