Work has begun on the bridge for the new trail along the Mule Shoe Salient. Volunteers from Boy Scout Troop 748 began the early morning project, led by Scout David Mattes, who ably designed the bridge on CAD software. Additional volunteers came from Troop 1048. Strict guidelines were provided by the NPS Chief of Maintenance. The guidelines required the bridge had to sit on the ground surface, supported by large stones brought in for the purpose. The only digging permissible would be at the bottom of each ADA compliant ramp.  The photo below shows the placement of the north side ramp, looking west, toward the Bloody Angle. The bridge passes through a possible sally port in the Confederate line. There are suggestions that this feature in the earthworks may have been an artillery gun emplacement, or possibly a passage cut through by a farmer after the war to access his fields. Page 97 from Union surveyor L. C. Oswell's field book plotting the Salient, makes no special notation for this feature. Oswell was one of several surveyors working under the direction of Brevet Colonel James Chatham Duane, mapping the Virginia battlefields in June 1865. Without seeing the feature noted on a wartime map its true nature may never go beyond conjecture. Nonetheless, it provided a minimally intrusive means of bringing visitors from the Union side of the works to the Southern interior. 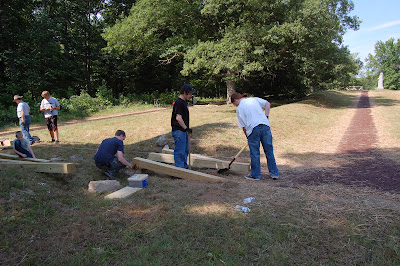 David's father, Scott Mattes, is shown below with his son's extensive design plans. 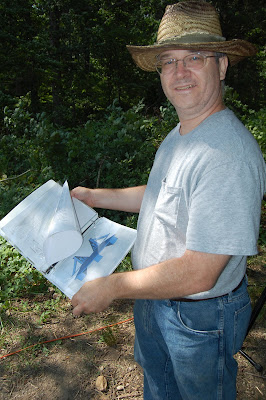 Below, the crew practices the old adage, "Measure Twice, Cut Once."
It is anticipated that the project should be completed by the end of the day, July 1st. 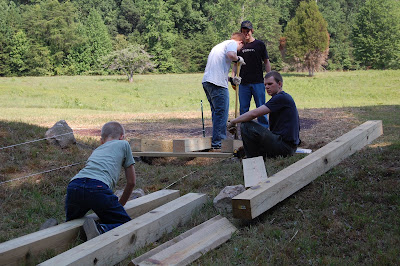 As the new bridge is constructed, the long standing Bloody Angle Bridge continues to provide access to visitors. This bridge will be removed as the new trail and interpretive signage are finished. 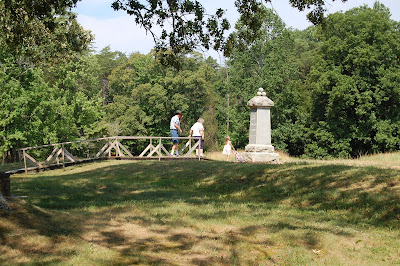 Future changes to the Park's interpretive program include the removal of larger, obstructive signs, like these known as "Happel Signs", named for the Park Historian who wrote the text for them, Ralph Happel. 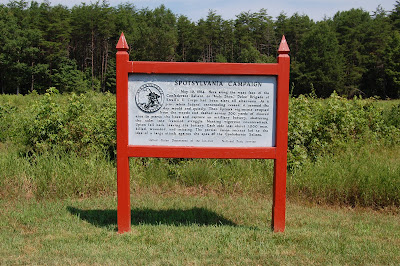 Other signage slated for removal are the much older, "War Department Signs", dating back to the days before the Parks were transferred to the National Park Service from the War Department in 1933. 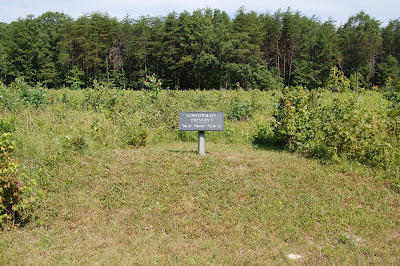 Seasonal Ranger Randy Washburn came up on his bicycle to observe the progress along the new trail. When stationed at the Spotsylvania Unit, Ranger Washburn rides his bike several times a day between the exhibit shelter at the park entrance and the Bloody Angle Stop to provide tours at 1:00 and 4:00. 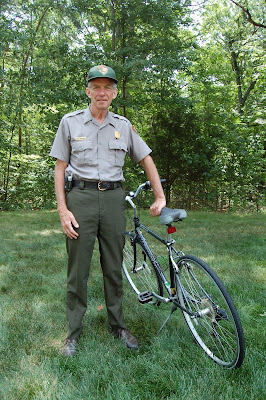 Posted by John Cummings at 6:30 PM

"Cut" in the works could have been made by either Carrington's or Tanner's batteries; both were located near the McCoull road and the West Angle - ref. The Charlottesville, Lee Lynchburg and Johnson's Bedford Artillery, Robert Moore, p. 43, sketch by Sgt Major Wilbur Fisk Davis. Today several caisson lunettes can be observed behind the SC monument and southwest of the McCoull trail.
R. C. M. Page mentions a "cut" made in the line when trying to explain why he could not recover Carter's captured guns the evening of May 12, 1864. ref: SHSP (1879) p.535-36.
It's not likely a "cut" for the farmer to move between fields. Edward Landram's 25 acres were in front of the West Angle. The McCoull/Fairchild farm was on the opposite side of the earthworks. This part of Fairchild's (later G.M. Harbert's) property was never a farmer's field. It was a shot-up forest after the battle. Ref:
SCH deed book AB p366, and book 83 p309, sketch made when sale was made for the Ohio monument and recorded in 1913. sketch shows a wire fence between Edward's house and the Ohio monument and another wire fence running parallel to works.
I have observed NPS lawn mowers using this "cut" over the years to move their tractors from one side of the works to the other (did they wear it down further?)

Thomas Carter, who commanded the artillery within the salient, left us with a clue to what this opening may be.
On May 11th he complained to both Gen. Lee and Gen. Ewell about the shape and layout of the Confederate line. To making his point he stated that when Upton's men attacked on May 10 his guns were unable to bear on the Federals to their left at Doles salient. To take them under fire he had to move guns out in front of the works. This was through a opening in the works made for that purpose.
Now Nelson's guns along that section of the line were withdrawn during the action. That withdrawal caused great confusion among the infantry trying to move from the right side of the salient to meet Upton's men.
Is this the spot for Carter's cut? Quite possibly. Yet it is also possible that his cut was eradicated when the Federals turned the works during and after they captured them on the 12th.